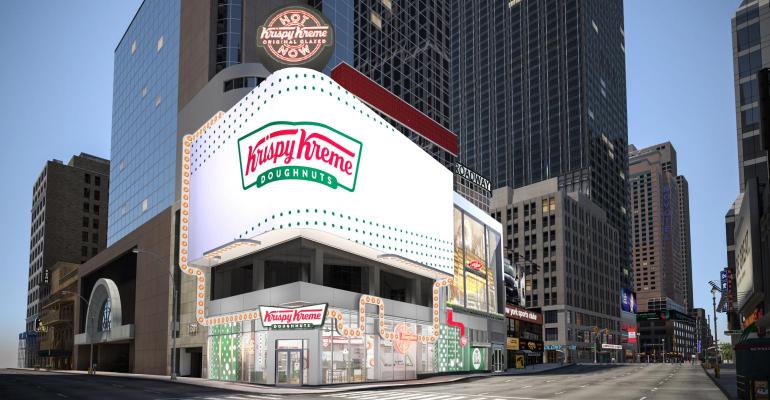 Krispy Kreme
The chain is moving to a hub-and-spoke model to deliver fresh doughnuts to more points of access.
News>Quick Service

Delivering fresh doughnuts to more access points around the world — and a price increase in September — has helped Krispy Kreme narrow pandemic-year losses and offset commodity and labor pressures in the third quarter, the sweet treat chain said Tuesday.

Fresh Krispy Kreme doughnuts are available at more than 10,000 locations around the world, an increase of 46% year-over year, the company said.

The growth in access points is an indicator that Krispy Kreme’s omnichannel hub-and-spoke network is working as the 83-year-old chain continues to move away from its legacy wholesale business to one in which freshly made treats are readily available in its shops, for delivery and at grocery stores and other retail “doors,” or points of access.

Krispy Kreme became a public company again in July after five years under JAB Holding Co., which remains a significant shareholder. Unlike some doughnut competitors that have shifted focus to beverages, Krispy Kreme has doubled down on its fresh doughnut offerings, using its “Hot Light Theater” shops and smaller doughnut factories as hubs in each market. Fresh doughnuts are made in the hubs and sent daily to a growing number of points of access, or “doors,” which could include grocery or other retail stores, food trucks, carts and other snack spots.

Economies of scale from adding more than 3,000 points of access globally in the last 12 months and a price increase in September helped Krispy Kreme offset wage and commodity inflation, the company said.

“Our third quarter results demonstrate the benefits of our omnichannel and global expansion strategy, which allow us to meet consumer demand with premium, fresh doughnuts, in a capital-efficient manner,” said Mike Tattersfield, Krispy Kreme’s president and CEO, in a statement. “We are seeing positive momentum continue into the seasonally strong fourth quarter, as consumers sought out our sweet treats throughout October for Halloween and are expected to do so through the holidays. In addition, our pricing power means that we are able to quickly adapt to this inflationary environment with the full impact of the pricing action we have already taken still to come in the fourth quarter.”

In the U.S. and Canada, net revenue grew 11% to $225.8 million. The company added fresh delivery to 150 more locations during the quarter, despite driver shortages.

The company reported a net loss of $5.7 million for the quarter, or a loss of 4 cents per share, compared with a loss of $14.9 million, or a loss of 12 cents per share, a year ago. But net income would have been positive if not for expenses tied to the initial public offering in July and the acquisition of a franchise operator in Canada. Adjusting for those costs, net income grew 7.1% for the quarter to $12.6 million.

With help from proceeds from the IPO, the company was able to knock down debt by about 40% to $681 million.

The company reaffirmed guidance for the full year, expecting net revenue between $1.34 billion and $1.38 billion; and adjusted net income of $62 million to $68 million.