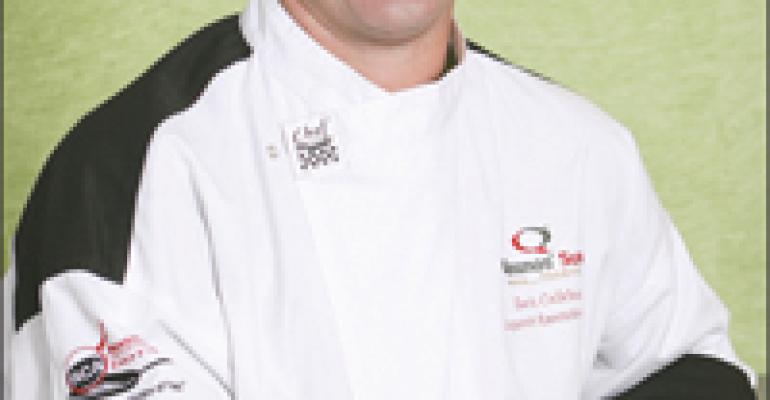 Zach Calkins, who joined the Quiznos Sub chain after many years as a fine-dining chef, has a keen eye for the way food trends trickle down, and he’s confident he can take advantage of the phenomenon.

He looks for an ingredient or dish that is all the rage at posh eateries and then works to incorporate it into the Quiznos menu before the competition can do so.

“I always feel like we’re about a year or a year and a half behind fine-dining trends,” says Calkins, the company’s director of culinary development.

Calkins, whose career includes a stint at the Coyote Cafe in Santa Fe, N.M., with celebrity chef Mark Miller, says he deconstructs and then reconstructs these fine-dining trends.

“I think it’s going to be who is going to find the next diamond in the rough, polish it up, and launch it and do the right thing with it.” Calkins says.

The chain’s most recent rollout exemplifies Calkins’ deconstructionist strategy. The Steakhouse Beef Dip Sub, introduced early this year, is a reconfigured French onion soup. Calkins saw a demand taking shape for high-end sandwiches that could be dipped or dunked. After some experimenting, he zeroed in on the French onion soup concept. To deliver that soup’s flavors, he developed a dressing with caramelized onion and notes of garlic and beef, used a double portion of meat, topped it with Swiss cheese and let the toasted bread act as the crouton.

Marketing for the sub made no mention of soup, but some Quiznos customers have caught on.

“Whenever I get an e-mail or phone call from a customer saying it reminds them of French onion soup, I say, ‘You got the joke,’” Calkins says.

REGION: United States and 21 other countries

BEST SELLER:Prime Rib “Cheesesteak,” which has a double portion of thinly sliced prime rib and melted Swiss cheese, sautéed onions and mayonnaise; and the Prime Rib and Peppercorn Sub, which comes with mozzarella and peppercorn sauce, both were launched early 2006 and are $5.29 for small to $9.99 for large

Quiznos’ line of Flatbread Chopped Salads, which debuted in the spring of 2006, were also inspired by the popularity of such salads in full-service restaurants, he says.

About a year after that launch, a USA Today article testified to the growing popularity of restaurant menu items featuring flat breads, reflecting Calkins’ strategy of identifying trends early.

A three-member team works under Calkins to investigate his trend observations and predictions. One person monitors health-related trends, a second member looks at the “indulgent part,” Calkins says, while a third watches value-related trends.

Products are developed based on the group’s findings and then tested on consumers for possible launch.

In scoping out trends, Calkins reads new cookbooks, looks at menus on the Internet and travels. During a July trip to Britain, for example, he noticed a particular abundance of grab-and-go food options. He says he expects that trend to accelerate in the United States, and Quiznos is responding accordingly.

For the chain, that will mean a greater number of Quiznos branded coolers at franchises and in other stores and businesses. Quiznos is busy developing products that can sit in a cooler for hours at a time. Naturally, this will exclude Quiznos signature toasted breads, and might instead mean the increased use of flat breads or wraps, Calkins says.

Another way Calkins works to predict trends is to monitor what’s hot in travel destinations. If Americans are flocking to Spain these days, he says, Quiznos may come out with a product reflecting that country’s cuisine.

Regarding other hot ethnic foods he says, “Indian food and North Africa and the styles of Morocco and such are really untapped. I think they will continually increase in the marketplace as people become more comfortable understanding the cuisine and spices and that they are actually very good and it’s not all about curries and stuff like that. Also, as the Hispanic population continues to grow, there’s still going to be an untapped market.”

Seasonal offerings may be showing up more at Quiznos and other quick-service restaurants, he adds.

“We’ve got to start looking at things like seasonal soups and sandwich builds,” Calkins says. “That way you really freshen up the menu. As Quiznos continues to grow and we get more distribution centers it makes it a lot easier to do that type of stuff.”

Quiznos will also reintroduce healthful options after customers clamored for their return.

“We took some of our healthy options off the menu, and we’ve heard a lot of noise from our consumers saying, ‘Why did you take our light and low-fat dressing away?’” he says. “So you will definitely see a lot of that addressed before the end of this calendar year.”

In July, he began appearing in Quiznos television commercials, with his name and title shown as he whisks a bowl and later bites into a sub.

“It’s putting a face to the brand,” Calkins says. “It’s saying: ‘We do have a real chef and we are passionate about food.’”