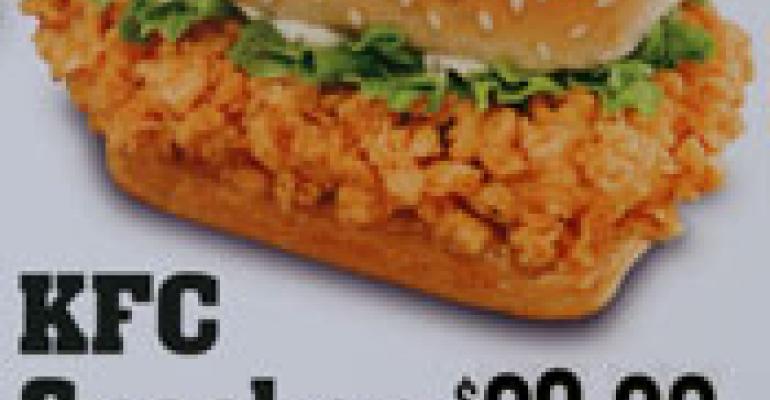 Yum pledges to post calorie counts for all 5 brands

LOUISVILLE Ky. Yum! Brands Inc. said Wednesday it will post per-serving calorie counts on the menu boards of all company-operated domestic units within its five quick-service chains by 2011.

The company indicated that it would encourage franchisees to add the information as well. Yum’s brands include Taco Bell, KFC, Pizza Hut, Long John Silver’s and A&W All American Food. The chains encompass almost 20,000 U.S. restaurants, consisting of 3,710 company-operated units and 16,086 franchised and licensed stores.

Each Yum brand already offers a “Better for You” menu of what are promoted as healthful items.

Yum is believed to be the first restaurant company since Ruby Tuesday Inc. to adopt nutrition disclosure across all its operations. Ruby Tuesday added the information in April 2004 to the menus of the 700 restaurants it then managed, but pulled it a few months later. Observers said the chain was alarmed by the effect on sales of several high-margin, high-calorie items, including burgers and ribs.

Yum’s announcement was the latest in a series of labeling-related developments for the industry during the past week. On Tuesday, California became the first state to mandate nutrition disclosure by chains, starting next July. That measure was supported by the industry.

Last Thursday, Sen. Thomas Carper, D-Del., introduced a federal disclosure bill. The measure, which would take effect two and a half years after enactment, is favored by the industry because it would pre-empt a patchwork of local and state labeling requirements. Yum said it, too, favored a single federal mandate to a varying collection of local mandates.

“We now call on the U.S. Congress to enact federal legislation that would create uniform menu board guidelines for all who sell prepared food so there is a consistent way to educate the public about the nutrition value of the food they eat,” said Jonathan Blum, Yum’s chief public affairs officer.

Yum’s announcement was praised by the Center for Science in the Public Interest, an outspoken consumer advocacy group, for taking what it termed a “groundbreaking” step.

“Yum is leaping ahead of all its competitors by providing the one piece of nutrition information that consumers most want, calories,” CSPI executive director Michael Jacobson said in a statement.