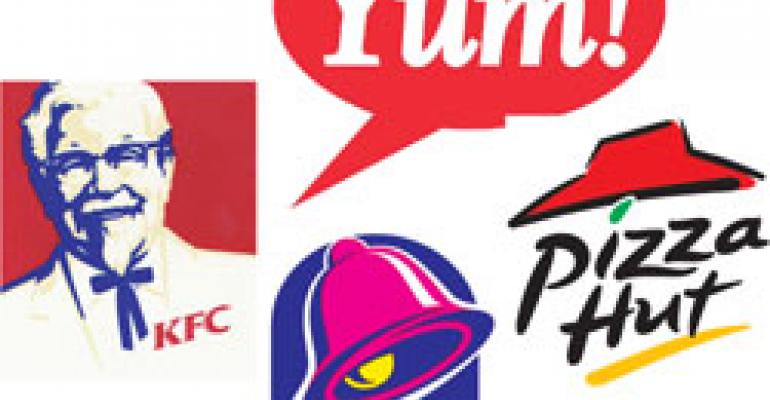 Company officials were not available at press time to comment further on green initiatives going forward, but the report indicated that Yum plans to explore the conversion of its fryer oil into biodiesel fuel, build more sustainable restaurants and continue to reduce its energy consumption. —

The report also stated that Yum is trying to reduce its worldwide environmental impact by implementing equipment retrofits and energy-efficient innovations, employing better energy and waste management systems, and recycling paper and other packaging. —

“We believe energy reduction is the No. 1 area of greatest environmental opportunity and highest cost benefit,” the report said. “Our top priority in the coming years is to reduce our energy usage by 12 percent by 2012 in company-owned restaurants.” —

The report stated that Yum intends to finish its conversion to more efficient lighting at its Pizza Hut units by year-end. It will also install high-efficiency air conditioners in new restaurants and replace the cooling systems at existing units with programmable thermostats to optimize comfort and minimize usage. The report also said the company is evaluating the installation of devices that increase the efficiency of air-conditioning evaporators and refrigeration systems at its stores. —

In addition, the company is planning to install high-efficiency Energy Star fryers at all of its domestic WingStreet restaurants as well as new pizza ovens that reduce gas usage up to 15 percent at its Pizza Hut units. —

“Based upon our estimations, we anticipate a reduction in 2008 of over 15,000 metric tons of carbon emissions per year due to our installation of these devices,” the report said. “An average Yum restaurant emits over 200 metric tons of [carbon dioxide] annually from energy use. We are committed to exploring the options available to us to reduce [those] emissions.” —

Other plans call for the design in Northampton, Mass., of the company’s first green building, a KFC/Taco Bell co-branded unit that will adhere to Leadership in Energy and Environmental Design, or LEED, certification specifications. —

“Our view is that the dynamic nature of societal and environmental changes—some predictable, some not—requires us to anticipate, understand and respond meaningfully,” said David C. Novak, Yum’s chairman and chief executive, in a written statement that accompanied the report. “That makes us stronger and better as a company and as a responsible citizen of the world community.” —

Louisville-based Yum operates or franchises more than 35,000 restaurants worldwide, including about 17,825 in the United States. —