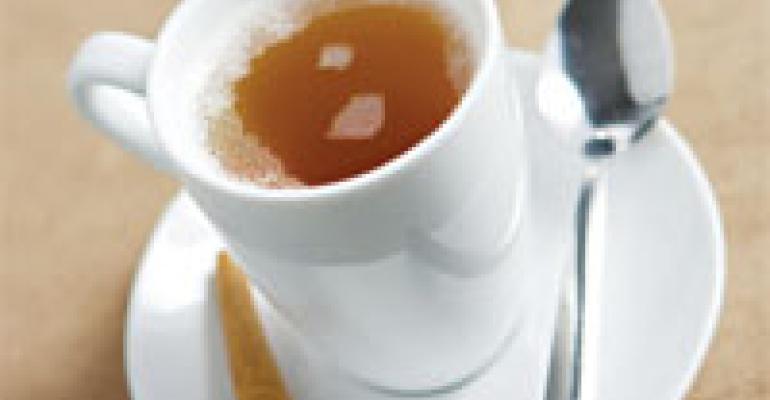 Traditional winter warmers, like Irish Coffee and spiked cider, have doggedly stayed in fashion, especially in colder climates, even as overall cocktail trends have ebbed and flowed. Until recently, few creative alternatives to these old favorites were available. Now, however, they are joined by a variety of options.

Viand had served variations on Irish Coffee before, but this year the offerings have been expanded to include cider-based versions of old mulled-wine recipes sharpened by infused spirits and the addition of house-made syrups. The beverages are developed by Budrow and chef Steve Chiappetti.

The drinks, both $11, are the Spiced Steaming Bulleit, made with bourbon-infused orange peel, cinnamon, cardamom, clove, honeycomb and apples, and mixed with hot apple cider, and the Michigan Apple, made with house-made spiced rum, cinnamon-infused caramel syrup and hot apple cider.

“We’ve seen huge growth with the Michigan Apple and the Spiced Bulleit,” Budrow says. “With the change in weather, whenever you appeal to people with flavors they associate with a certain time of year, that usually breeds success.”

At the four-unit, Indiana-based Scotty’s Brewhouse, the most popular winter warmer for years has been the Hot Woodchuck Cider, which sells for $3. It is made by heating a mug of a commercial cider and adding a cinnamon stick, says Amber Martin, the company’s beverage and promotions director.

It’s back on the menu this year, but with two of the company’s units now able to sell liquor, two new hot drinks are on the menu. The first is the Rock & Rye Toddy, for $12, which is rock candy-infused rye whiskey added to a hot mix of bourbon, bitters, cinnamon stick, orange and lemon peels and nutmeg. It is garnished with a lemon slice, nutmeg and a rock candy stick. The other drink is the $7 Down the Chimney, made with butterscotch liqueur, hot cocoa, milk, honey, vanilla, nutmeg and butter with a cocoa-powdered rim. Both are served in Irish coffee mugs.

“Repeat customers look forward to the Hot Woodchuck each year, and so far Down the Chimney has also been getting a great response,” Martin says. Short-lived seasonal drinks like these demand extra promotional effort–Scotty’s uses in-store signage and email blasts–and staff must be educated about them and reminded that they are on the menu if the items are to succeed, she adds.

At the Brandy Library in the Tribeca area of New York City, where brown spirits like whiskey and cognac are celebrated, a hot beverage has made its way onto the seasonal $13 beverage menu with the Eclipse, made with Armagnac, hazelnut liqueur and hot chocolate.

Cider, coffee, tea and cocoa all play a role in the winter drinks served as part of the Big Chill promotion at Washington, D.C.’s Morrison-Clark Historic Inn and Restaurant. Every Thursday evening in the Victorian mansion’s Drawing Room, the new drinks sell for $10. They are also available daily by request.

The gas fireplace-lined Drawing Room makes a great setting for this program, says hotel general manager Rob Suter. Started in early November, the mix of traditional and contemporary recipes was designed “just to change things up a little bit,” Suter says. “We wanted a little fresher of an idea for the Big Chill and not just the same old traditional things.” Presentation matters with high-priced winter drinks; in the case of the Morrison-Clark, each is served in a different style footed glass.

At Pazzo, a fine-dining Italian restaurant in the Kimpton Group-owned Hotel Vintage Plaza in Portland, Ore., chef John Eisenhart last year came up with the $7 Timberline Toddy, made with eau de vie of Douglas fir, chamomile tea and local wildflower honey, garnished with a rosemary sprig and lemon wheel.

“Our drink menu changes seasonally, and we try to have fun with it. I have a hefty hand in making the garnishes and bitters and things like that for the bar. It keeps me entertained outside the kitchen,” Eisenhart says.

The locally-produced Douglas fir eau de vie was Eisenhart’s inspiration, and the Timberline Toddy has become a popular caffeine-free late-night drink option. This year it has returned, and Eisenhart is contemplating a new iteration combining the flavors of pear with the distinctive pine.

At Fenouil, a French restaurant in Portland’s Pearl district, mixologist Daniel Stern offers a few traditional winter warmers, like hot buttered rum, spiced cider and glug. This year he’s also added a chamomile tea-based drink, La Nuit, made with triple sec, cognac, crème de cassis, chamomile, cinnamon stick and lemon twist, served in a snifter. It sells for $8. Another option is L’Épice, $9, a mix of high-proof Austrian rum, chocolate liqueur, simple syrup, coffee, whipped cream and orange peel. For the presentation, the glass is rimmed with cardamom tincture and sugar. The tincture is made by soaking toasted, cracked cardamom seeds in vodka for a week.

Even some of the most cutting-edge mixologists turn to tried-and-true methods as the temperature drops. At the Mint in Portland, owner Lucy Brennan is known for drinks like the Avocado Daiquiri, but when it comes to the winter menu, she focuses on classic coffee drinks, like the Spanish Coffee, made by flaming high-proof rum with sugar in a glass until the rim caramelizes, and adding triple sec, coffee liqueur, French press coffee, vanilla-flavored whipped cream and nutmeg.

“People here really are serious about their coffee, and I like coffee drinks, too, so we stick to them for the winter,” she says.