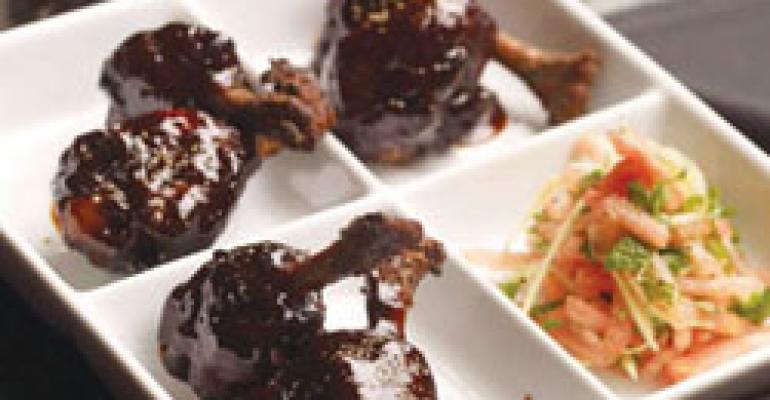 Given Americans’ propensity for food that is easy to eat and doesn’t remind them of animal parts, the popularity of the chicken wing could be considered a marvel.

Messy, sticky, containing bones and very much resembling an appendage on a large domesticated bird, chicken wings—which not too long ago were generally clipped off of the breast and tossed into stockpots—are now the most popular appetizer in the United States, according to Foodbeat, having surpassed nachos a couple of years ago.

First popularized in the city of Buffalo, N.Y., where they were deep-fried and tossed in a blisteringly hot and tangy sauce, and designed to be eaten with beer, chicken wings’ horizons have expanded into fine-dining and specialty concepts, with particular innovation happening in Asian restaurants.

Many Asian cultures have longstanding traditions when it comes to chicken wings, which, because of their high bone-to-meat ratio, tend to be very flavorful. Japanese taverns long have served them grilled with salt, and Thais stuff them with pork.

At Izakaya, a restaurant that opened this summer in Atlantic City, N.J., executive chef Michael Schulson, who lived in Japan, is duplicating wings he found in that country’s Kinki Prefecture.

First he cures them in salt, sugar and five-spice for two to three hours. Then he washes them off and slowly cooks them in duck fat.

Then he air-dries them in the walk-in refrigerator and deep-fries them to order.

At CatHouse at the Luxor in Las Vegas, chef Kerry Simon follows a similar process, although he actually uses drumettes rather than wings. He slow-cooks them in duck fat until tender, and then chills them. He fries them again at pick-up and tosses them in a sort of teriyaki glaze finished with black pepper. He serves the dish, $13, with a watermelon rind salad, made by marinating thinly sliced rind with vinegar and spices.

At Rhong-Tiam, a Thai restaurant in New York City, a traditional dish of chicken cubes wrapped in pandan leaves and deep-fried is modified by wrapping the leaves around wings instead. The “Southeast Asian Style Buffalo Wings” are $5.

The “spicy Thai fried chicken wings” at Spice Market in Atlanta are a bit more involved. There, Ian Winslade marinates wings in a mixture of soy sauce, lime juice, fish sauce, garlic and red chiles for about four hours. He drains them and then rolls them in whipped egg white and then seasoned flour. He fries them at 325 degrees Fahrenheit.

“The flour on the outside gets nice and crispy-crunchy, but it stays moist on the inside,” he says. He makes a sweet, sour and hot sauce by frying garlic and shallots and then adding dried red-finger chiles, galangal, shrimp paste and sour tamarind pulp. He flavors that sauce with palm sugar, vinegar, fish sauce and lime juice, “but most of the liquid comes from the tamarind,” he says.

The sauce is puréed and strained and the chicken is tossed in it. It’s served with sliced mango topped with a mint chiffonade for $9.

“After you eat the wing, you take a bite of the mango,” instead of the celery that you would eat with a Buffalo wing, Winslade says. “It’s super-spicy and really tasty.”

Michael Leviton’s red-curry wings at Persephone were invented because of an after-hours tradition at his other restaurant, Lumière. Both restaurants are in Boston.

At the end of the evening, Leviton and his staff would take scraps from the evening’s service, deep-fry them and eat them. One night they had been serving chicken breast, and so they had leftover wings.

“We didn’t have any hot sauce, but we did have a red-curry vinaigrette for our steak tartare,” Leviton says. “That was the impetus of the dish, probably about eight years ago.”

The sauce is made with red-curry paste, lemon grass, rice vinegar, fish sauce and canola oil. It was inspired by a Thai red-curry beef salad, which he modified into a tartare in order to capitalize on every bit of trim from a very expensive dry-aged New York strip he was using at the time.

The wings are brined for a couple of hours in a solution of one-eighth cup of salt per quart of water. Then he par-fries them. At service he fries them again, “sort of like French fries, to crisp them up,” Leviton says. He serves them at Persephone’s bar for $8.

Not every new-fangled wing is inspired by Asia.

He drains them and then rubs them with paprika, cumin, salt, garlic powder, cayenne and other spices. He lets them sit for an hour.

Then they’re put in a smoker with half hickory and half apple wood.

He smokes them for an hour, and then at service he grills them “and start charring them a little bit,” he says. He serves them in hot or mild house-made barbecue sauce along with the classic accompaniments of celery sticks and blue-cheese dressing.

Freedman says brining the wings makes them moister, and the sweetness and tartness of the apples go well with the chicken.

“People really flip out on these things,” he adds.

At Perennial, in Chicago, chef Giuseppe Tentori offers a $9 dish called “wings & beer,” although he, like Simon, uses drumettes.

“We take a chicken leg and confit it and then deep-fry it à la minute,” Tentori says.

He tosses them in a gastrique made with sugar, sherry vinegar, Thai chile and star anise. He plates them with a slaw of green cabbage, carrots and house-made mustard.