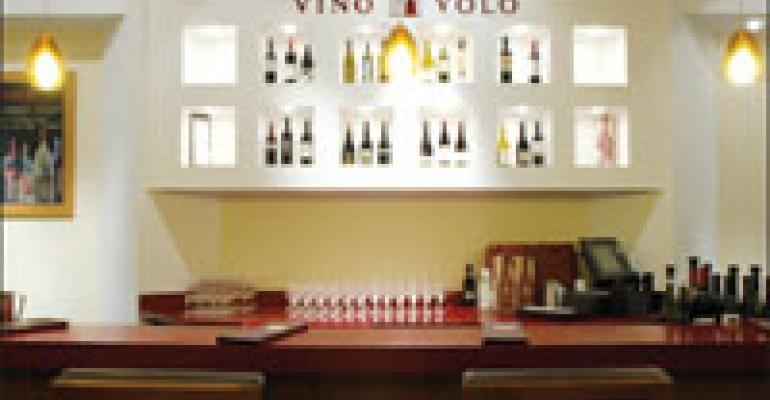 Given flyers’ longer airport dwell times and increasingly sophisticated palates, fledgling concepts such as five-unit Vino Volo and four-unit Cibo Bistro & Wine Bar are finding a captive audience eager to pay for a fine glass of wine during their travels.

“Previously, bars at airports were geared more toward male travelers than females, but Vino Volo is more gender-neutral, more attractive to females even,” he said. “It also tends to be more cheerful and doesn’t look like your typical airport bar. I think you’ll see this niche evolve over the next two or three years.”

According to a study commissioned by the International Wine & Spirits Exhibition, within the next three years Americans are expected to drink nearly 766 million gallons, or 3.8 billion bottles, of wine, making them the largest group of wine consumers in the world.

“People are definitely more sophisticated now,” said Lillian Tan, vice president and general manager of Marketplace Development, the concessions arm of New York’s LaGuardia Airport. “Quite frankly, we tried to introduce a [wine bar] concept 13 years ago, but the market wasn’t ready for it. Things have changed dramatically since then. Back then, we tried to put it together with some wine purveyors and retail operators, but there wasn’t enough buy-in for the idea. They didn’t think it would work.

Tan said that about 25 million people fly in and out of LaGuardia each year, and retail sales per enplaned passenger average around $10. She projected that alcohol sales at the airport’s seven retail outlets, where many wine lists have been expanded, will be about $5 million in 2007.

San Francisco-based Taste Inc. and Philadelphia-based OTG Management are among those operators capitalizing on wine-loving voyagers with wine bar concepts.

Tomlinson said Vino Volo, which is roughly translated to mean “wine flight” in Italian, has been well-received by frustrated travelers looking to pass their layover time in a more stress-free fashion.

“In the airport world, a concept like this one has been much overdue,” he said. “It is time to really upgrade the time spent waiting for a flight or between layovers. We really wanted to target that gap and give people needing something to do before their flights an opportunity to learn more about and enjoy wine.”

OTG Management introduced its Cibo Bistro & Wine Bar concept approximately five years ago, but decided to upgrade the wine list to include more high-end varietals about 10 months ago.

OTG hired consultant Steve Olson last year to revamp the concept, which operates two units at Philadelphia International and one each at LaGuardia and Ronald Reagan Washington National airports. The new program offers 36 wines by the glass, including everything from an Australian Shiraz to a French Pinot Noir to a German Riesling. Prices range from $7 to $14 per glass and $29 to $54 per bottle. In addition to the wine, the menu includes an extensive list of beers and premium cocktails. Cibo also offers premium Italian food found in a traditional trattoria setting.

“At our wine bars, 40 percent of beverage sales are from wine, and we believe this is because the selections have been upgraded,” Olson says. “In the last 10 months, we’ve seen a huge jump in sales. It’s been a quantum leap.”

“People are watching the Food Network; they love great food and are fascinated with chefs,” Olson said. “Drinking wine is a step toward growing more sophisticated in their dining habits. For six years in a row wine consumption has been up, and that’s not just because we’re drinking more. We’re drinking better. Plus, a lot of young people are drinking and learning about wine.”

Taste Inc.’s Tomlinson, who would not reveal Vino Volo’s annual sales, said the idea for the concept was born of his own personal frustration. An oenophile who worked as a management consultant for Deloitte, he was returning from a business trip in 2003 and wanted a good glass of wine while in between flights. Unable to find one, he realized he’d stumbled onto a niche-worthy idea.

“That’s how the genesis of the idea came to me,” he said. “I’m an avid wine student and lover, and I quickly realized there were not enough places [in airports] that offered a good glass of wine at a reasonable price.”

All of the units are located in the post-security areas of airports and average between 1,000 square feet and 1,200 square feet in size. The stores, Tomlinson said, were designed to reduce stress by featuring plush, comfortable armchairs, wooden bar counters and ivory-colored walls.

In addition to selling wines by the glass, each unit offers flights of wine consisting of three small pours that are the equivalent of one glass. Featured wines are from California, New Zealand, Italy, France, Argentina and Spain. Depending on the location, regional varietals are sold as well. Wines by the glass range from $6 to $45, and flights are priced between $6 and $28.

“The wine menu is designed to appeal to all customers,” Tomlinson said. “We try to treat every customer like a VIP.”

“There has always been a demand for quality, but if you look at today’s demographics, you’ll find most passengers are fairly affluent and will pay for quality products and services,” he said. “Concessionaires are finally catching up with that.”