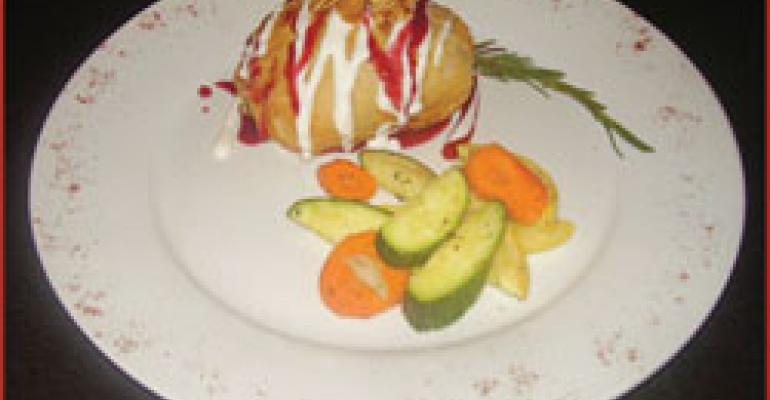 Like a seasoned Hollywood character actress, the humble cranberry is capable of performing in many types of roles. Even if not cast as the leading lady, the fruit can receive raves as a tart foil to overly sweet or rich ingredients.

And every now and then, it even steals the show.

“It’s such an easy fruit to work with,” says Tami Lax, owner of Harvest Restaurant in downtown Madison, Wis. “The reason I like it so much is you can go both sweet or savory with it. Its characteristics really carry through any way you’re going to go.”

That’s true at the appropriately named Cranberries Cafè in Goodrich, Mich., where the menu features up to a dozen cranberry-theme items year-round and more during the restaurant’s annual Cranberry Week celebration in November. Offerings range from the best-selling cranberry bread pudding to a spinach salad studded with dried cranberries, apples, oranges, cheese and walnuts to the restaurant’s signature cranberry vinaigrette. The dressing is made with dried cranberries cooked down with vinegar and blended with salad oil and sugar.

Another popular dish at Cranberries Cafè, scheduled to make an appearance for Cranberry Week, is a dish chef Mitch Plant calls Cranberry Wellington. Plant tops poached chicken breasts with a blend of poached cranberries and cream cheese, then wraps the whole thing in phyllo dough and finishes it in the oven. It’s served with a sweet cream sauce and cranberry sauce made with cranberry juice.

Back at Harvest Restaurant, Lax is considering featuring a dish that has run in the past, duck confit with cranberry gastrique. Lax likes the way the gastrique, a tart-sweet reduced sauce made with fresh cranberries, vinegar and sugar, balances the richness of the duck. Lax prefers organic cranberries, which she believes have brighter color and a better, more complex flavor profile than their nonorganic counterparts.

Bob Menendez, chef-owner of Sunset 44 Bistro in Kirkwood, Mo., also has paired cranberries with confit, though his preparation initially used chicken confit. He later adapted the recipe to pork tenderloin, and the dish became one of his signature items. Menendez serves the sliced tenderloin on top of a chutney made with cranberries, brown sugar, dried currants and apricots, cinnamon, cayenne pepper, cranberry juice, and fresh ginger. He accompanies the dish with Japanese sweet potatoes and red cabbage.

The cranberries “help to balance the sweetness in these kinds of dishes,” Menendez says. He cautions against overcooking the cranberries.

“You want to feel the berry, so it’s a matter of cooking them until they pop open but not turn to mush on you,” he says.

Cranberries take a decidedly elegant turn at Spago in Los Angeles, where chef de cuisine Thomas Boyce plans to pair a compote of cranberries, verjuice and sugar with pumpkin soup. First, a dollop of compote and a few dots of pumpkin seed oil will be put into a soup bowl. At the table, the server will pour the soup around the compote. The dish gets topped with a cardamom-flavored crème fraîche quenelle.

The tartness of the berries, along with the sweetness that’s almost always added to tame them a bit, is often seen as a good complement for game. At Tamarind in New York, K.P. Singh, head chef for the restaurant’s tandoori section, cooks cranberries into a thick sauce to serve with venison.

At Spago, Boyce also is considering a way to take advantage of game. He’s thinking about making a compote of cranberries and huckleberries, perhaps seasoned with fresh bay, cinnamon and star anise, or a little clove or ginger, to be served with braised rabbit and fall mushrooms. In the past, he’s also done a quince and cranberry compote, made with mustard or cinnamon, to pair with venison.

While the “Cape Cod,” cranberry juice with vodka and often lime, is a bar staple, some restaurants are putting the cranberry to work in new beverages for pre-, mid- or post-prandial enjoyment. Menendez of Sunset 44 Bistro has used cranberries in the brew for iced tea. Customers can sweeten the resulting drink to taste.

At Cranberries Cafè, Patty Plant, who is married to chef Mitch Plant, says cranberry margaritas are popular. She also offers cranberry cordial as an after-dinner drink for the restaurant’s Cranberry Week. To prepare the cordial, Patty Plant macerates fresh cranberries in vodka with sugar, then strains the mixture.

“It is absolutely the most ruby red color, very sweet, a nice sipper.”

Mitch Plant currently is working to develop a cranberry eggnog that he envisions might grace the menu from Cranberry Week through the holidays. He plans to infuse poached cranberries into half-and-half through slow heating, and then add eggs and brandy to the mixture after it’s cooled.

At Legal Sea Foods, a 34-unit Boston-based chain, the Cranberry Bog Lemon Martini has been the most popular drink of the “Raising the Bar” program that features drinks based on fresh purées and custom-made mixes. Pastry chef David Topian prepares a purée from fresh cranberries at the company’s Boston “Quality Control Center” and distributes it to units in vacuum-packed bags to ensure systemwide uniformity. Each drink is then prepared to order by shaking together citrus-flavored vodka, cranberry purée, angostura bitters and sour mix, which Topian also prepares. The resulting mixture is strained into a martini glass and garnished with fresh cranberries.

“We find it’s a nice aperitif,” says Sandy Block, Legal Sea Foods’ vice president of beverage operations. “It’s not that sweet. You taste a little bit of sugar, but it’s not that sweet that it’s going to be too heavy and coat your palate before dinner.… Cranberry has that nice combination of savory, tart and slightly sweet flavors that seem to work as a palate opener.”