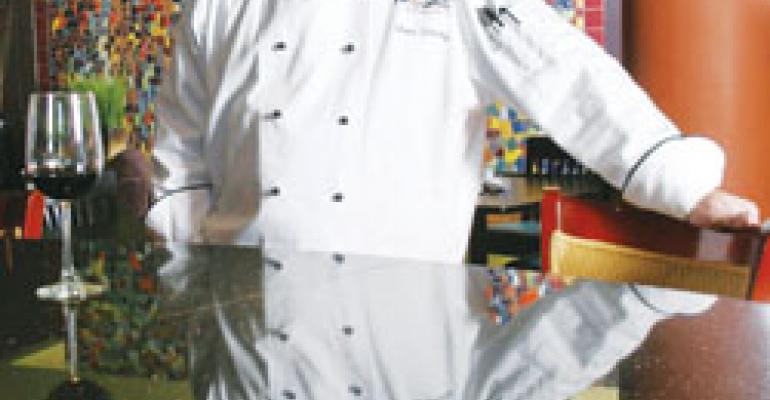 Under the Toque: Schmitz says Mosaic’s small-plates concept has wings

As chef-owner of Mosaic Modern Fusion in St. Louis, Claus Schmitz specializes in small dishes inflected with the flavors of the world, a world he knows all too well.

Born and trained in Germany, he slipped away at 18 to work at hotels all over Europe. Next came Bermuda and then Australia, where he put down roots, for a while at least. After a stint selling computers and running the food and beverage operations of the Sydney Opera House, the boy from Stuttgart quickly climbed the corporate ranks of Australia’s largest hotel company.

He also made trips to visit his brother in the United States, where he met his future wife and eventually moved to St. Louis to be with her.

How do you get from being a bigshot executive to opening a relatively small restaurant?

It is a completely different thing. [Then] I was responsible for millions of other people’s money. You start to use your own money, [and] it alters immediately. You try to be successful, and sometimes it works and sometimes it doesn’t, and it’s not always up to your own abilities. It’s the people around you who make it successful, and I was lucky to have really good people. In fact, they’re still with me after four years now. I would have loved to open a hotel, but I didn’t have the capital to do it, so I opened a restaurant.

How did you come up with the idea of serving small plates?

My idea was always not to give them so much food that people walk away too full. There is an idea that Americans [go for] value for money at all costs. But we do 80,000 people a year. They eat [our food] because it’s refined and elegant and it tastes good, and the portion size is small enough for them to feel good about it.

Let me illustrate this: If you look at the number of desserts sold in this country, they have gone backwards for years. So restaurants didn’t focus on them because desserts weren’t selling. We, on the other hand, are selling so many more than I would have ever thought possible—we sell them for $7, so it’s not terribly cheap either—and the reason for that is that people aren’t buying big units of spaghetti, trying to eat them and then taking half of it home and thus have no space for dessert. What we do is introduce them to new things, and that’s what I love about the small plate size. Everybody buys two or three units, and then they put it on the table. Even if they don’t share, they see it. It’s “feasting with your eyes” as my mum used to say, and they experience it so differently than if they were to go to a chain restaurant’s salad bar.

What’s the difference between customers in St. Louis and diners in Sydney?

I think people in Sydney have a different relationship to food. It is a bit more like the Europeans. It is not out of necessity that they go out; it is out of pleasure.

You think Americans lack pleasure in their dining experiences?

There is a danger with generalizing too much, but I feel that what we do gives them the pleasure of eating. The big upscale chain restaurants lack atmosphere and the whole esoteric individualism that independents can offer. And it lacks the pleasure principle. I think that as time goes by Americans will adopt a lot more of the pleasure of eating rather than the I-must-eat, the-biggest-value-for-the-money kind of deal.

You have also signed a deal with HMSHost to open a Mosaic at the St. Louis airport in 2009. Is it going to have the same concept as the flagship restaurant?

Use green cardamom in place of or alongside vanilla in desserts. It has a similar sweet aroma but more complexity.

Yes it will, with some slight modifications of course. At the airport, it’s a 2,000-square-foot property rather than my usual 4,000 or 5,000 [square feet], and naturally because Host is doing it there’s all sorts of federal regulations, and different rules apply for labor and stuff. And the skill levels at the airport are questionable. I don’t want to say we want to dumb it down, but it has to be simplified and modified a little, and that’s why you won’t have the full complement of what we do. But it’s the same idea, the same quality.

There’s no shortage of opportunities, but I learned very early in my corporate career that if you’re out there in the lead, you’re likely to get your nose slapped. You’ve got to do this stuff cautiously, especially right now. The business plan was for multiple sites. I believe that once you establish your brand—we have done this in St. Louis with Mosaic—people identify that with good food.

I’m signing a deal to open Mosaic Steaks next year in [St. Louis’] West County, for example. So it’s a derivative of the brand that people will trust fairly quickly. With the steak restaurant there’ll be 4-ounce steaks, going up to 8-ounce and up to 10. If you want a 16-ounce or a 20-ounce sirloin, you’re going to have to go to some other steakhouse because it would not be true to what we believe is appropriate and what sets us apart.

The branding idea is nothing new. But it works elsewhere, and I think technically, and from a marketing perspective, you piggyback on a great brand. Why not save yourself a lot of money and have instant recognition from it? I want to have 50 units at the maximum. I’ll probably retire before that happens, but if I have 15 or 20, that’s fine too. I want to be intrinsically involved. I like to go into the kitchen with my coat and play with the food and say to my executive chef, “Hey why don’t we do this next time?”

Have you tamed your wanderlust? Do you think you’ll stay in St Louis?

Well, I still have a boat in Sydney Harbour, and I wouldn’t mind sailing about a bit.