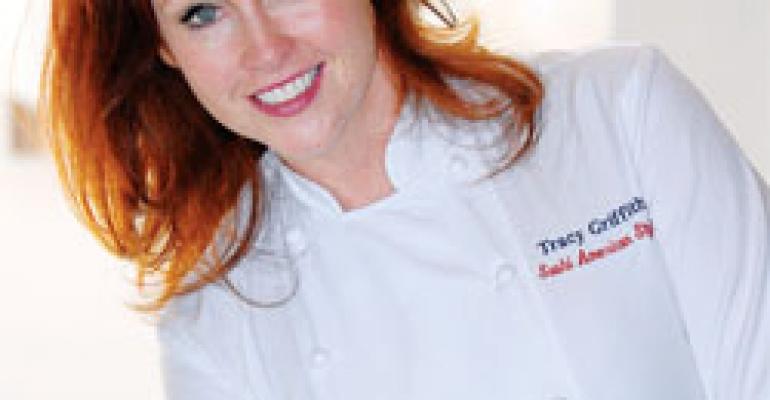 Under the Toque: Griffith fires up traditional sushi with American flavors

With an eclectic résumé that includes an acting career in Hollywood, a country music CD and a published cookbook, chef Tracy Griffith, half-sister of film star Melanie Griffith, feels most at home with a knife roll.

“Cooking was the other thing that I loved,” she says about her choice to attend the California Sushi Academy in Los Angeles. “It’s what I was best at and most comfortable with.”

As one of the relatively few women in a male-dominated profession, Griffith became the first female graduate of this West Coast academy. She later went on to become the featured sushi chef at the now-closed restaurants Tsunami’s in Beverly Hills and Rika’s on Sunset in Hollywood.

In 2004, Griffith published “Sushi American Style,” which serves as a how-to guide for people looking to transform everyday ingredients into sushi rolls.

Griffith currently is working on several restaurant and television ventures across the country, most recently a show on QVC as the chef representative for a seafood company. The show is scheduled to air in mid-November.

What made you decide to go to the California Sushi Academy?

I had an epiphany. I loved cooking since I was small, and [sushi] was a cuisine that I had no idea how to make. I saw the academy opened in Venice, which wasn’t too far from where I lived. I was an actress at the time, and I was looking to start a different career, but wasn’t sure what I was going to do.

Were there any other women there when you were in the program?

Did you start a trend?

I don’t know if I started it, but it was coming. In Tokyo they opened a school in 2003, and it was the first time they had a sushi school at all. They had many women sign up for it, through much grumbling.

Given the call for authenticity, do you feel it’s difficult for an American to get a job in a sushi restaurant?

It was very difficult for me to get a job, even with a certificate and my knife roll under my arm. I think customers expect to see a Japanese man behind the bar and might think they’re not getting the goods if they don’t have that. You have to trust and see. Every chef is different.

But you prevailed and started at Tsunami’s in Los Angeles. What was that experience like?

It wasn’t a Japanese establishment. [The owner,] Mark Fleischman used to run Studio 54 in New York. We made this place a real scene, a sushi bar and a private club. It was happening.

How would you describe American-style sushi?

Sushi American-style is using the Japanese techniques. But the fillings and toppings are more American and familiar. I have a cowboy roll, for instance: grilled steak, double-cream blue cheese, a little red onion and baby arugula, rolled up and stuffed with pink peppercorns. The ingredients are not just raw fish.

What are some of your other signature dishes?

The Pink Panther Roll, with salmon dressed very lightly in lemon oil. It’s sort of like a tartare texture, chopped up with shallots and lemon oil and then rolled up in pink soy paper and topped with fresh red-onion crème and salmon caviar. And then it has a little truffle soy sauce for dipping.

Sushi rice has to be washed, dried and then steamed.

Is there a big market for this style of sushi in the United States?

The most popular rolls in sushi bars in America are the California roll and shrimp tempura, which are cooked. I would offer a spicy tuna roll and people would say, “No, I can’t eat raw fish.” That’s how I started to make these rolls, for people who would come into a sushi bar and hated raw fish.

So is the fish the biggest misconception about sushi?

You hear everything from that it’s “bait” to “I’ll get worms.” They’re not familiar with taste or texture. When you’re young, you develop a palate, and it’s hard for a lot of people to go beyond that. Then they’re scared they’re going to get sick, which is rare by the way.

Can you tell us about your developing screenplay titled “SushiGirl?”

The other thing about being a sushi chef is you’re in front with the customers talking. I would tell these funny stories of trying to find a job, or just the story of my sushi career. So I wrote a script about this actress who becomes a sushi chef in L.A. and all the funny things that happen to her. It was just optioned by a really good producer in Hollywood.

Can we expect any more cookbooks?

I hope so. We’ll see how it goes. I have some ideas.