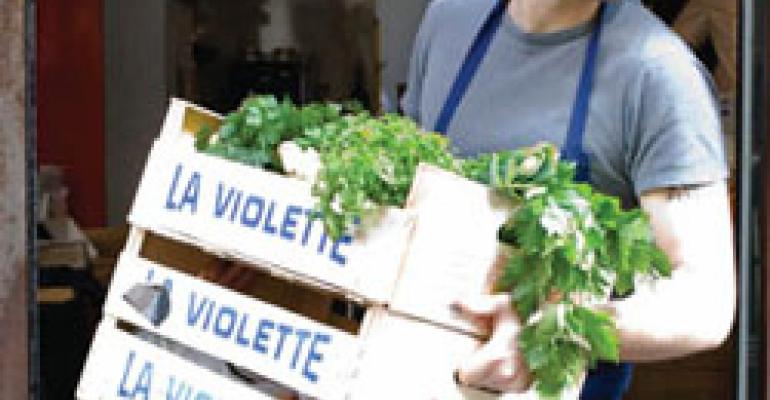 Under the Toque: American chef Rose blossoms at Spring in Paris

It’s possible that Daniel Rose won Le Figaroscope’s “best improbable success” award because perhaps nobody could have imagined a 30-year-old American opening a tiny restaurant in a not-so-chic area of Paris —an extremely simple, 16-seat restaurant with a no-options menu, no less— and becoming an overnight success with critics. Spring, whose name evokes fresh produce, blithe movement and youth, hit the City of Lights like a breath of fresh air. Yet, like the season, its time was always to be fleeting, as he plans to close the restaurant.

Rose also has chronicled his experiences in his blog, .

Why will closing be a highlight of your career?

It was supposed to be a one-year project, but I got caught up in it. There’s still a plan to close. It’ll last another year maybe, another season. It depends who stays. I don’t want to work alone, and I don’t want to keep changing staff. It’s a school. Once the learning stops, it’s time to move on.

Would you stay in the industry?

Depends what comes up, what people ask me to do. Maybe a TV show, maybe become an architect. The restaurant industry is tough. The hours are tough if you want to have a family. I love what I do and I’m serious about it, but I am not a “foodie.” If someone calls me and says they’re a foodie, I usually say, “I’m full.” I don’t think [“foodies”] really have fun in restaurants because they’re so busy comparing it to the last thing. I think nonfoodies who are excited about food love it more.

You worked in Brittany, the South of France, Guatemala and Italy. What did you learn?

In Brittany, I worked with Jean-Luc l’Hourre, who was my mentor. We were only three in the kitchen. He taught me how to like what you do, and about how lonely it is, and how crazy you have to be—and he was—and it was great. He’s a mad genius. He’s among the most highly qualified classic French cooks. There are only 100 Meilleurs Ouvriers and most are retired. In the South, I was chef de partie at the Près du Moulin, under Pasqual Alonso, who had a Michelin star. That was very different. There was a higher turnover and different products as we were in wine country. There I probably learned that you can do quality with a high turnover. It was about the organization and the produce. There’s a myth about the quality of produce in France being greater than in the U.S., but in reality most chefs don’t always go to the market. In Guatemala I was the chef at a hotel with maybe 20 staff working with me. That taught me communication. I speak Spanish, but they spoke an Indian dialect and weren’t professionals in the same way we might think. It was interesting trying to make them really interested in what they were doing. And in the end they made things better than I made them. It was great.

You worked at the Hôtel Meurice in Paris. Tell me about that.

When you work at a three-star restaurant, you’re driven to maintain your stars at all costs. It wasn’t for me. It was boring. The chef, Yanni Galeno, he’s great, but it wasn’t a great atmosphere. It’s doing time so that you can have it on your C.V. You learn a lot, but it’s very aggressive.

My first apprenticeship was partly in the Royal Palace of Belgium. The Michelin-starred chef, Jean-Pierre Bruneau, where I worked was the caterer for the royal family. I also cooked for Omar Bongo, President of Gabon, and the King of Saudi Arabia—with his 40 chauffeurs—at the Hotel Meurice. In Guatemala, I cooked for Eduardo Lagos and his wife, along with the ambassador. They were great fun. Celebrities and royals aren’t necessarily the best customers, but they can be. They’re very busy, so you want them to enjoy themselves, take a break from work. If they tell you it was good, that’s great, but they don’t have to.

How was the year you spent cooking on a coal-burning stove in Brittany?

It’s great. It’s like your clock. By 2 p.m. when the flame starts to cool down, you know it’s the end of service. It imposes a rhythm. It’s extremely efficient and pleasurable.

Why options? I want to cook one thing well, rather than five average things. Plus it’s a question of freshness and cost. The menu’s not expensive. I have to control costs somehow. And I was alone.

You had a Michelin man in your kitchen helping out because you thought he was a fellow hospitality worker?

Taste everything, at the beginning, middle and end. Save a bit of everything served to taste it again. Don’t touch it or reheat it, so you know exactly what the customers experience. Watch them as they eat.

I had no idea. When people come alone I put some books on the table, buy them a newspaper or something. We talked because he was next to the kitchen. He was charming, very professional. They’re not critics. They’re creating a service for their readers. If they think you provide a service that meets the criteria, they put you in. He identified himself a few days after and told me I’d have a surprise in the book, which was the Bib Gourmand. That brought a lot of great clients. It’s not about an award. It’s about what people are looking for. I’m glad that they thought we corresponded to their readers’ needs. I’m one of their readers, so that’s cool. It’s not the last guide in the world, but probably the most professional.

How is being an American chef in Paris?

It gets you a little more attention, but otherwise [it’s] not much [different]. But I am pretty isolated. I don’t have a network of chef friends.

Do you want to go back to the States?

I’ll go wherever the work is. And it depends who you marry and have kids with. I’m not doing everything for my career.

What will you do next?

I don’t know. I’m working on a book. I hired a photographer to come once a week. I’ve put up the money and am just putting it together. I want to make a record of what’s happened. It’s a collection of portraits of clients, food products, handwritten reservation logs. I haven’t worked out how to sell it. I don’t even know what it will look like, but it’s going to be cool.