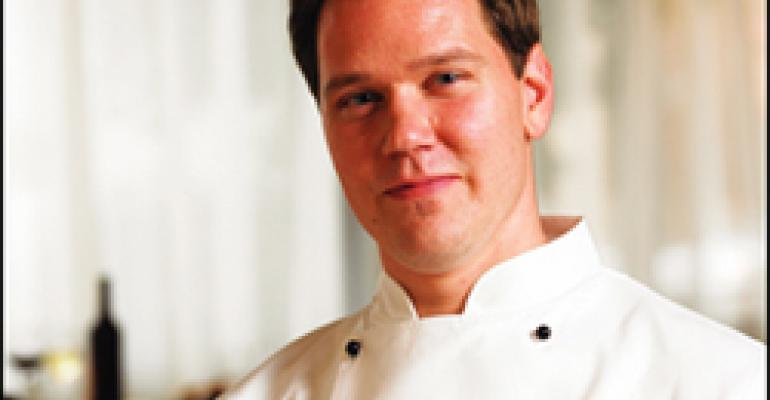 Under the Toque: Alex Cheswick puts his twist on the neighborhood restaurant

Cooking food was on Alex Cheswick’s mind from an early age. He recalls a day as a teenager when, after a high school football game, he couldn’t remember who won or lost because he was in a hurry to go home and make muffins.

He was quick to branch out from the family kitchen, securing his first cooking job at the Metropolitan Club of Chicago when he was 16 and a student at the city’s prestigious St. Ignatius College Prep.

After graduating from The Culinary Institute of America, based in Hyde Park, N.Y., he worked in some of Chicago’s most notable restaurants, including Le Français and Tru, and in upscale restaurants in the Residenz Heinz Winkler and the Hotel Gut Ising, both in Germany.

He likes to think of May Street Market, which he opened in January 2006 in Chicago’s West Town neighborhood, as a restaurant in “a really nice hotel” that’s an integral part of the neighborhood.

May Street Market serves contemporary American fare made with seasonal and regional ingredients from local farmers. Although the food is American, Cheswick likes to give it an upscale twist, as he’s done with such lunch menu items as the beef burger, which includes prosciutto, jalapeño jack cheese and sautéed wild mushrooms. The menu also includes duck and venison burgers.

“People are interested lately in a gourmet twist on American food,” he says.

The lunch menu includes a miniburger trio, a choice of burgers served with pommes frites and truffle aïoli.

Cheswick can get away with tinkering with the ingredients of the old-fashioned hamburger in America, but such tinkering was frowned upon when he was cooking meals in Germany. Tradition prevailed there, and if he strayed from it someone would show him how to cook as others had cooked meals before him.

That did not deter him.

“I would make it my goal to make [the meals] better than they showed me,” he says.

Education: graduate of The Culinary Institute of America with an associate’s degree in culinary studies and a bachelor’s degree in restaurant management

Career highlights: winning a gold medal for healthful cooking at an international competition in Germany as CIA student; working at the three-Michelin-star French restaurant Residenz Heinz Winkler, in Germany; serving as executive chef at Hotel Gut Ising in the Bavarian Alps; opening May Street Market in 2006

It’s really based solely on the products we are purchasing from local purveyors, the beauty of what they’re making and producing. All we do is finish the job in the kitchen. We’re performing a service to their great, bountiful harvest and presenting it to our customers. We use techniques from all over the world, mostly a Middle European aspect for our cuisine.

What was your goal when you decided to open your own restaurant?

My goal was that we would use local produce as much as we can from local farmers. We found that challenging. And I wanted to create a neighborhood restaurant with destination appeal, and not to make the price points intimidating to our neighborhood. Our goal is to have the customer leave happy and healthy.

Is it true you chose the restaurant location because it’s near local markets?

That’s true. A lot has to do with a couple of Italian markets here. Mostly I picked the location because I had fresh mozzarella. And then by off chance we ended up being in an area with a plethora of markets.

What challenges did you face during your first year of operating the restaurant?

To buy from local farmers all year round is a strategic type of operation. Sometimes we order chickens versus vegetables. We are trying to integrate a system where we can have a better relationship with farmers and have them come to us instead of going to them.

What menu items have been most popular with your customers?

One of the biggest selling [items] is the lemon grass and pumpkin soup with black mussels. It’s very healthy. The Maytag blue cheesecake is one of the highest selling items we have. People like Maytag cheese, and because it’s a cheesecake, it’s American. Our roasted venison is a very popular item.

Never overheat the butter when making a beurre blanc.

Having worked in Europe, do you think Americans have different tastes than Europeans?

American tastes are quite interesting in that they like sweet, even sometimes a lot of sweet in their foods. Americans are not afraid to experiment. In Europe, people know their food from long traditions. They know about their food in such a way that if I made it wrong they’d tell me. In Germany, they preferred that I make something they knew from their childhood. There was a group of young people who were breaking with tradition of what they eat, kind of testing the boundaries. In America we’re not testing the boundaries. It’s already been done.

Do you have a favorite dish you like to cook?

I really enjoy cooking venison. It’s a dish I enjoy eating as well. We had a lot of game in Europe where I was. They actually hunted the deer from our area. We had wonderful venison.

How did you land a job at the Metropolitan Club when you were 16?

I got help through my father, who was a member. I was in high school and needed a summer job. I was cheap labor and I wanted to do this. I knew at 9 years old that I wanted to be a chef.

From an owner’s perspective, what do you look for when hiring employees?

I look for clean shoes. If they have dirty shoes and they’re not polished, I don’t even take them to a second interview. I look for a smile. The attitude and their smiles and the way they present themselves, everything else follows from that. We’re all learning and we’re all good people in some ways. I don’t know everything. I do a lot of asking and listening.