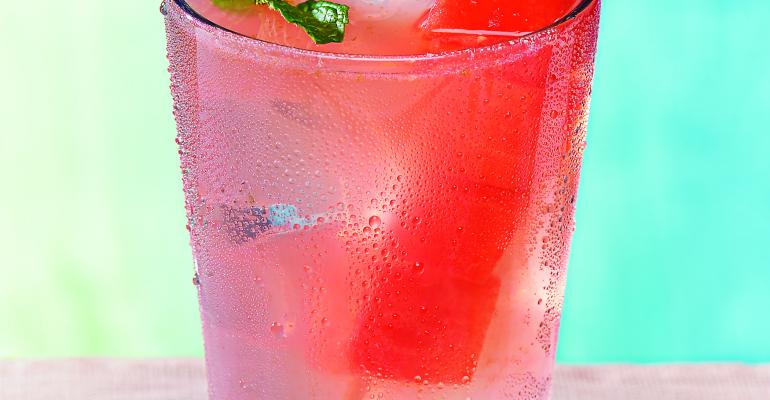 Turning up the juice

“Although soft drinks make up the lion’s share of beverage servings, we are seeing consumption declining,” said Kim McLynn, spokeswoman for The NPD Group, a Port Washington, N.Y.-based market research firm that tracks consumers’ eating and drinking habits. Nonetheless, NPD reports that kids aged 6 to 12 years still order soda at close to half of all away-from-home meal occasions, keeping soda the most-ordered kids’ drink, bar none.

Still, shrinking soda sales are forcing operators to think outside the can and bottle, said Kevin Gingrich, president of Scottsdale, Ariz.-based TacoTime, which has launched a new noncarbonated Limeade Splash line at its nearly 400 quick-service locations. Flavors include Fresh Limeade, Strawberry Mango and Cherry Habanero.

The limeade beverages are a limited-time option available until Aug. 31 in 16-ounce cups for $1.69 to $1.89, depending on the location.

The lemonade is one of several new nonalcoholic drinks, including the Così Sangria, created following the successful introduction last year of a virgin mojito.

Pieces of fresh fruit, which are already on the chain’s prep line for other dishes, float in a fruit juice mixture for the Sangria. The new lemonade includes hunks of watermelon and minced fresh jalapeño, as well as watermelon-habanero syrup.

The peppers add a bit of a “kick” to it, Koziel said. He noted that while neither new beverage is specifically targeted to kids, they are basically juice and fruit.

Spice isn’t a big issue these days when tots commonly order sushi, he said. In fact, Così’s young customers have become more experimental with beverages, Koziel reported. As a result the sangria and spiked lemonade sell with tweens and teens.

“People respond to the fact that it’s not bottled and it’s fresh made,” Koziel added.

The new drinks are prepared to order, Koziel said, noting that these days his guests “want to know there’s a value perception.”

The drinks, which were rolled out to the chain’s 86 company-owned and 57 franchise locations this spring, sell for $1.89 to $2.29, depending on the size. “It’s not something that they are going to get anywhere else,” he said.

The Friendly’s chain uses proprietary syrups to differentiate its drinks, said Eileen Mastrio, senior director of brand marketing for the 500-unit chain, based in Wilbraham, Mass.

A cherry-flavored syrup is used in Friendly’s top-selling Shirley Temple. Close behind in sales is a Cotton Candy beverage that’s sky blue in color and made with lemon-lime soda and a shot of cotton candy-flavored syrup.

“Cotton candy is a huge flavor for kids,” she added. With a cherry garnish, it’s a “fun presentation,” she said. “That’s why kids like it.”

Royal Razz, the third flavor in the line of house-made beverages, sports a deep blue color and raspberry flavor. Each drink is available with children’s meal deals, which include desserts, or may be purchased separately in 24-ounce mugs for $4.29.

The Cotton Candy Shirley Temple at O’Charley’s is a lemon-lime soda-based beverage garnished with wisps of cotton candy. It sells for $2.99 at the Nashville, Tenn.-based chain’s more than 230 stores.

Taco Bell extended its Fruitista Freeze line with a nonalcoholic Frozen Margarita. It comes in 16-ounce and 20-ounce servings that sell for $1.99 and $2.29, respectively, in Norwalk, Calif.

The Majestic restaurant in Alexandria, Va., features seasonally changing kids’ drinks inspired by ingredients found at a nearby farmers market, including Peach-Saffron, Pear-Star Anise and Strawberry-Long Pepper. Service director Melissa Horst, who developed the beverage menu, macerates the fruit with an acid and simple syrup, then adds carbonated water and colorful straws. Some of those come with playful names like Cinderella’s Pumpkin. The drinks sell for $3.

A month after Adam Ogden opened his first Juiceblendz about five years ago, he started offering smaller-sized drinks because he noticed his own daughters couldn’t hold the 24-ounce smoothies he started with. Now the Plantation-Fla.-based chain has had such success with the 16-ounce kids’ smoothies that sell for $3.75, Ogden plans to soon offer a second 8-ounce tyke-size option for about $2.

“Originally, we don’t [didn’t]see the [smaller size] as a huge profit item, but kids often dictate where the parents go,” Ogden said.

“It has really been a success,” he said, noting that the smaller drinks drove the average ticket up from $7.19 to $7.90.

“People are being more health conscious, especially when it comes to kids,” he added. “We use no smoothie mixes or sugar syrups. We use just fresh fruits and juices.”

The Planet Smoothie chain, based in Atlanta, recently reformulated its drinks to have fewer calories. Becky Shell, Planet Smoothie’s vice president of marketing, said it has switched to a sugar-free chocolate syrup and replaced the turbinado sugar used in smoothies with a proprietary stevia-and-agave sweetener.

“We have been able to drastically lower calories,” said Kevin Smith, Planet Smoothie’s director of operations.

For example, a 12-ounce kids’ smoothie that once contained about 250 calories now has about 180 calories.

Planet Smoothie’s drinks are priced around $2.99 for a 12-ounce smoothie and between $4.49 and $6.49 for 22-ounce drinks. Prices vary by market. Planet Smoothie’s 120 locations began posting calorie counts on menus in conjunction with the new formula’s rollout, she noted.

The new recipe, promoted as “Real Ice Cream,” was announced earlier this year as one of several initiatives intended to reverse slumping sales. Sonic’s regular shake ranges in price from $1.99 to $2.49 and comes in regular and large sizes.

“Strengthening our frozen lineup with the addition of Real Ice Cream is just one more way Sonic adapts our menu to appeal to customers’ tastes and preferences,” said Dominic Losacco, Sonic’s vice president of marketing.

McDonald’s chief executive Jim Skinner reported at the recent annual shareholder meeting that the new line of coffee-based Frappes “already are exceeding expectations without much national advertising.” He expects a similar reaction to the introduction of two flavors of McCafé Real Fruit Smoothies that are now in a few markets and are scheduled to be systemwide by July. The smoothies are the first fruit-based drink in McDonald’s “premium” category. They are blended with low-fat yogurt, real fruit and fruit juice.

The flavors are Strawberry Banana and Wild Berry, which features strawberries, blueberries and blackberries. On average these ice-based drinks will sell for $2.29, $2.79 and $3.29 for 12-, 16- and 22-ounce cups, respectively.

The drinks have been in the works for years, and were not created in response to weakening soda sales or anticipated federal menu-labeling laws, a spokeswoman for the Oak Brook, Ill.-based chain said.