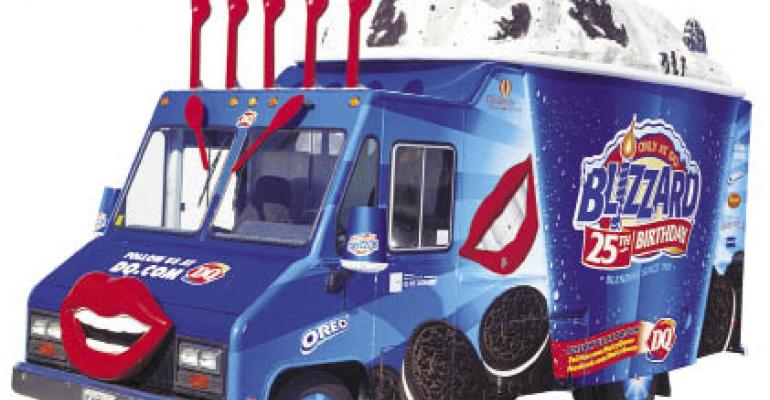 “Oh yes we did” spots do the trick. In a year where the restaurant industry’s hottest ad campaign consists of a pizza chain admitting its old core product tasted like cardboard, it may seem like everything restaurants know about marketing no longer applies. But by advertising its reformulated pizza with transparent, documentary-style commercials like “Pizza Turnaround” and “Pizza Holdouts,” Domino’s endgame was the same as any other restaurant campaign: touting its product as the best.

The gutsy move to change its core pizza and to be honest about why it was necessary paid off for Domino’s. When chief executive Patrick Doyle was asked by Nation’s Restaurant News how much the new pizza accounted for a 14.3-percent same-store sales surge in the first quarter of 2010, he replied, “All of it.”

Domino’s didn’t stop with its executives coming clean on camera, either. Subsequent commercials invited customers to be the chain’s food photographers and took viewers to the farms where the chain sources its ingredients.

A successful operation. Qdoba Mexican Grill seized the opportunity to turn J.D. Power and Associates’ 2010 U.S. Restaurant Satisfaction Study into a creative viral campaign by inventing a virus: Burrito Boredom. When the study revealed that nearly half of all customers order the same thing every time they visit certain restaurants, Qdoba developed a cure for that Burrito Boredom and marketed several treatments.

At the Food Lovers Fighting Burrito Boredom campaign website, users could diagnose themselves and use the Meal Builder application to prescribe a cure, which yielded a coupon for a discounted entrée. More than 500,000 coupons were distributed, and the campaign’s redemption rates averaged between 15 percent and 20 percent most weeks. Users shared their prescriptions more than 10,000 times through social media and e-mail, Qdoba said. Officials said the Meal Builder app would return for future digital campaigns.

Hitting the road. Dairy Queen celebrated several anniversaries in 2010, including the brand’s 70th and the 25th birthday of its iconic frozen treat, the Blizzard. But Dairy Queen made sure to hail its signature item with some fresh product news, and the Mini Blizzard was introduced. The brand rolled out the miniature item with a 25-city cross-country tour in the Blizzardmobile, a special red and blue food truck that doled out samples.

The taste of victory. In a national campaign that chief executive Cheryl Bachelder called “one of our most successful ever,” Popeyes Louisiana Kitchen advertised its victory over KFC in a national, independent taste test by launching “Love That Chicken from Popeyes,” which included TV commercials, digital executions and a public-relations spectacle in New York’s Times Square. The campaign at times was boastful, employing the microsite www.popeyesbeatkfc.com, but officials tried to keep as much emphasis as possible on Popeyes own culinary heritage. Its full-page ad in USA Today, for instance, said Louisiana, “the land of good cooking,” had defeated Kentucky, “the land of fast horses.”

Either way, Popeyes officials were pleased with the results. During its Oct. 3-ended third quarter, Popeyes said the “Love That Chicken” campaign helped drive a 5.3-percent increase in domestic same-store sales, and the campaign’s tagline will remain in future advertising.

Who do we appreciate? Everybody. Satisfying consumers’ overarching demand for value would have been a big enough accomplishment for Denny’s and its $2 $4 $6 $8 Value Menu in 2010. But the family-dining chain managed an even harder feat by offering something to the many niche groups that patronize the restaurant throughout the day, in effect being all things to all people without using a cookie-cutter approach.

For senior citizens — officials said 40 percent of Denny’s business comes from guests 50 and older — a partnership with the AARP gave members a 20-percent discount off the bill from 4 p.m. to 10 p.m., plus $1 coffee all day. The Allnighter menu courted those guests’ grandchildren, who could treat Mom or Dad with social-media offers on Mother’s Day and Valentine’s Day. And for the second straight year, anybody could have a free Grand Slam Breakfast after the Super Bowl.