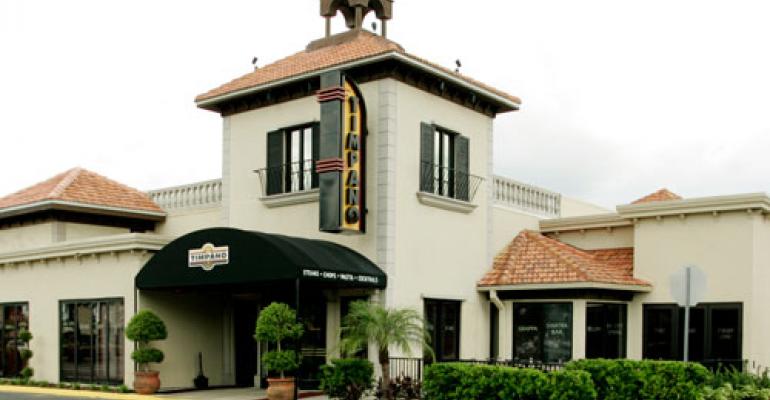 The deal included E-Brands’ concepts and seven restaurants. Among them were four locations of Timpano Italian Chophouse & Martini Bar, an upscale Italian concept known for its dry-aged steaks, as well as three restaurants in The Venetian Casino Hotel & Resort in Las Vegas: the seafood concept AquaKnox, and the Mexican restaurants Taqueria Canonita and its food-court variant Canonita Express.

“Timpano, AquaKnox and Taqueria Canonita are tremendous concepts with highly valued guests,” Bryan Lockwood, president of Tavistock Restaurants, said in a statement. “We look forward to building upon E-Brands’ reputation for exceptional service without interruption.”

E-Brands filed for Chapter 11 reorganization in July 2010. At the time, E-Brands blamed economic pressures, saying its restaurants had been “severely affected by the U.S. macro economy, which has resulted in a transient decline in earnings and cash flow.”

Last year, E-Brands closed its Samba Room location in Fort Lauderdale, Fla., as well as Timpano Tavern, the former David Burke restaurant in Las Vegas that was reconcepted after the celebrity chef broke off his partnership last March.

E-Brands also operated the restaurant Paradiso 37 under a management contract with the Walt Disney World Resort, and Carl said it was not clear whether that contract would continue with Tavistock.

Tavistock Restaurants, a division of the Orlando-based investment firm Tavistock Group, has been growing rapidly through acquisition in recent years. The acquisition of 33-unit Back Bay Restaurant Group in Boston is expected to be completed within days, pending liquor license approvals, officials said. Tavistock bought the rapidly growing Freebirds World Burrito chain in 2007 and the single-unit Sapporo Restaurant in Scottsdale, Ariz.

There are no immediate plans to make any changes, he added.

“Our plans are to continue operating the restaurants as they are, to learn what our guests are looking for and to continue to deliver to meet their expectations going forward,” he said.