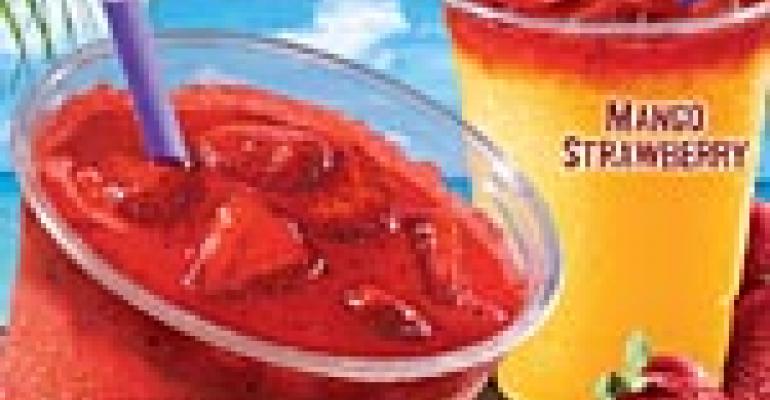 LOS ANGELES Long known for its “outside the bun” thinking when it comes to advertising, Taco Bell won recognition for its creative work last year, outranking all other restaurant brands on the “Top Scoring Television Advertisements for 2009” list, compiled by analytics firm Ace Metrix.

The Irvine, Calif.-based quick-service chain’s most effective commercial, titled “People Sing Piña Colada,” blended a spoof of “Escape (The Piña Colada Song)” with scenes of people turning to Taco Bell’s Frutista Freeze drink for a break from the everyday tribulations of work. As customers suffer through traffic jams, tedious busywork at the office or brain-dead bosses, a voice-over implores them to “take a break-ation” — the combination of a break and a vacation — with the blended drink topped with real fruit.

The winning Taco Bell ad had the highest measure of advertising creative effectiveness, or “Ace Score,” of any commercial from a restaurant brand in 2009, garnering a value of 634 out of a possible 950. The Ace Score accounts for a commercial’s persuasion and “watchability,” Ace Metrix said.

The “Piña Colada” ad, which Taco Bell developed with its agency of record, Draftfcb, debuted in late May. The brand’s latest development is the Drive-Thru Diet Menu, a collection of lower-calorie menu items, which will feature an integrated marketing campaign starring Christine Dougherty, a Taco Bell customer who lost a significant amount of weight over a two-year period by replacing ordinary fast food in her diet with items from the chain’s Fresco menu.

Los Angeles-based Ace Metrix consults with consumer brands by delivering analytics based on its measurements of television advertising effectiveness.