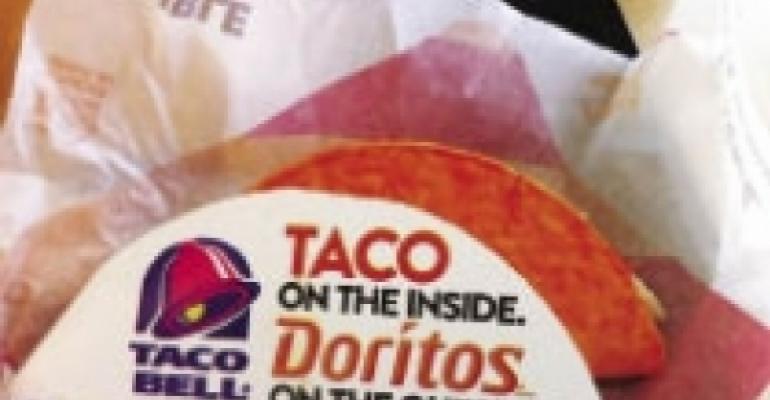 Sporting a shell made of nacho cheese-flavored Doritos, the item is filled with seasoned ground beef, shredded lettuce and Cheddar cheese. The suggested retail price is $1.29, or $1.69 for a Doritos Locos Tacos Supreme with reduced-fat sour cream and diced tomatoes.

The Supreme version is also available as part of a Big Box Meal with a Burrito Supreme, Crunchy Taco and a medium drink. Those counting calories can order the Doritos Locos Taco Fresco Style, with 140 calories, about 30 calories less than the regular version.

Company officials hope the new product, along with other menu upgrades, will turn around sales that sank in 2011 following a lawsuit that questioned the quality of the chain’s seasoned beef. The lawsuit was later dropped, but sales dipped 2 percent for the year.

Taco Bell chief executive Greg Creed said in a statement that the partnership between Frito-Lay, the maker of Doritos chips, and the 5,600-unit Taco Bell offered “a flavor pairing just waiting to happen.”

And more flavors are coming.

Creed said the chain plans to introduce a Cool Ranch Doritos-flavored shell in the fall. Fans have already begun requesting other flavors, he added.

“With the wide range of Doritos flavors available, the possibilities for this product platform are endless,” said Creed.

Watch new commercials for the Doritos Locos Taco; story continues on the next page

The new product was tested for a year in units in Bakersfield and Fresno, Calif., and Toledo, Ohio. While in test marketing, the Doritos Locos Tacos accounted for one of every three tacos sold, and 70 percent of those Doritos Locos sales were incremental, benefiting transactions and the average check, Creed said.

“Transactions were more positive than average check,” Creed told Nation's Restaurant News Thursday. “We found that existing customers were coming in more often, and those people who were light or medium users were coming back to Taco Bell again.”

The launch will be accompanied by a large-scale marketing effort that includes traditional media — television, radio, print, outdoor and online — as well as digital, social media and public relations efforts.

In February, Taco Bell debuted a new “Live Más” marketing campaign, which officials said reflects a move by consumers from “food as fuel to food as experience.”

Music, which has long been part of Taco Bell’s marketing efforts, will also play a role in the product launch. The Doritos Locos Taco will be integrated into a music conference scheduled in Austin from March 13–17. In partnership with Hype Machine, Taco Bell will host a Feed the Beat concert series at the Hype Hotel, where attendees can sample the new taco.

Fans can also watch exclusive video of the performances via a QR code that will be printed on the taco’s containers in restaurants, with a new performance featured each week.

In addition, from March 12–May 6, tweets featuring the hashtag #DoritosLocosTacos will be shown on digital billboards in New York City’s Times Square and on Sunset Boulevard in Los Angeles. Once a tweet appears on a billboard, a snapshot will be sent to the creator for download and sharing, as well as posted on www.doritoslocostacos.com.

The systemwide rollout of the Doritos Locos Tacos also should help, not complicate, the testing of other major initiatives for Taco Bell, like the First Meal breakfast platform or the test of the premium Cantina Bell menu, Creed said.

“We expect Doritos Locos to enhance test markets for Cantina Bell, because people will come in for the new product and they’ll see we’re selling this amazing range of new products inspired by Lorena Garcia,” he said. “In test markets, our speed of service actually increased by 12 seconds per transaction, because we were doing slightly less grilling and slightly less steaming, but we could handle the incremental transactions, which was another big win.”

Mark Brandau contributed to this story.