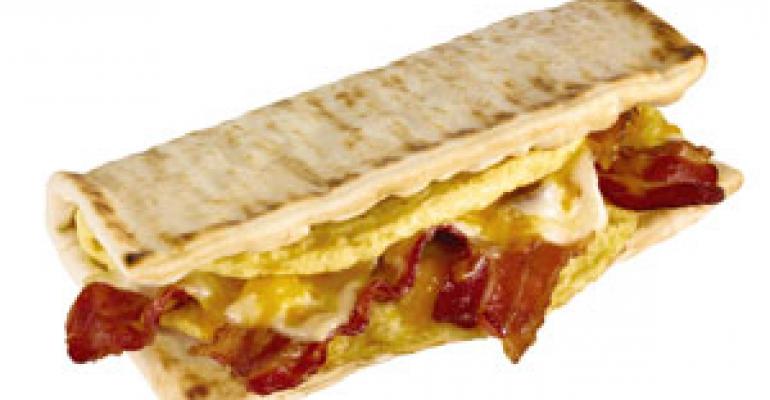 After serving breakfast for four months, Subway said the daypart has increased sales systemwide and exceeded expectations, leading the sandwich chain to expand the early-morning menu with limited-time offers and explore the service of more coffee or espresso-based beverages.

In an interview with Nation’s Restaurant News, Larry Varvella, Subway’s research and development project leader, said the chain’s foray into breakfast — a daypart filled with heavyweights McDonald’s and Dunkin’ Donuts — was a success for the brand and its franchisees.

“We’re very excited that our initial results show it is outperforming even our original expectations,” Varvella said. “Those original expectations were based on our franchise owners breaking even at the least. Of course we fully realized that to be a major player [at breakfast] we needed a long-term commitment. We figured that would be a three-to-six-month period. The last thing we wanted was for our owners not to be profitable.”

The Milford, Conn.-based quick-serve sandwich chain introduced its breakfast program April 5 to more than 25,000 Subway restaurants across North America. The menu features egg and cheese sandwiches served on whole-wheat English muffins, flatbreads or Subway’s traditional 6-inch and foot-long hoagie breads at a prices ranging between $1.75 and $2.25 for the English muffin melts, $2 to $3.50 for the 6-inch hoagies or flatbread sandwiches, and $4 to $6 for the foot-long variety.

The chain entered breakfast as more research highlighted the daypart’s growth potential and popularity with consumers. According to a study conducted by market research firm Mintel Research earlier this year, the breakfast foodservice market is expected to grow 13 percent through 2014. In addition, two of the fastest-growing menu items at quick-serve restaurant chains are specialty coffees and breakfast sandwiches, according to NPD Group, a marketing research firm based in Chicago.

More sandwiches are on the way, Varvella said, although he would not disclose what was in test or when new items would debut.

“We are definitely looking at introducing new items through limited time offers,” he said. “We fully believe that new products are one of the life-bloods of a restaurant chain. We want to keep [the program] new and exciting, and have a lot of items in the pipeline.”

He added that Subway also is exploring the possibility of expanding its beverage line to include espresso-based and flavored coffee drinks.

“Coffee has been a very strong part of our program,” Varvella said. “We’re looking at expanding with Seattle’s Best above and beyond standard drip coffee.”

Though Varvella would not disclose sales for the breakfast program, he indicated there are several barometers that have determined its success, including the acceptance by Subway franchisees.

“The franchisees are happy and the customers are buying the product,” he said. “In the past the menu mix was higher in non-breakfast items, but now we’re seeing equal amounts [in sales] of about 50 percent breakfast and non-breakfast, which, again, is ahead of projections.”

Varvella noted that the two best-selling breakfast items include the egg white western melt and the double bacon and cheese omelet. Latest promotions have highlighted the steak, egg and cheese sandwiches.

Alan Warmund, president of Subway Development of Washington, the McLean, Va.-based area developer of 1,100 franchised units in the mid-Atlantic region, said many franchisees are upbeat about the breakfast program’s success.

“It is doing much better than expected from ground zero,” Warmund said. “The results have been extremely encouraging; overall in our territory, the owners are happy and sales are growing.”

Warmund agreed with Varella’s assessment of a 50-50 split between breakfast and non-breakfast item sales, mainly because the chain’s full menu is now available from 7 a.m. onward, depending on location.

“We’re selling a lot of standard items along with breakfast items,” he said. “We’re really offering a full menu from 7 a.m. on. Why wait in line at lunch if you’re already there in the morning? I think it’s great. We don’t care what we sell; we just know we’re selling more.”

Warmund expressed skepticism over the possibility of Subway growing its coffee program, however. He said the equipment would be too expensive to implement systemwide. He noted that the needed equipment could cost between $10,000 and $15,000.