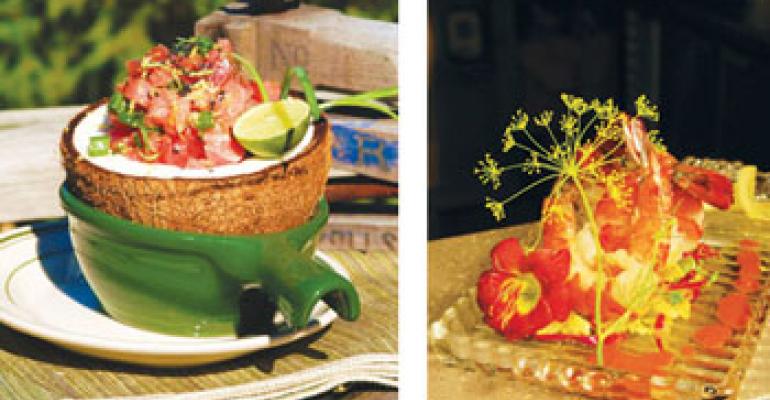 Tropical foods can brighten a menu with color and flavor, but they can also fit in with a sustainable ethos. Even though flavors like island curries, exotic fruit drinks and hot peppers come from faraway islands, chefs can use those concepts with local ingredients.

That is what Daniel Orr did this March at FARMbloomington, his restaurant in Bloomington, Ind. The farm-to-table-focused spot dedicated its menu to Caribbean dishes March 14-22.

Orr is focused on sustainable, local ingredients, and he sticks to that philosophy with dishes for special events like the Caribbean week. That included the popular Caribbean curried goat with pigeon peas and coconut rice, which sold for $19.

“I try to use as many local ingredients as possible,” he says. “We have a farmer by the Ohio River that brings us beef and pork, and she has a neighbor that raises goats.”

Orr takes the goat, cuts it up and rubs the pieces with jerk seasoning. He lets the meat sit overnight, then stews it slowly to cook the meat and create a broth base for the curry.

“We make the curry out of the broth that results from the stewing of the goat,” he says. “It has all those nice flavors, the allspice, Scotch bonnet peppers, bay leaves, lemon grass. We finish it with coconut milk, but it is not a real bright yellow curry, it is more of an island curry.”

The Scotch bonnets that give Orr’s island curry its bite are not very hard to come by at his local farmers market, where he has a regular and vivacious supplier.

“We call her the chile woman,” he says. “She wears chile pants and a chile apron and she is down there at the farmers market every Saturday. Through September, we have got a good supply of chiles.”

Indiana University also is in Bloomington, and many of the students and professors go off to tropical locales for spring break. Orr, who spent two years working in kitchens in Anguilla in the British West Indies, aimed to capture the segment that stayed in town.

“A lot of the town leaves, and what I wanted to do was create something where the people could have spring break without leaving Bloomington,” he says. “We have done this for two years in a row. People are always looking forward to it and wondering when that goat curry is going to come back.”

In addition to the Caribbean-theme spring break week in March, he peppers his menu throughout the year with tropical dishes, such as jumbo prawns with mango-chile sauce and Caribbean slaw, and tuna ceviche flavored with coconut water and white balsamic vinegar, which is served in a hollowed-out coconut.

For Russell Skall, corporate chef at Fleming’s Prime Steakhouse and Wine Bar, the special prix-fixe tropical menu that ran this spring worked not only as a platform to introduce new flavors to customers, but also as a way to test items that might end up in the regular rotation.

“Being a traditional-type steakhouse,” he says, “this is an avenue where we can get creative and kind of showcase some different theme type foods to see if they can be a hit and go on our menu.”

The special menu, which began March 20 and runs through June 20, has three entrée choices: a jerk-seasoned hanger steak with parsley-garlic sauce and red-onion salsa, roast chicken marinated in ginger and coconut milk, and a broiled salmon steak marinated with citrus, pepper and garlic. It is priced at $35.95 per person, and includes a choice of soup or salad and a pineapple tart with vanilla ice cream and caramel sauce for dessert.

Skall was excited to include the hanger steak, since it represented a chance to highlight something besides filet, which he usually uses for the steak choice on fixed-price menus.

“This is fun for us, educating the guest on the different kinds of cuts out there,” he says. “Filet is probably 50 percent of what we sell on our regular menu. When we do a filet on the prix-fixe, with three entrées, that is usually the biggest seller.”

Brothers Mark and Scott Monette operate the Flagstaff House Restaurant in Boulder, Colo., a fine-dining spot owned by their family since 1971. They opened Monette’s Bar M Café in late March at the Mauna Kea Beach Hotel in Hawaii and celebrated the opening with a $58 prix-fixe Hawaiian-influenced menu at Flagstaff that was available through March and April.

The inspiration for the menu came about last year, after the Monettes made several trips to Hawaii to research and prepare for the new restaurant’s opening.

“The more we went out there, the more I saw how compatible it would be for us,” Mark Monette says. “We are into the farm-to-table movement. When I see all the local stuff we have here and the local stuff in Hawaii, that I can fly in by FedEx within a day, the freshness of the products, I said, ‘Oh my God, this would be awesome.’”

“They are double the price of vanilla beans anywhere else, but the quality is unsurpassed,” he says. “Vanilla beans are usually $100 per pound, and these are $200 per pound. The flavor is incredible. It is just a different type of vanilla.”

Monette also served opakapaka, a Hawaiian snapper, with coconut sticky rice, sautéed bananas, roasted red peppers and thin green beans, while adding a subtle palm plant flavor in the cooking process, using the husks from trees on the island of Kona that produce hearts of palm.

“What they normally do with the husk is grind it up and shove it back in the fields,” he says. “We take the husk, roast it in the oven, then I will bake the opakapaka on the plank in the oven.”— [email protected]