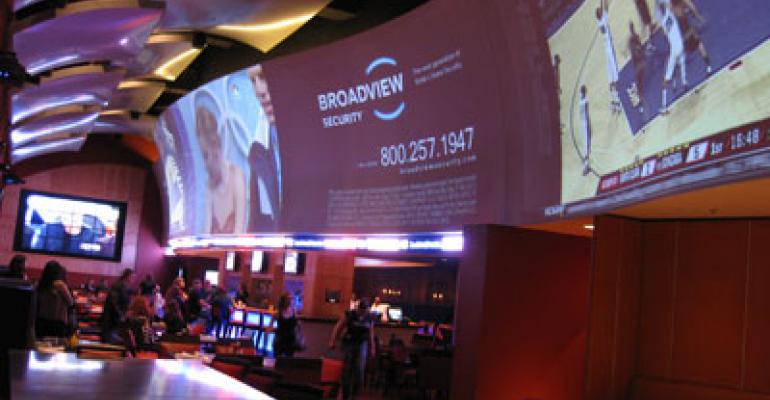 A new breed of sports bar is emerging with high-end eats and polished settings, from Emeril Lagasse’s Stadium in Las Vegas to the new Brackets in Dallas.

TVs also are being elevated in these higher-end sports bars, with wall-sized screens at High Velocity in the JW Marriott San Antonio Hill Country Resort and Spa and the 30-foot screens at the posh National Pastime Sports Bar and Grill in the Gaylord National Hotel and Convention Center in National Harbor, Md.

“Brackets is the missing link that ties a sports bar with a restaurant,” she said. “What we are trying to do is to fuse the two together. Even though we are a sports bar, we can have great food.”

The menu, while showcasing burgers and wings like at any blue-collar sports bar, also features items like lobster ravioli in a white wine-sage cream sauce for $25 and a 16-ounce, ancho-chili-rubbed Cowboy Ribeye with garlic mashed potatoes, green beans and tobacco onions for $26.

Even the wings at Brackets get a gourmet spin, offered in traditional buffalo as well as “savory lemoncello and pepper.”

At High Velocity in the year-old JW Marriott San Antonio Hill Country Resort and Spa, sports-themed paintings and team logos are overshadowed by a 120-foot-long, 12-foot-high undulating TV wall above the bar. The bar has become a popular San Antonio destination for game-watching and entertaining with a Texas-inspired menu and two dozen beers on tap.

High Velocity’s menu features such non-traditional sports-bar fare as chicken Parmesan with house-made marinara over penne with provolone for $15 and a pan-seared teriyaki salmon fillet with citrus-soy dressed Asian greens for $18.

Early on with the upscale sports bar trend was celebrity chef Emeril Lagasse, who opened Lagasse’s Stadium at The Palazzo Resort-Hotel-Casino in Las Vegas in September 2009.

The 24,000-square-foot sports bar and entertainment venue features billiards on the Las Vegas Strip patio and stadium-style seating in plush couches facing a 9-by-16-foot video wall. It also has more than 100 high-definition televisions and an extensive sports-book betting area.

“I wanted this place to be fun,” Lagasse said at the opening. “It’s not stuffy.”