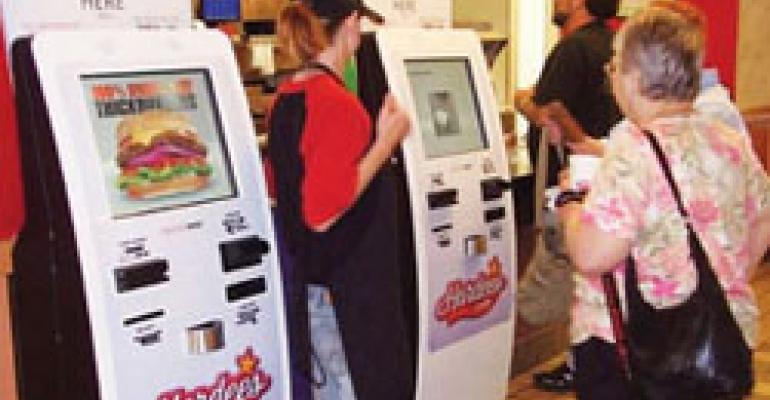 Speed up service with touch screens

The following story is part of this week's special NRN 50 issue, Opportunities knocking: Open the door to bold thinking and unlock your profit potential. Non-subscribers and those who wish to purchase this single issue in its entirety can click here.

Time is money, so the adage goes. That’s especially true when a slow-moving line at the service counter of a quick-service restaurant exacts a toll in customer walk-offs and lost sales.

But some operators say they are successfully busting lines and boosting throughput—and increasing average checks to boot—by inviting patrons to use self-service kiosks in the dining room to order their meals.

The typical kiosk in a quick-service dining room is a computer-based device networked to the store’s point-of-sale, or POS, system. Customers press a touch screen interface to navigate through screens that depict various menu choices. They pay by swiping a credit card into the machine or, in some cases, by inserting cash. The kiosk sends the order to the kitchen and gives the customer a numbered receipt to claim the order at the counter.

Observers say acceptance and use of self-service kiosks are soaring in sectors like banking, transportation and retailing but are not yet widespread in foodservice.

“The trend we see over the years is that consumers are embracing this kind of technology more,” says Lee Holman, lead analyst for IHL Group, a Franklin, Tenn.-based research firm.

In mid-2008, IHL said transactions at self-service kiosks would surpass $607 billion in North America that year and more than triple to $1.7 trillion by 2012.

Several operators who use kiosks agreed the machines not only bust lines but also sell add-on menu items more effectively than human order-takers.

The kiosks that Jack in the Box has in about 30 of its 2,100-plus stores “allow us to get more throughput in a rush because we have more ordering points,” says Michael Verdesca, the chain’s vice president of systems development.

Yet some operators say the speed of self-service is something of an illusion.

“Kiosks generally are not faster than an order-taker,” says Jonpaul Leskie, chief executive of Geneva Enterprises of Bonifay, Fla., a seven-unit Hardee’s franchisee. “But customers are under the impression they are faster because they are busy inputting their orders.”

Self-serve kiosks are also known for building the average check by consistently suggesting the purchase of additional side dishes, soft drinks and desserts, something that customers apparently do not mind, operators say.

Thus, at the two Geneva Enterprises’ Hardee’s stores that have kiosks, the average kiosk order is 15 percent to 20 percent higher than the average counter order, says Leskie, who says it amounts to close to $300 of additional revenue per day.

At TD Banknorth Garden Arena in Boston, owned and operated by contract foodservice concern Delaware North Cos. of Buffalo, N.Y., kiosks help manage the crush of humanity that descends on concession stands during breaks in professional sports games. This season, revenues from kiosks in general concession areas are 10 percent to 12 percent higher and in the premium club grill 18 percent to 20 percent higher than those from the counters, says general manager Mike Zielinksi.

“Kiosks will become much more than just order-entry points,” Leskie says. “They’ll have features like games, Internet access and multimedia. Operators will also use them for things like training and advertising.”