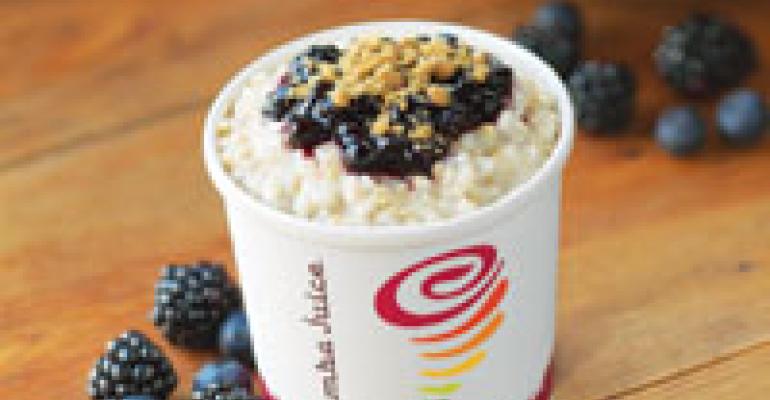 With the recession in full swing, cheap, convenient food can be a marketplace winner, so operators are responding with oatmeal. Chains like Starbucks and Jamba Juice offer the breakfast staple, as do local, organic-oriented independents.

Emeryville, Calif.-based Jamba Juice came out with a steel-cut, organic oatmeal this winter, and the chain plans to keep the dish on its menu year-round. In fact, vice president of the brand marketing Kim Larson says the traditionally cold-weather meal is selling very well in the chain’s Hawaii store. It is priced between $2.95 and $3.25, depending on the location.

“As we have seen the weather get warmer, we have been surprised at how well the sales have held,” Larson says. “We feel that, contrary to popular belief, this will be a 12-month product for us.”

Jamba tested the oatmeal in stores in the San Francisco Bay Area in the fall and got good customer feedback, but Larson says they took it back to the lab for tweaking. After a larger market test in Chicago, the product launched in January.

“The overall response has been fantastic,” Larson says. “I think we have exceeded our sales expectations. From a customer perspective, we have hit on a real need.”

Larson says the convenience factor is a plus for customers. Steel-cut oatmeal takes longer to cook than instant oatmeal, so one of the initial tasks for the first employee in the door at a Jamba unit is to begin cooking a batch of oatmeal.

“It is one of those products that you have to plan to make it,” Larson says. “We heard that a lot from customers. This would be hard for them to take that much time to cook it at home.”

Jamba offers the oatmeal plain, or with one of three toppings: blueberry and blackberry, apple and cinnamon, and fresh banana. The berry and apple additions are the best-selling options, Larson says.

“They are both more popular than the plain fresh banana, although as the weather gets warmer we are seeing [banana] trend upwards a little bit,” she says.

United Kingdom-based Pret a Manger offers a hot-oatmeal product that its website says is “all-natural rolled oats, with steamed milk, raisins, toasted walnuts, cashews, hazelnuts and multigrain granola.” The bakery-sandwich chain, which has about 150 stores worldwide, sells its oatmeal for $3.25 in New York.

Starbucks has its “Perfect Oatmeal,” an instant product that the chain serves on request from guests. A packet of oatmeal is mixed with hot water, then it can be topped with dried fruit, a nut medley or brown sugar. Last month the Seattle-based coffee chain introduced $3.95 breakfast deals that pair a tall latte or coffee with breakfast food offerings, including oatmeal.

Tom Meyer, executive vice president at Clyde’s Restaurant Group, based in Washington, D.C., used to be the eight-unit company’s corporate chef. He says they have had oatmeal pancakes on the menu since the mid-1990s, when he came up with a healthy breakfast recipe for his children.

“I started making them because when my kids were young, I wanted to make them pancakes, but I wanted them to be a little bit healthy, more than just a white-flour sugar bomb,” Meyer says.

The process is similar to making traditional pancakes. Meyer mixes wheat germ, whole-wheat flour, cooked brown rice and raw oatmeal together, then mixes eggs and buttermilk separately. Then he combines all the ingredients. Meyer says the oatmeal tends to absorb a lot of liquid, so if the batter clumps up, he thins it out with a little more buttermilk.

The oatmeal pancakes have proven to be popular with Clyde’s patrons. The dish sells for $9.95.

“It is a very popular dish,” Meyer says. “We have it on the brunch menu all the time.

The Blue Rooster in Cranbury, N.J., serves three different types of oat-based breakfast dishes. The cranberry-almond blend and a multi-grain version called “Vermont morning,” are both made to order. The restaurant’s porridge is made with milk and steel-cut oats and slow-cooked ahead of time. Porridge can be used to describe any grain that is slow-cooked, typically with milk.

Owners Karen and Bob Finigan lived in Ireland for six and a half years, where they say it is important to know where and how your food was grown. So they use organic oats for the oatmeal and local honey as a topping.

“The biggest thing is to be able to find the field where it was grown in,” Karen Finigan says. In the United States, “I think they are just waking up to it. When you can look at something with a little more rigor, why wouldn’t you do that?”