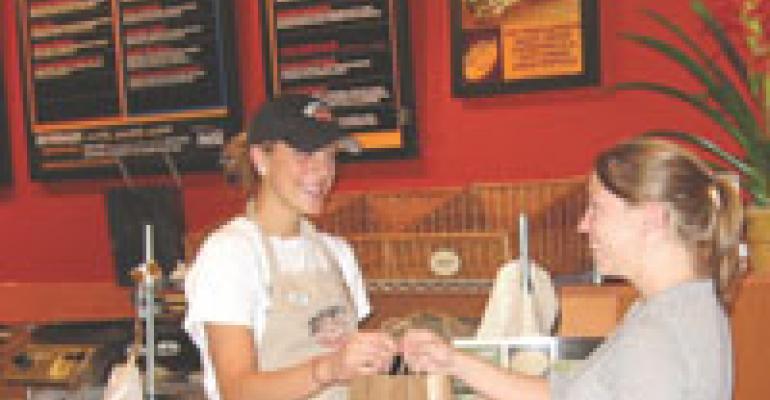 Soup tends to be a hot-selling item this time of year, but operators of soup-focused restaurants are expanding other parts of their menus to avoid being left out in the cold as the category loses some of its steam.

Even concepts that have the word “soup” in their names, such as Souper Salad, Souplantation, Zoup! Fresh Soup Company and San Francisco Soup Company, are expanding their nonsoup specialties in the face of an overall downturn in away-from-home soup consumption.

That consumers can’t live on soup alone is apparent in the 6-percent drop in restaurant soup consumption last year, compared with 2006 volumes, according to the research firm NPD Group/CREST, whose findings also ranked the importance of soup on menus at a low 2.4 percent.

Those metrics won’t be greeted warmly by operators who just a few years ago had seen gourmet-oriented soup concepts as contenders for next-big-trend status.

Nonetheless, as fast-casual soup operations broaden their offerings of salads, sandwiches, desserts, and other lunch and dinner items to avoid being locked into too limited a niche, the leading bakery-cafe chains they are beginning to resemble, such as Panera Bread, Au Bon Pain and Corner Bakery Cafe, are adding more soups to their menus.

Darren Tristano of the Chicago-based industry consulting firm Technomic Inc. said soup-focused concepts “have added other things, like sandwiches and salads, because soup is too narrow.” Exceptions are some small chains and independents in climates with very cold winters, he said.

Foodservice consultant Jerry McVety of McVety & Associates of Farmington Hills, Mich. said that although soup chains such as Zoup! appeal to a large market and are relatively simple and inexpensive to operate, they may make the most sense in locations like food courts or airports. Otherwise, they need to support their soup offerings with additional menu items in order to compete with the likes of Subway, Così, Mr. Pita and scores of other concepts that serve soup.

The growing number of self-service soup bars featuring upscale take-home varieties in supermarkets’ service-deli areas also pose unwanted competition for the likes of Original SoupMan, a 40-unit chain based in New York that was beset last year by reports of unhappy franchisees and store closures. The chain, which began franchising in 2004, was said to have been hampered in its quest for repeat patronage by the $7-$12 price range of its 12-ounce specialties.

“While soup is our point of differentiation, at the end of the day our focus is to deliver not just really good soup but sandwiches and salads and do it all efficiently,” said Eric Ersher, Zoup’s president.

Zoup, which encourages repeat business through daily e-mail promotions and online ordering, is stepping up its franchising efforts, and reports having five new franchise agreements in development.

“Our franchise base continues to grow at a controlled pace,” Ersher said.

Unlike two older soup-focused chains, Zoup does not offer a signature salad buffet. Souplantation, founded in 1984 and owned by San Diego-based Garden Fresh Restaurant Corp., and Souper Salad of San Antonio, founded in 1978, have extensive salad bars and offer soup as significant parts of their all-you-can-eat buffets.

“Soup is our mainstay,” said Joan Scharff, executive director of brand and menu strategy for Souplantation, which also operates the same concept under the name Sweet Tomatoes outside of California. The number of soups offered daily by the chains’ 105 restaurants has increased to eight from the six formerly served; choices rotate every two weeks.

Sales are consistent year-round and rank right behind bakery items, Scharff said, noting that all soups are made from scratch daily in a central kitchen and delivered to the restaurants.

Garden Fresh plans to add between six and eight more branches of its two chains by the end of 2008. Per-person checks average between $7 and $10, depending on the market.

Souper Salad, which owns and operates 84 units, ranks as the second-largest soup specialist, although it hedged its bets from the start by giving equal billing to salads, which sell better when the weather is warm, said the chain’s marketing chief, Neil Naroff. Eight new restaurants, all franchised, are planned this year as the company begins a franchising program.

Initial plans are to fill in existing markets in the 12-state Souper Salad system. Sandwiches, now being tested in the San Antonio market, would add another category to a menu that already encompasses five soups daily as well as pizza, bread, desserts, and do-it-yourself salads, pastas, fajitas and other Mexican specialties.

While broadening its menu, Souper Salad stays within a segment that Naroff terms “healthy” but does not overtly promote that way. The menu became completely trans-fat-free at the start of 2007, and no fried foods are served, Naroff said. Smoothies and flavored lemonade were added in recent summers and have become permanent menu additions.

“We still make soup the old-fashioned way,” Naroff said, adding that all the from-scratch cooking is done daily in each restaurant without the benefit of a commissary or other pre-preparation methods.

Souper Salad’s second concept, the Dallas-based chicken specialty chain Grandy’s, which was acquired a year ago, has a different customer base, Naroff said. Dominated by males, the Grandy’s clientele complements Souper Salad’s brand offerings, he said.

“We’re looking into other parts of the West Coast, but there’s nothing specific yet,” he said.

Existing units are mostly in the city’s financial district and malls.

“The fun thing about soup is you can be so creative; you can take it on and off quickly and have a lot of menu flexibility,” Sarver said.

His chain typically offers about 12 varieties daily, with as many organic ingredients as possible and some cold soups in the summer.

Checks at Souper Salad average $6.50, which Naroff describes as “an amazing value.”

“In the face of what’s going on in the restaurant industry and the economy, our business is holding up pretty well,” he says.

Soups are a natural fit on bakery-cafe menus, making use of bread for croutons and even as bowl-like containers.

“Most of the bakery-cafes have five to seven soups and up-sell them into bread bowls so they can almost double the price,” said Technomic’s Tristano.

“Soups play a huge role,” he said, adding that seven of every eight sandwich-combo orders in the winter are for soup rather than salad. Soups sell à la carte for $2.99 for a cup and $3.99 for a bowl.

Panera Bread prepares soups in commissaries, freezes them and delivers them to its 1,172 outlets, a spokesman said. Five or six flavors are available each day, both à la carte or in combos.