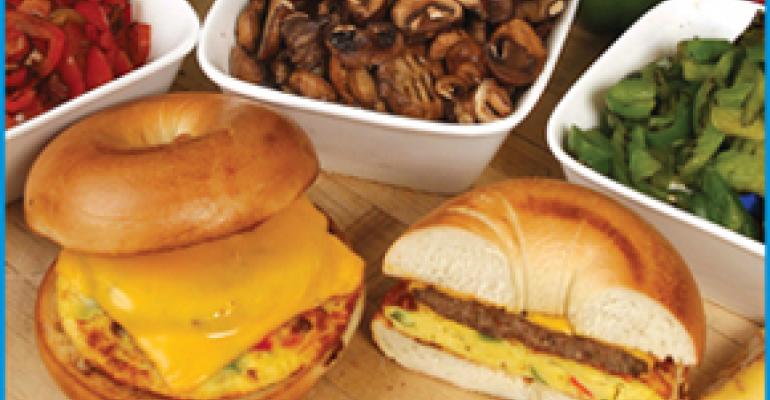 Joe Scafido believes Dunkin’ Donuts’ breakfast business will continue to grow. “Right now lunch is still very dominant in QSR, but breakfast is closing fast,” says the chief creative and innovation officer for Dunkin’ Brands. “I think we’re only in the first stage of the rocket that is breakfast as a category.”

Scafido leads the team that created Dunkin’ Donuts’ current shining star in the breakfast sandwich category: the Sausage Supreme Omelet. Introduced last September, the new menu item is an extension of the Supreme Omelet breakfast sandwich, introduced earlier in 2006. The goal of the rollout, Scafido says, is to provide “great, high-quality breakfast offerings to consumers that really give them a taste and the comfort of normal weekend fare.”

“Our core competency is the a.m., and part of that a.m. is our breakfast sandwich line,” says Jon Luther, chairman and chief executive of Dunkin’ Brands. “So when we introduced the Sausage Supreme Omelet, it just enhanced that breakfast line and fortified our credentials for the breakfast daypart.

“We just moved into No. 2 as breakfast sandwich provider in QSR in America,” Luther says, “and the Sausage Supreme Omelet helped us jump that category last year by 12 percent. So it’s a huge, huge, winner for us.”

Before joining Dunkin’ Donuts in 2003, Scafido served as chief menu and marketing officer for Popeyes Chicken and Biscuits. At Popeyes, Scafido and Billy Jacob, the chicken chain’s executive chef and director of culinary development, were part of the team that earned a MenuMasters Award in 2002.

Scafido and his team conducted extensive in-house recipe development and consumer testing before signing off on the definitive Supreme Omelet. The final blueprint called for an egg mixture spiked with scallions, hash brown potatoes, Monterey Jack cheese, Swiss cheese, fire-roasted mushrooms and diced red and green peppers, served on the customer’s choice of a bagel, croissant or English muffin.

“When we took that into consumer taste test, it was one of the highest-scoring products we’ve ever seen at Dunkin’ Donuts, so we knew we were on the right track,” Scafido says. “Once we get to the point that we feel we have the right product, we will then begin to commercialize it. That means we want to find out that we actually can produce a very high-quality product somewhere in a manufacturing facility and create millions of them so that we have consistency.”

In the commercialization process, the Supreme Omelet ran into a little snag, Scafido recalls.

“With the addition of the pepper blend, what we actually got was what I refer to as ‘pink’ egg; it created a kind of red tint in the egg,” he says. “So working with our food technologist and the manufacturer, we were able to figure out how to stabilize the color in the peppers and not let it bleed into the egg. That was one of those moments where you go: ‘Oh no. We’ve gotten this far, and now we’ve got a challenge on our hands.’ But we were able to overcome it.”

After the commercialization phase is done, consumers rate the product again to ensure it scores as high as the original chefs’ product. Then, a successful product proceeds to on-site testing, in one or two stores to determine if the sandwich can be delivered in less than 120 seconds. Following that, it is rolled out to a larger selection of test stores and then to a market test with media support.

At this point, Scafido explains, the product has to hit three hurdles: units or dollar sales; operational considerations, such as speed of service; and consumer acceptance. If all goes well, the product proceeds to a full rollout.

The omelets, which are formed in disks that have the same circumference as a Dunkin’ Donuts’ bagel, are shipped frozen to locations, where operators thaw the omelets and refrigerate them until they are needed. Upon receiving an order, the operator toasts the “bread carrier,” microwaves the omelet and the sausage, and builds the sandwich: carrier, slice of American cheese, omelet, sausage and carrier top.

The Sausage Supreme Omelet and Supreme Omelet required no new equipment in the stores, creating what Scafido calls a “win-win” situation for franchisees. “When you can deliver such a powerful and successful new product without any additional investment,” he says, “that is what really makes franchisees smile.”