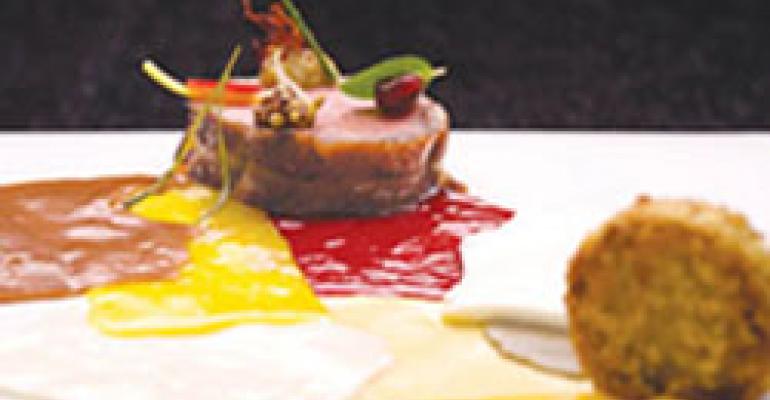 It’s probably just the culinary world going: ‘What haven’t we done yet?’”

That’s how Grant Achatz, the edgy, award-winning chef of Alinea restaurant in Chicago, sums up the recent popularity of rillettes and other house-made charcuterie.

“It’s just like anything else,” he says. “You go through trends with ethnic food: Japanese is hot, then Mexican, then Thai.”

Now the age-old techniques of French charcuterie are getting their turn. As a result, tubs of shredded pork and lard are basking in the limelight.

Of course, pâté, terrines and rillettes never disappeared from the menus of French-style bistros like Bistro d’Oc in Washington, D.C., or Buena Vista Bistro in Miami. However, rillettes, in particular, have expanded beyond the domain of French restaurants, and some chefs have added their own twists to the classic item.

Take, for example, Achatz’s approach. He begins by trimming the belly section of a lamb saddle and cooking the trimmings in lamb fat, butter and canola oil. That mixture is then shredded, seasoned with shallots and Moroccan spices, and combined with more butter.

That’s fairly traditional technique, even if the ingredients are a little unorthodox. But then Achatz cuts the rillettes into thick coins, coats them with panko breadcrumbs and fries them. In the process the “patty becomes moist and creamy in the middle and crispy on the exterior,” he says.

That acts as a textural and flavor counterpoint to the saddle of lamb—roasted medium-rare—that is served alongside. Achatz plays down the convenient fact that it’s also an economical use of the trimmings.

In times of economic malaise, the use of scraps to create an interesting dish is not lost on anyone watching the bottom line. After all, rillettes, like most charcuterie, were created as a way of turning waste into something delicious.

At The French Culinary Institute in New York City, rillettes are taught as part of a popular charcuterie class in which participants spend 15 class hours breaking down a whole pig into its constituent parts.

“We use every part of it,” says Nils Noren, the school’s vice president of culinary arts. “Obviously we use the belly for both bacon and pancetta. We make a regular prosciutto. We do salamis and pâtés and rillettes.”

Higher-priced cuts are needed for cured ham and the like, but any scrap can be used for rillettes, Noren says.

New York-based French chef Daniel Boulud says that, in his country of origin, it’s the rillettes of Le Mans and nearby Tours, in the Loire Valley, that are especially prized. Larousse Gastronomique, the French food bible, concurs, describing rillettes in the 1961 edition as “a French preparation made of pork, both lean and fat, cut into very small pieces, gently cooked in lard with the usual seasonings and condiments, allowed to cool and pounded in a mortar.”

Other than salt, the encyclopedia doesn’t specify the “usual” seasonings.

Boulud distinguishes pâté from rillettes by the texture: Whereas the former is cut into slices, the latter traditionally takes the form of a spread.

Rillettes are relatively easy to make compared to pâtés.

“They’re more of a cook’s recipe,” says Kendall Duque, chef of Sepia in Chicago. “You can adjust it as you go along.”

Nevertheless, Boulud cautions that all charcuterie can be “very dangerous” when not handled and stored properly. Since it is typically stored for several days or even weeks, improperly made charcuterie is prone to contamination.

The term rillettes comes from an old French word for a strip of lard and, not surprisingly, pork rillettes are by far the most popular. But Larousse also mentions goose and rabbit as popular choices—always mixed with a good portion of lard, bien sûr.

Boulud remembers making rillettes at his first restaurant, Daniel, with more than a half dozen meats, including pork, duck, rabbit, quail, squab, foie gras and others.

“That charcuterie dish was very sexy,” he says.

Salmon rillettes long have been popular in France, typically made with crème fraîche and a little butter and served, like the pork version, as an appetizer.

In Chicago, Duque of Sepia serves both kinds, making pork rillettes for the colder months and salmon rillettes in the summer. He makes the warm-weather version with both baked and smoked salmon, blending in butter. He serves a rhubarb compote on the side.

At Acadia Bistro in Portland, Ore., chef Adam Higgs gives his rillettes a Cajun twist. He cooks down the classic Louisiana “trinity” of bell pepper, celery and onions, flavored with spices and garlic, then blends it with a mixture of the sautéed crawfish, shrimp and blue crab.

“Whenever possible we’ll try to use shrimp and crawfish with the heads on,” he says. “There’s a lot of good shrimp-head fat in there.”

The shells are removed, and then the mixture goes into the food processor.

Achatz, for one, credits Boulud with giving French charcuterie its current appeal. When he opened Bar Boulud in New York at the end of last year, he put the menu’s focus squarely on charcuterie. Rillettes make an occasional guest appearance.

This summer, for example, the menu has featured rillettes d’été, made with braised pork shank, herbs and tender summer vegetables, blended with olive oil instead of pork fat. In time-honored tradition, those rillettes are made from the shanks discarded from the house-cured ham made weekly at the restaurant.