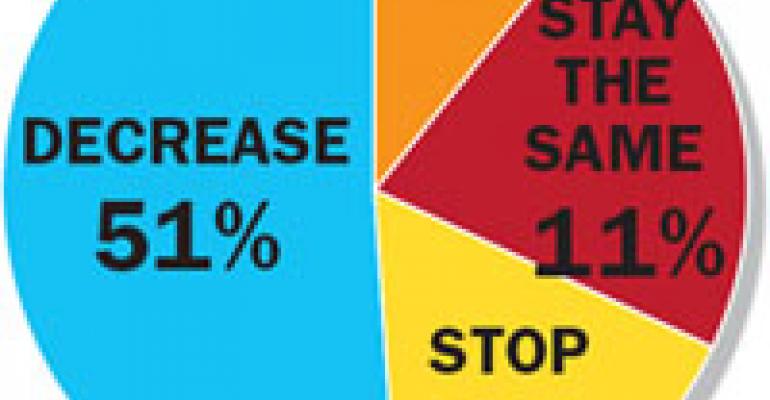 Most consumers haven’t minded forgoing fancy foods and large portions during the recession, but they are expecting better quality and more convenience when dining out. And that’s just what they’re getting, according to industry observers.

“Convenience is a No. 1 driver in many eating occasions,” says Ron Paul, president of Chicago-based Technomic, a foodservice research and consulting firm. And when the economy improves, consumers will only expect their experiences to improve along with it, he says.

“Consumers like being in control,” he notes, pointing to the popularity of drive-thru windows, especially at breakfast and lunch, because they are so easy to access.

That ease of use is also one of the reasons many consumers favor the prepared foods at supermarkets, a huge competitor for restaurateurs.

“Everything is about convenience, and minutes count,” says David Sonzogni, director of research and development and facility design at Central Market, a chain of upscale food stores owned by San Antonio-based H.E.B. Grocery Co.

Comfort counts, too, says Sonzogni, who notes that the recession blues have prompted people to turn to the tried and true—and lots of it.

“People feel a lot better when they have something familiar,” he says.

Central Market’s best sellers over the last six months have included “your meatloafs, baked pasta, pot roast,” says Sonzogni. “It’s unbelievable. People are eating at a level that I never thought would be imaginable.”

Sonzogni notes that “people still like to tease their palates,” however, and he expects as the economy improves consumers will return once again to the high-end and more daring dishes they enjoyed before the downturn rocked their confidence and dulled their sense of adventure.

For now, however, cost remains a factor even at the higher-end supermarkets, Sonzogni says. “People aren’t digging as deep in their pockets,” he says.

Some food markets are now delivering their fare, which is “almost restaurant quality, particularly in takeout,” reports Paul of Technomic. “And the bar only gets higher.”

Expectations are also high for restaurants.

Diners expect “quality is equal to what it was before the recession,” Paul says. “They’ll accept a change in portion size, a steak can be smaller, but they expect the quality to be the same.

“My opinion is consumers only expect things to get better,” he continues. “We don’t expect quality to ever go down. Our new cell phones, cars and computers must get better than the one we had before.”

Still, terrific service often trumps excellent food quality for the majority of diners, according to observers.

Today “less-tolerant” consumers expect “to be greeted properly,” says Paul, noting that it’s not OK, for example, when guests are told to wait for a receptionist who chats on the phone or clears a table. Diners don’t what their time wasted.

“So service has got to be better or you will lose them,” Paul says. “We want to be seated promptly and get someone to the table soon. We don’t want the salad dressing on the side after we finish the salad. We want everything now.”

“You can even get Jay Leno an hour earlier now,” he says, noting that television viewers no longer have to wait until 11 p.m. to see the comedian. That’s the “impatient” culture we live in, Paul adds.

But who is spoiling today’s diners and raising expectations? Apparently restaurants.

Most of SMG’s clients are restaurant companies that Safir says are winning the battle to please patrons by “refocusing their investments toward improving the customer experience.”— [email protected]