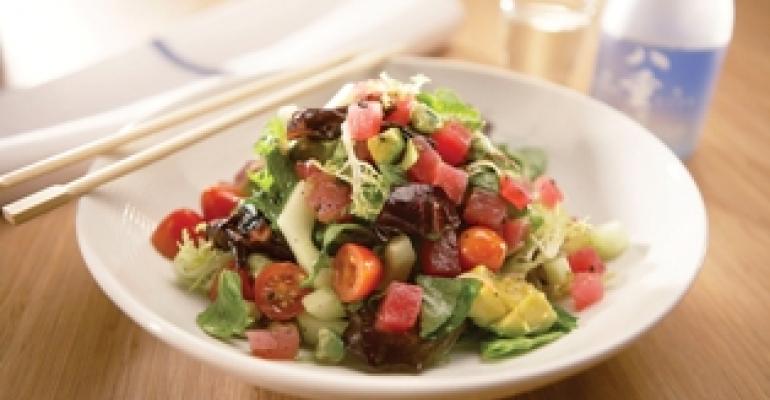 Eyeing momentum around menu-labeling regulations and a public that seems ready to eat better, a growing number of casual-dining chains are adding healthful options to the menu. What’s different about many of today’s newest good-for-you foods is a focus on flavor rather than just the reduction of calories or fat. It’s an approach that’s more culinary and less clinical than what has often come before.

“I think in the past, the industry has tried to take things out of foods to make them better health-wise, but most of the time that affects flavor,” said Kerry Kramp, chief executive and president of Sizzler USA, the 191-unit, Culver City, Calif.-based family dining chain, which is touting healthier soups and salad bar offerings. “But we look for ways to impact the flavor in a positive way, to make compellingly flavored food that is also good for you.”

To that point, Mintel Menu Insights, a service that tracks U.S. menu trends, predicted “a sharp increase in good-for-you food and drink” in 2010. It expects tomorrow’s healthy menus to feature “inherently nutritious items — those with fiber, omega-3, vitamins and antioxidants — that deliver on flavor too.”

Sizzler’s kitchens now make fresh pico de gallo, guacamole and soups in-house with much less sodium than the vendor-made products they formerly used. For example, its Chicken Tortilla Soup now has 560 milligrams of sodium per serving, nearly half the former amount. New lighter salads like Spinach Cranberry, Asian Chopped and Cucumber Tomato have been approved by HealthyDiningFinder.com, a website that tracks nutrition on restaurant menus.

Also looking to prove the power of flavor plus health is Fox Restaurant Concepts, a 27-unit multi-concept operator based in Scottsdale, Ariz. It partnered with nutrition authority Dr. Andrew Weil in 2008 to open True Food Kitchen, a casual Phoenix eatery showcasing high-quality local and regional ingredients in healthful Asian, Mediterranean and California-style recipes. Since then, the 190-seat restaurant has become the company’s busiest restaurant, serving nearly 5,000 covers per week. A second location is poised to open in Newport Beach, Calif., in June with at least two more units planned. Growth capital has come in the form of a loan from P.F. Chang’s China Bistro Inc., also based in Scottsdale.

“We worked very hard to open up not as a health-food restaurant, but rather as a really good food restaurant that happens to be healthy,” said executive chef Michael Stebner.

His creations include Shrimp Dumplings with shiitake mushrooms, ginger and cilantro for $10 and Sashimi Tuna with avocado, cucumber, tomato, edamame and ginger for $14.

At P.F. Chang’s, which has 197 Chinese casual-dining restaurants, cooks and servers are eager to accommodate patrons’ special food requests, said Gregg Piazzi, director of culinary operations. That may take the form of cooking items using the lower-fat stock-velveting method rather than by stir-frying, or adding more vegetables to a dish or creating gluten-free offerings. P.F. Chang’s also is one of a growing number of chains to have a staff nutritionist.

On the menus at Ciudad in Los Angeles and the Border Grill restaurants in Santa Monica, Calif., and Las Vegas, dishes like Turkey Tostada, priced at $14.50, and Wild Mushroom Quesadilla, priced at $13.50, are marked with a small green leaf logo, which signifies dishes that boast at least 80 percent plant-based ingredients. These so-called “Good for the Planet, Good for You” items are offered for customers who may wish to reduce their consumption of meat because of the associated environmental and health impacts, said co-owner Mary Sue Milliken. A self-proclaimed “meat-loving chef,” Millken said she and her family are eating more produce and less animal products at home.

What was surprising, Milliken said, was the realization that a number of the most popular dishes at the restaurants were already in the 80-percent plant-based niche and did not need to be modified to earn the logo.

“I think we’ve always been the go-to girls for really balanced plates with lots of flavorful vegetables and garnishes,” said Milliken.