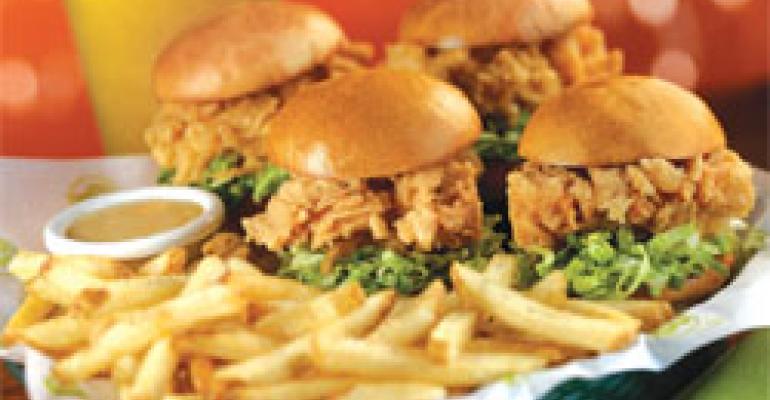 Restaurateurs get big business out of small sandwiches, burgers

The next big thing for foodservice operators is actually pretty small.

Restaurateurs across all industry segments are racing to add miniature hamburgers and other small sandwich variations to their menus as customers demonstrate an unexpected appetite for the reduced-size selections.

Even a growing number of upscale independents, like Ditka’s in Chicago, are menuing their own tiny burgers and sandwiches.

And while bite-sized burgers—dubbed “sliders” in deference to the 86-year-old White Castle chain’s archetypal “Slyder”—are the most popular iteration of the trend, operators already are looking ahead to a second generation of tiny sandwich selections containing such fillings as chicken, crab cakes, hot dogs and pulled pork.

Scott Randolph, senior director of culinary research and development for T.G.I. Friday’s, said the Dallas-based casual-dining chain debuted miniature chimichurri sliders and cheeseburger sliders in September, and since then the popular burgers have emerged as “an instant Friday’s classic.”

Most operators, in fact, report strong sales of mini-sandwiches. Earlier this year Good Times Restaurants Inc. said same-store sales for July and August rose 13.8 percent, driven by the rollout of its new Bambino burger. Those increases follow similar same-store sales hikes of 9.5 percent and 14.1 percent in May and June, respectively.

Industry experts attribute the public’s fondness for small sandwiches to several factors. Laura Tigges, a spokeswoman for Applebee’s International in Overland Park, Kan., observed that the casual-dining chain’s Minibacon Cheeseburgers are popular because they’re easier to share than their full-sized counterparts. Since restaurants tend to bundle the 1.5-ounce to 2.5-ounce mini burgers in groups of three to six per serving, customers can eat one or two and share the rest with dining companions or even take the leftovers home.

Tigges also said women might find them easier to eat.

Health concerns could be another element in the equation, said Harry Balzer, vice president of The NPD Group, the Port Washington, N.Y.-based consumer market research firm.

“It’s difficult to sell ‘healthy’ in restaurants, but Americans increasingly want some form of portion control,” he said. “So we’re finding that if you take food that people like, such as burgers, and give them a smaller portion at a reduced price, they think it’s a good deal. And people believe that smaller is better than bigger in terms of health.”

Ron Paul, president of Technomic Inc., the Chicago-based foodservice research and consulting firm, agrees, saying, “It’s a way to indulge in a bite of burger without ordering a burger as an entrée.”

Paul said the increasing popularity of bar and lounge menus is helping to fuel the trend.

“[Small burgers] work well as bar food,” he said, “and they can help raise the average check in the bar.”

Whatever the reasons for their surge in popularity, though, small sandwiches are becoming a fixture in restaurants. Bennigan’s, the Dallas-based casual-dining chain owned by Metromedia Restaurant Group, introduced both Burger Bites and Chicken Minis on its bar menu, but soon migrated both to its regular bill of fare.

Larry Bellah, MRG’s director of culinary, said the Burger Bites are now the second-most popular item among the chain’s burger selections, while the Chicken Minis—which are made from half of a fried chicken tender—compete favorably with the other sandwiches. Bellah said Bennigan’s plans to add other mini selections in the future.

While most operators say food cost for minis runs about the same as for standard appetizers, labor and kitchen operations can be impacted initially by the rollout.

“The execution can be a little harder,” Bellah said. “When a ticket comes in, a cook might have to make four little burgers instead of one large one, and then garnish some of them differently. You can end up with a lot of little burgers on the grill.”

But guests like it, he added, “so it’s worth the execution.”

As the mini sandwich trend spreads, operators must look for ways to differentiate their selections from competitors’. To give its mini burger appetizer a twist, Columbus, Ohio-based Damon’s International debuted a more upscale Angus-Kobe Mini Burger in March. Served in bundles of four or six for $7.99 and $9.99, respectively, the 2-ounce burger is featured as an appetizer and served on a bun with pickle, tomato and grilled onion on the side.

John Quinn, Damon’s vice president of marketing, said food cost for the premium burger runs about 28 percent, just slightly above that of other appetizers. “But one of the big things we’re trying to achieve with it is to offer a ‘craveable’ item that drives frequency,” he said. “And the guest feedback we’ve received so far indicates they would return for that.”

Other operators also are discovering the scaled-down sandwiches are shaping up to be solid menu performers. Applebee’s originally debuted its Minibacon Cheeseburger as a part of its Ultimate Trios, which enables guests to choose three items from a group of seven specially designated appetizers. However, Tigges said the mini burger has been so popular it will be shifted to Applebee’s new core menu Oct. 22.

T.G.I. Friday’s Randolph said that in addition to offering the chimichurri and cheeseburger sliders—which includes three burgers in an order for $7 to $8—the chain is testing a vegetarian slider with portobello mushrooms, roasted red pepper and roasted garlic on a ciabatta roll.

Uno’s Chicago Grill was early to the mini scene when it introduced sliders two years ago, said Christopher Gatto, executive chef and vice president of food and beverage for the Boston-based casual-dining chain. To help further differentiate its sliders from its standard burger menu, Gatto said the hand-formed burgers have a spicier flavor profile.

Uno also is offering a crispy chipotle chicken sandwich. Gatto said Uno tested a two-cheese tuna melt, but it will be removed from the menu this fall. Meanwhile, he said he will add a new slider with caramelized onion and Gorgonzola cheese on the new menu, and is testing a hot dog slider as well.