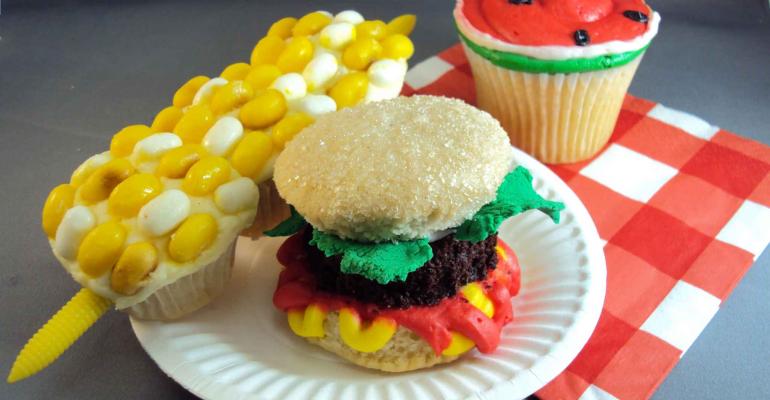 Nothing says “Happy Birthday America” like an attempt to rev the nation’s economic engines, and restaurant operators across the country are pinning promotions to Independence Day weekend with the hope of luring consumers away from their backyard barbecues.

In New York, for example, The Oak Room is offering a Crispy Lobster Bake — a two-pound lobster steamed, de-shelled and fried in tempura batter spiked with Old Bay seasoning and fresh lemon juice — with a side of roasted corn pudding and a red, white and blue potato salad for $39.95.

Also in Manhattan, Virgil’s barbecue restaurant is offering a Suckling Pig Menu on July 4 starting at $55 per person. The family-style menu includes a whole-smoked heritage hog along with appetizers, sides and desserts, all of which is also available to go.

In Washington, D.C., where thousands gather to watch fireworks on the National Mall, restaurants throughout the downtown area are offering an air-conditioned retreat for celebrants.

Equinox, for example, is hosting a cookout July 4 on its patio, featuring burgers, barbecue, hot dogs, vegetable paninis, coleslaw and potato salad. Both inside and outside dining is available. Prices start at $9.

In Dallas, RA Sushi — one of 25 locations of the concept owned by Miami-based Benihana Inc. — is featuring a patriotic cocktail: the Stars and Stripes Martini, made with vodka, blue curacao, raspberry liquor, and muddled blueberries. The drink is priced at $7 and available through Sunday.

In Massachusetts, Summer Shack restaurants with locations in Hingham, Back Bay or Cambridge, are offering a special red, white and blue angel food cake with mixed berries this weekend. It is available for $2.34 — because it’s the nation’s 234th birthday.

Cupcake bakeries are also in the spirit with a variety of themed treats. Yummy Cupcakes, with locations in New York and Santa Monica, Calif., is featuring a red velvet cupcake with an icing-flag on top, while Sprinkles Cupcakes, based in Los Angeles, is offering a 4th of July box through July 11 featuring lemon, blueberry and red velvet cupcakes capped with red and blue stars on the white lemon-cream cheese icing.

Others are turning to discounts to build traffic this weekend.

The Tully’s Coffee chain is offering free drip coffee from 7 a.m. to 10 a.m. on Friday at participating stores throughout the 200-unit chain in the United States. Also, guests can buy one barista drink and get a second free through Monday.

“There’s no better way of celebrating the holiday weekend than by enjoying an amazing deal on the best coffee and barista drinks in town,” said Carl Pennington, president and chief executive of TC Global Inc., the Seattle-based parent of Tully’s.

The 21-unit Il Fornaio casual dining chain is declaring “Corkage Independence” for the month of July, allowing guests to bring their own wine with no corkage fee.

The nearly 300-unit Bruegger’s Bagels chain on Monday is wrapping up its two-month-long campaign offering a coupon for a free bagel and cream cheese to Facebook fans. The campaign has helped double the chain’s Facebook base to more than 88,000 and more promotions are planned using the social media format, officials said.

In San Francisco, the restaurant Masa’s is using the weekend as the start of down time for its own staff.

The restaurant is taking a two-week vacation from July 4 through July 19. Executive chef Gregory Short is hosting a pantry-cleaning dinner on July 3 for the last day of service.