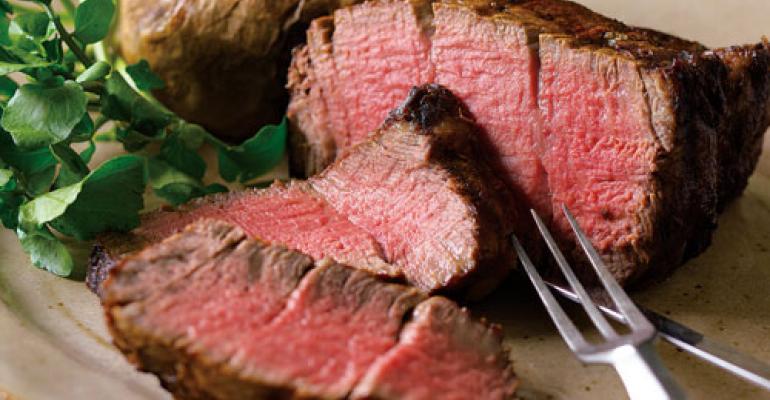 While brunch draws crowds on Mother's Day, restaurants around the country are looking to hearty dinners to lure customers away from backyard barbecues during Father's Day weekend.

From national chains like Morton's The Steakhouse, Outback Steakhouse and T.G.I. Friday's to local eateries like Patsy's in New York City, restaurants are using promotions and special menus to draw customers this weekend. And with the focus on dads, restaurants are offering special meat dishes and steak giveaways.

Morton's is offering a three-course Father's Day menu for $69 per person from 5 p.m. until 10 p.m. on Sunday, featuring a soup or salad, an entree and dessert. The steakhouse chain is also hosting an online contest for guests to win a steak and seafood dinner for four.

Special menus, like the one Morton's is offering on Father's Day and has offered on Mother's Day, help drive weekend sales, said spokesman Roger Drake.

"Whenever we offer a special menu like we're doing on Father's Day, we always see that weekend a fair amount of additional guests who dine with us," Drake told Nation's Restaurant News.

And while the Mother's Day crowd typically dines earlier, on Father's Day customers come for dinner and are looking for something special to "treat dad," he said.
"We've had a very strong response so far, just like we have with our Mother's Day menu," Drake said.

Sal Scognamillo, chef and co-owner of Patsy's -- which has been in his family for three generations -- said he created the menu with a focus on what would appeal to dads when they went out for dinner.

"It's a hearty dish that's going to fill them up," he said. "A big veal chop or a steak."
Patsy's menu features appetizers like Stracciatella soup and fried mozzarella, veal and steak entrees, and dessert for $65 a person, not including tax and tip. Additionally, every dad who dines at Patsy's on Father's Day gets a free jar of the restaurant's homemade tomato-based sauce.

Special holiday menus, especially for family-focused holidays, he said, show customers that you're thinking about them and how to create meaningful experiences for them.

Other restaurants around the nation also are offering promotions and menus for dads:
- T.G.I. Friday's has a three-course menu available for $16.99 on Sunday, with several appetizer, entree and dessert choices, including the restaurant's Black Angus sirloin and Jack Daniel's chicken and shrimp.

- Outback Steakhouse opens at 11 a.m. on Sunday for Father's Day. The chain is holding a weekend-long promotion in which dads can win free Outback food for a year (two $25 vouchers a month for a year). Dads could also win $25 vouchers and coupons worth $5 off for their next visit.

- California-based burger chain The Counter is offering free burgers to dads who request the "Burger For Dad" by name at its 22 locations.

- The BJ's casual-dining chain is holding a series of Father's Day promotions including free BJ's pint glasses for dads on Father's Day and a special drink menu and golf vacation giveaway running all month.