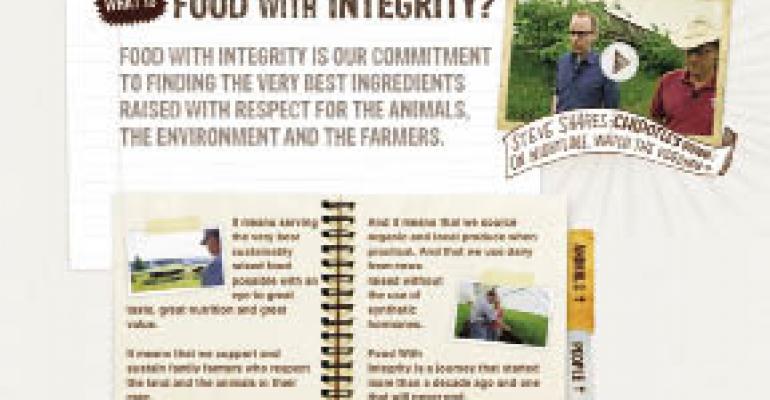 Marketing focused on ingredient authenticity pays off for national brands

In some print creative and  radio spots, Chipotle mentions “our ad agency” as a firm the chain purposefully ignores because it suggests boring advertising typical of restaurant marketing. But the agency is a straw man; Chipotle created the campaign, which focuses on the chain’s authenticity, in-house.

Given consumers’ growing interest in product quality and sourcing, Chipotle and other restaurant companies are getting real — or at least making the case in advertising that they or their products are the real thing. Both Domino’s Pizza and Wendy’s also tout their authenticity in their marketing campaigns.

But advertising experts would caution marketers that saying they’re genuine does not make it so, and that the onus is on brands to back up those claims with consistent messaging and operations. Denver-based Chipotle always has procured meat and produce raised as naturally and locally as possible, and the recent campaign is the first attempt to bring that philosophy from the back-of-the-house to center stage, officials said.

“We think the time is right to focus more of our marketing on our commitment to finding the best sustainably raised ingredients we can,” Chipotle’s chief marketing officer, Mark Crumpacker, said in a statement. “While we have never sourced these ingredients to be a marketing platform, it is what makes Chipotle so different from other restaurant companies, and we think people are more receptive to hearing it now than ever before. The more people know about the lengths we go to to source the best ingredients, the more likely they are to become loyal customers.”

“Chipotle does tend to stand for something on where its food comes from, but the campaign is essentially just about revealing that without saying that they’re authentic,” Denari said. “You want to lead the consumers to the conclusion, and then let them connect that final dot. People know they’re being sold something, so if you can get someone to conclude you’re authentic, then you’ve done your job.”

Consistency earns the perception of being real or genuine, Denari said, citing as examples Jack in the Box’s long-running ads with irreverent mascot Jack, McDonald’s “I’m lovin’ it” campaign and Chick-fil-A’s decade-long success using cow billboards to sell chicken. Those chains have built trust with their consumers by staying themselves for years, he added, so they’re still regarded as genuine even when they advertise products without a halo of healthfulness, freshness or sustainability.

“It’s fine to be authentic, but be careful how you portray it,” said Denari, who was chief strategist for Steak ’n Shake’s advertising during Young & Laramore’s 18 years on that account. “To me, authenticity is just being who you are.”

But sometimes it’s not so simple to figure out for a national restaurant brand.

Wendy’s “real” campaign, created by Kaplan Thaler Group, has emphasized ingredient quality to promote new products, such as the North Pacific cod in the chain’s fish sandwiches or the applewood-smoked bacon topping its burgers.

“Consumers are demanding real,” Calwell said. “They are looking for real food and ingredients — ingredients they can pronounce the names of and that are close to the source — and shorter ingredient labels.”

“It’s that kind of attention to detail that we think makes the salads special,” Calwell said.

While Denari’s thoughts on authenticity hold that Wendy’s shouldn’t have to tell people it and its food are real, he said the brand would benefit if the campaign could run as long as the quality-focused commercials featuring Thomas did.

“It was striking when Wendy’s did that campaign all of a sudden, finally,” Denari said. “After Dave [Thomas’ death], they were reeling for quite a while.”

If any restaurant company has benefited from keeping it real this year, it’s been Ann Arbor, Mich.-based Domino’s Pizza. After listening to complaints from focus groups for a long time, the chain took an honest look at its signature product and spent more than a year reformulating its core pizza from crust to cheese.

When Nation’s Restaurant News asked chief executive Patrick Doyle how much of the sales increase resulted from the new pizza and accompanying ad blitz, he replied, “All of it.”

“When Domino’s came out and said, ‘Look, our pizza sucked,’ that was pretty bold,” Denari said. “People take notice when you’re actually being honest about your product. They think, ‘They must be honest, because they wouldn’t disparage their own product if they didn’t have something better.’ Meanwhile, everybody says their products are ‘new and improved.’”

Domino’s now plans to continue its efforts at honesty and transparency by using only photographs of actual delivered pizzas taken by real customers in all of its national advertising. Consumers not only will provide all Domino’s food shots, they also can win a $500 prize for submitting their work to the chain’s online “Show Us Your Pizza” contest.

“It’s a natural progression for us now to take this step,” chief marketing officer Russell Weiner said in a statement. “If we’re going to be real and honest about the taste of the product, we want to be as authentic as possible about how it looks.”

Keeping the same brand messaging from commercial to commercial or one product rollout to the next — as Domino’s has done going from “Pizza Turnaround” to “Pizza Holdouts” and now to “Show Us Your Pizza” — works because “companies get way more bored with messages before consumers do,” Denari said.

Customers also maintain positive feelings about brands when their experiences are consistently good, he added.

Chick-fil-A’s “Eat Mor Chikin” cow campaign has stood the test of time and won awards, “but as much as I think it’s a good idea and iconic, it’s not the secret to their success,” Denari said. “They’re successful because it’s a consistent product, their stores are clean, and the service is always great. They don’t spend the money on ads like the bigger guys, and they still do well. McDonald’s also retooled what went on inside, and people can count on them again. Focus on the inside first, then outside on what you’re telling people.”