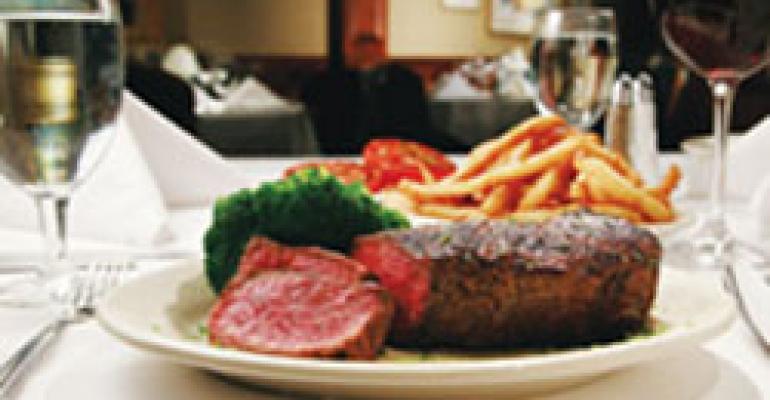 Premium beef, most prominently Japanese Kobe and its American counterpart, is gaining popularity among chefs, who have taken to using the highly marbled, flavorful protein for everything from simply prepared steaks to burgers and pasta.

Even as chefs say some diners are more educated about specialty beef and less likely to balk at its higher prices, restaurants are experimenting with different preparations and domestic and Australian beef to keep prices low and take the product to a larger audience.

Wagyu cattle, the breed from which Kobe beef is derived, is known for the layers of fat that snake throughout the beef and provide a level of richness that is tough for other meats to match.

“You know the little outer edge of the rib eye that’s real tender?” asks Thomas Wolfe, executive chef of Wolfe’s on the Warehouse in New Orleans. “It’s like that throughout the whole cut of meat. That’s how wonderful it is.”

Wolfe imported Japanese Kobe beef for a recent dinner at the James Beard House in New York. He served a Wagyu strip loin with mushroom “ceviche” and asparagus wrapped in Serrano ham.

When he puts Wagyu on the menu at his restaurant, he uses the American version partly because of the price and partly because he says that most of his customers are not used to the full richness of the Japanese version. Those beef dishes usually sell in the $35-$40 range.

Jim Cannon, vice president of culinary for Heathrow, Fla.- based Ruth’s Chris Steak House, says high-quality beef should stand on its own. The chain offers a Kobe-style beef burger on the menu at $14.95, and Cannon says many of the chefs at his 118 units will offer Wagyu strip steaks and chops as specials. But they keep the presentation simple.

“We want the flavor of the beef to come out,” he says. “We don’t want to kill it with sauces.”

The steaks are cooked in a 1,800-degree broiler, similar to a salamander, and finished with salt, pepper and butter. Cannon says that Ruth’s Chris buys its Wagyu beef from Australia, where the cattle is grass-fed, until a 200-300 day period where a mix of grains is incorporated into their diet.

Other chefs, however, experiment with accompaniments and presentations to make the upscale product more accessible to guests that might be turned off by the high price tag of a premium steak.

Chef Giuseppe Fanelli of Tre Dici in New York, for example, uses American Kobe beef in a ravioli. The pasta dish sells for $19.

“If you use the product straight on the grill or as an entrée it would be about two and a half times the price” he says. “You are able to stretch it out more with other ingredients.”

For the ravioli, he sears the beef to medium rare, shreds it and then mixes it with fontina cheese, caramelized mushrooms and Sicilian Marsala to create the pasta filling.

“Shredding allows me to extend [the product] even further,” Fanelli says.

Matthew Crone, the executive chef at The View Point Inn in Portland, Ore., is a big believer in sustainable, local and natural ingredients. He gets American Kobe from Washington state and offers it in a beef carpaccio appetizer with black truffles, crème fraîche and “red wine caviar” for $14.

He is also experimenting with a dish in his test kitchen that incorporates Wagyu strip steaks and transglutaminase, a natural food additive derived from seaweed. He stacks three to four steaks, adds the transglutaminase and wraps the stack in plastic wrap. Left overnight, the additive acts as a protein binder and forms the stacked steaks into a seamless piece of meat. Crone hopes to have the dish out of the testing phase and onto his menu in the not too distant future.

Tim Elliot, executive chef of Mei N Yu in Washington, D.C., wants the flavor of the beef to be paramount. He currently uses American Kobe beef in an appetizer, an entrée and a shareable dish priced for two people.

“I try to sell it as rare as possible,” he says. “You get a better flavor for the beef.”

Mei N Yu bills itself as a “Silk Road Celebration,” offering dishes inspired by the regional cuisine of explorer Marco Polo’s route. That includes areas ranging from Northern Africa and the Mediterranean to China.

“I feel that it is part of the chef’s point to educate the guest on different things like Kobe beef or other specialty items that are not really [readily available] at a common grocery store, ” he says.

Elliott sells a ginger beef tataki starter for $10, composed of lightly seared Kobe-style American beef, sliced thin, served with yuzu soy sauce and daikon sprouts. Citrus Kobe beef, $38, which is his take on orange beef, is served with a citrus demi-glace made with ginger, citrus zest and chile peppers as well as stir-fried lotus root. He also offers a larger cut of Kobe, covered in a green-tea rub, seared and served with a bacon edamame succotash and Taleggio potato gratin. The dish, which is designed to be shared, is $58.

Despite the rather crowded steakhouse market, chef David Burke of Primehouse in Chicago says there will always be room for those concepts that focus on a high-quality experience. Burke has plans to open another location at the Foxwoods Casino in Mashantucket, Conn., this summer.

“With anything, the strong will survive,” he says. “There have been steakhouses that have been in New York for decades. There still has to be perceived value. The meat has to be good. You know, I think Americans are getting smarter on beef. People are learning what a quality steak is.”

To meet his own high standards for quality steak, Primehouse uses only beef derived from the lineage of a single Black Angus bull, which he says has been graded as one of the best for reproduction in the country.

Still, he is no stranger to specialty product from outside the borders. He sells Japanese Kobe steaks at his restaurants as specials for $25-$30 an ounce. Then there is a Kobe carpaccio appetizer on most of his menus, from davidburke & donatella in New York to David Burke Las Vegas.

“People seem to buy it,” he says. “They are not afraid of the price. I think it’s a novelty item. Sometimes we do a combination of dry-aged [U.S.-raised beef] and Kobe so you can see the difference.”