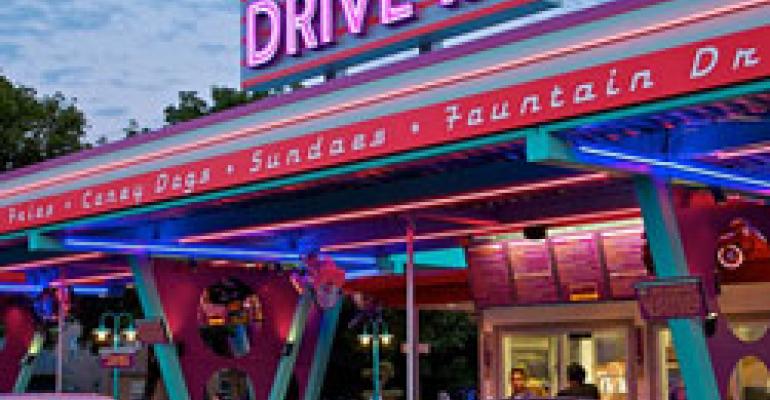 MINNEAPOLIS Steven Schussler, the creative mind behind such eatertainment concepts as Rainforest Cafe, T-Rex and Yak & Yeti at Disney World, has most recently unveiled a project nearly in his backyard here, converting a 1951 neighborhood institution into the Galaxy Drive In.

Click here for a slide show of photos of Galaxy Drive In.

His company, Schussler Creative Inc., which is based in Minneapolis, opened the Galaxy on July 15 after a $850,000 renovation-turned-construction of the former Wagner’s Drive In in his St. Louis Park neighborhood. Schussler said the new teal, purple and pink drive-in is serving 1,200 to 1,300 customers a day and has a check average of about $10.

“We went in with the idea of renovating it,” Schussler said Tuesday, “but we found so much grease and dirt that we decided to just reconstruct it.”

The 550-square-foot project sits on an acre, so Schussler was able to add handicapped-accessible restrooms; menu boards that hang from the drive-in’s roof rather than poles, which are often hit by cars; fire pits; sculptures; and a human-sized chess set for entertainment.

Galaxy Drive In was created as a part of Schussler Creative’s two-year partnership with RED Development, the shopping mall developer based in Kansas City, Mo.

The property, which Schussler said is about five blocks from his own home, also has as area set aside for curbing pets and special menu treats for “four-legged friends.” Those include dog-bone treats for $1 and Doggie Mini Burgers for $2.25.

The most popular menu item in the past month, he added, has been the quarter-pound Angus “Earthling Burger” with onions and pickles for $3.85. The menu also features root-beer floats for $3.75; the Lunar Eclipse grilled cheese sandwich for $2.75; the Cosmic Chicken Dinner, a quarter chicken with fries and slaw for $7.57; and a Galaxy Philly Cheese Steak Sandwich for $4.89.

A$10 S’Mores Kit, which “serves four to six earthlings,” comes in a plastic tube with sticks, chocolate, marshmallows and graham crackers, including directions and food history, so guests can make their own at the on-property fire pits, Schussler said.