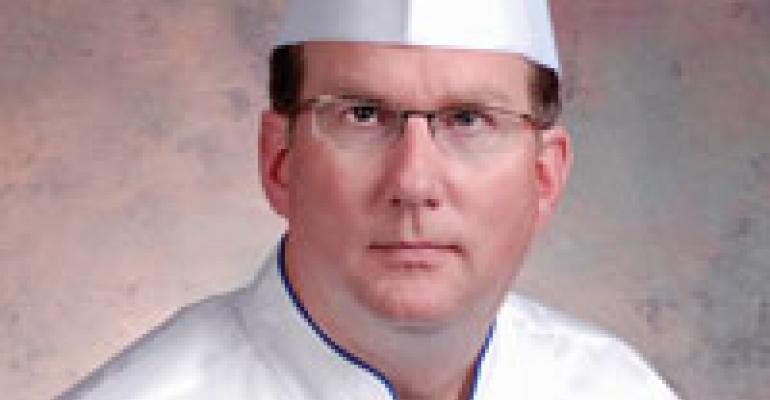 Sodexo executive chef explains the power of its meatless items

As with other major business and industry operators, Sodexo has put health and wellness front and center of late. Among the health and wellness programs the company recently has initiated is Meatless Monday. Rolled out as a test last year in select locations and now available nearly systemwide, Meatless Monday items are, in some locations, outselling menu items focused on meats.

What is Sodexo's secret to creating meatless meals that actually sell?

It's not just about taking care of those who eat meatless everyday, but also those who have never considered meatless. It's the culinary invitation to them to try it. Bring them over to give it a whirl. We wanted to have items that are great food, taste great, but by the way, just happen to be meatless. That's a good formula for healthy fare, too. The formula is to first focus on great flavors and food that is satisfying, as opposed to strictly by-the-numbers or strictly by health. Ultimately, what we're looking for is craveability. The most popular [meatless] items have been those that are recognizable flavors [presented] in surprising ways.

What's on the menu?

It's been a tremendous range of items. We've prepared some more ethnic, some more mainstream. We focus on a familiar flavor, such as General Tso's chicken. We replaced the breaded chicken with cauliflower. It has the look, feel and taste of the original. It's a more indulgent example. Most items tend to be more healthy, but some are more indulgent to bring people over. Portobello wrap is another example [Roasted portobello mushroom, fresh tomato, spinach, mozzarella and basil with a balsamic vinaigrette on a multigrain roll]. From a nutrition perspective it's rock solid good nutrition.

How do you create meatless meals that defy the perception that good-for-you doesn't equal good-tasting?

We spent a lot of time thinking about flavor. What [going meatless] forces us to do is use ingredients in their more natural form, focus on items at their peak of freshness so that they have maximum flavor. We use a lot of ethnic flavors. The meatless side isn't so difficult if you're not concerned about health and wellness. Cooking without so much fat, salt — that's a little more difficult. To make an item healthy it's all about limits. You can't have fat, can't have salt. Items get so distilled that you can't have flavor. You need to make sure you have whole grains, spices, add extra flavor. If dry spices are toasted, it amplifies their flavor and totally takes away the need for salt. It really dissects taste and flavor and draws 100 percent of the taste and flavor out of the food. It's honoring the food. If you're doing that, if there's no meat it doesn't matter.

How do you make meatless fare work from a food cost and labor cost standpoint?

The challenge with food costs, to some degree, is seasonality. We're at a tough time of the year for fresh produce. You have to be mindful ... Being flexible in menuing in season, getting the best produce at the lowest prices. Does it take more labor? I don't think it does. It takes better-trained labor. You've got to do some culinary education. We've put those fundamentals in place for a few years to execute it, to make it work.

We have a strong focus on health and well being and what's around that's fresh and seasonal. We have a very different menu matrix, it has a major focus on wellness and, by percent, a greater number of meatless items [than ever before] because of the success of Meatless Monday. It's still a small piece, but it's growing.