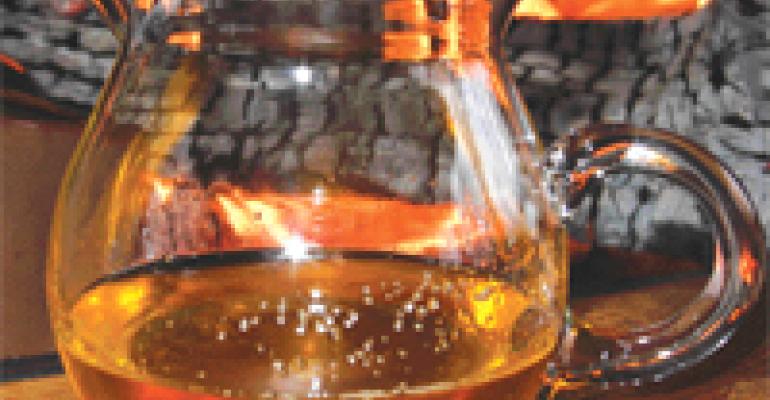 As cooking fats go, the ones from poultry have both a rich tradition and a rich taste. From duck fat used in confit to schmaltz, rendered poultry fats are maintaining fans even in a culinary landscape populated with dietary concerns.

Poultry fats are a cost-effective use of kitchen product and add subtle flavor to dishes, restaurateurs say. They are showing up on menus coast to coast, from chef Matt Carpenter's duck fat fries at Bin 8945 in West Hollywood, Calif., to chef Paul Drew's pan-seared scallops with corn and tomatoes, a dish prepared with chicken fat, at Phillips Seafood in Atlantic City, N.J.

Dan Wilson, general manager of the two-year-old H.P. Schmaltz & Co. in Naperville, Ill., which has a sister delicatessen in nearby Downers Grove, says the restaurants' latkes and chopped liver are made with chicken fat. In the deli tradition, the fat is called schmaltz. "It's a lot tastier than a lot of cooking fats that people use," Wilson says. "The flavor is real."

Schmaltz, which is served as a tabletop bread spread at Sammy's Roumanian Steak House in New York, has rich heritage in the Jewish community, from which it gets its Yiddish name.

"Most of the time I have to describe it [to customers]," Wilson says. "But if you are Jewish, you will know it."

When asked, he describes it simply as "rendered chicken fat."

Nutritionists, however, are hesitant to endorse schmaltz or any other poultry fats, no matter how they are rendered or served.

"Oils are much preferred over animal fats for health," says Katherine Tallmadge, a registered dietician in the Washington, D.C., area. "The type of fat you eat is critical to your health. This is because fat ends up in all of your body's cells. If the fat you eat is saturated - solid at room temperature, as in butter or animal fat - this decreases cellular flexibility and functioning.

"Scientists have found saturated fats are correlated with many health problems. For one, they raise LDL [low density lipoprotein or 'bad'] cholesterol, and this leads to increased levels of heart disease, heart attack, even dementia and Alzheimer's."

Still, many chefs are undeterred.

"When my butcher breaks down the chicken, he saves it on the side," Bertineau says. "I cook it for maybe one hour or an hour and a half until all the fat comes out. It has a very strong chicken flavor."

He uses duck fat for his own duck confit.

"I sometimes use a pheasant," he says. "The legs of the pheasant are so very dry - if you just roast it, it is very tough. I make confit of the legs by seasoning them with salt and pepper and herbs. They are marinated in the duck fat for one day. It makes them very juicy."

He uses the cooked confit in cassoulet.

European chefs seem to use poultry fats with greater frequency than many chefs trained in the United States.

"It's much because of tradition," Bertineau says. "Europeans often use pork fat back or lard more often. It was used for centuries, initially to preserve food. Ducks have so much fat. You use it to preserve food and to cook. French food comes from the country to the city. In the country, you use what you have around. You use everything. Butter was expensive. For the French, it's tradition. In the Southwest of France, they still use a lot of duck fat. In Normandy, they use more butter because they have more cows."

David Waltuck, chef owner of the 65-seat Chanterelle in New York, says: "I'm quite fond of duck fat. I'm fond of fat in general. It feels good in your mouth. It smoothes out and rounds out flavors and makes everything delicious." A popular dish on Waltuck's menu, which changes monthly, is a duck mixed grill that features duck leg confit, house-made duck-and-foie-gras sausage, grilled foie gras, grilled duck breast and a skewer of gizzard confit and duck testicle.

"That's served with a duck fat bearnaise, which is made with duck fat instead of butter," Waltuck says. "It's very delicious."

Sales of the duck mixed grill are mixed, Waltuck says.

"It's never the most popular dish or the least popular," he says.

Waltuck renders his own duck fat and also purchases it from a purveyor.

"If I have a lot of trimmings, I'll render them and use that," he says. "More often I buy it."

He says he's always been a fan of poultry fats.

"But too much is not good for you," he says. "It still tastes wonderful. It's real subtle. It's got a silky quality that it shares with butter. It's not a specific taste."

He sautees bay scallops with basil and garlic in duck fat and finishes the sauce with duck fat.

"Essentially, it's scallops Provencal except instead of olive oil to saute and finish, you are using duck fat for both," he says.

Poultry fats are similar to butter in the weight and feel, he says.

"If you are [re]using duck fat in making confit, there's a point you have to stop using it because of the intense saltiness. I wouldn't use confit fat for anything other than confit." Waltuck will also use chicken fat inside dishes, such as a potato spring roll. That is made from mashed potatoes mixed with onions that have been sauteed in chicken fat and liberally salted and peppered. The mixture is rolled in a spring roll wrapper and fried. He says the dish in an alternative to a potato knish.

Chef Adnen Marouani of La Maschera Ristorante in Pasadena, Calif., uses duck fat in his roasted duck with orange-honey sauce. Chef Joshua Hollinger of The Coach House restaurant and The Carlos Fuente Club House at the Harbor View Hotel on Martha's Vineyard, Mass., cooks his Belgian-style truffle fries with white-truffle oil, aged Parmesan, and a fat that is a combination of duck fat and canola oil.

Kevin McCarthy, executive chef at The Point Resort in the Adirondacks in Saranac Lake, N.Y., says: "We use duck fat all the time. We braise cabbage in it, we confit all types of root vegetables and potatoes with it, we use it as the fat content for our breakfast sausage, and it is great when it is cut into small chunks and added to a burger."

Chef Drew of the 74-seat Phillips Seafood at the Pier Shops at Caesars in Atlantic City says chicken fat, like chicken stock, is very subtle in flavor. For a scallop dish, Drew skims the fat off the top of the stock, adds cilantro and fresh corn and slowly cooks it in the oven.

"[It has] a nutty-woody flavor from the roasting as well as the delicate flavor of the chicken fat," he says.

He removes the corn kernels from the cob, adds cherry tomatoes and sautes them both in chicken fat. That is served with pan-seared scallops and shoestring potatoes to give the dish height and a flavor contrast, he says.

Drew rescues pan fat from roasting chickens and refrigerates it for later use. "Don't throw the fat away," he says. "The flavor is exceptional."