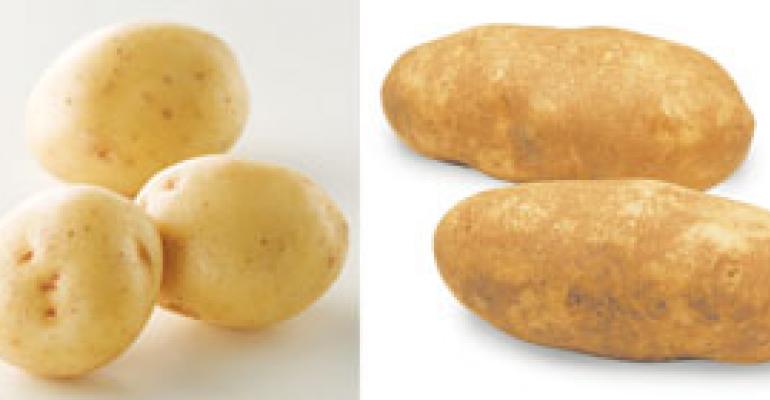 Potatoes put skin in the game

When Bill Horst was in college, his friends called him the “potato king.”

They were versatile, everybody liked them and—crucial to a college student’s budget—they were cheap.

Horst went on to work in the financial industry, but recently he returned to his passion and started experimenting with potatoes again. That included cooking paper-thin potatoes and bacon at the same time in the same fryer.

The resulting “Who’s Your Daddy” bacon potato chips have become something of a sensation in San Francisco, where Horst started selling them in Dolores Park as part of the city’s burgeoning street food scene, for between $3 and $5 a bag, depending on the size.

They’ve been successful enough that Horst now is making them in a commercial kitchen.

What first drew Horst to potatoes continues to attract chefs to this versatile tuber that long ago captured the hearts of Americans. It’s also gluten-free, easy to work with and a hallmark of many cuisines, from Jewish and German to Peruvian and Italian.

According to the U.S. Department of Agriculture, Americans on average eat 126 pounds of them each year. That figure might sound high, but it takes four pounds of fresh potatoes to make one pound of dehydrated potatoes, which are used to make most commercial chips.

At Sra. Martinez, Michelle Bernstein’s Latin-tapas restaurant in Miami, the chef tried to make a traditional Spanish dish, patatas bravas, which is made from big wedges of roasted potatoes served with a spicy sauce and aïoli.

“But they were just OK,” Bernstein says. “I thought I was doing an injustice to them. So I decided to go Latin, which I’m obviously more familiar with.”

Her choice of the type of potato to use was influenced by an American delicacy that she says she loves: potato skins. She takes tiny new potatoes, roasts them until soft, fries them á la minute, cuts off the ends and fills them with the huancaina sauce and Serrano ham that she crisps up in olive oil. She tops it with cilantro.

“So it’s kind of papas huancaina and papas bravas and American potato skins all mixed together,” she says.

At Miami Beach steakhouse Meat Market, chef Sean Brasel makes his own version of tater tots, which he stuffs with Gouda cheese.

“We take Yukon gold potatoes and basically shred them,” Brasel says. He mixes them with salt, pepper and a little cornstarch, rolls it into balls, stuffs them with shredded Gouda and deep-fat-fries them. He sells a dish of about six of them for $8.

Yukon golds are also Scott Howard’s potato of choice for his buttery mashed potatoes inspired by those of Joël Robuchon. The chef of Five in Berkeley, Calif., bakes them on a bed of rock salt.

“The salt helps pull out more of the moisture so you have a really dry, potato,” Howard says.

He rices them and then whips in room temperature butter, “almost like you were making a beurre blanc,” until the dish is about half butter. He finishes it with a little milk, salt and pepper, and sometimes, just to gild the lily, tops it with truffle butter.

“Everyone can judge a mashed potato,” he says. “If you do them well, it really sets you apart.”

New York chef Daniel Boulud says potatoes are typically harvested around mid-August, but at that point their water content is too high to make excellent French fries because they get soggy faster than an “aged potato,” so he asks his suppliers to hold on to some of last year’s crop until October, when the water and sugar content of the new potatoes are right for frying.

If the sugar content in a potato is too high, it will burn on the outside before the center is properly cooked.

Boulud charges $6 for a side of fries at his new burger-and-sausage restaurant, DBGB Kitchen and Bar in the Lower East Side area of Manhattan, and they’re included in the price of burgers, which can run as high as $19.

For his bacon potato chips, Horst uses Kennebec potatoes, which he says are the variety used by the big manufacturers.

“They’re specifically designed for frying,” he says, “so they give much more leeway before burning, and they have a nicer, golden look to them.”

Horst started with Russet potatoes, which he prefers because of their meatiness, but his customers overruled him.

Daniel Angerer, the Austrian chef-owner of Klee Brasserie in New York, uses small purple potatoes from the farmers market for his version of German potato salad.

He doesn’t actually vacuumseal the potatoes, he just slices them and puts them, along with the seasonings, in a Ziploc bag, and cooks them in water at 186 degrees Fahrenheit for around two hours.

He says that, by slow-cooking the potatoes, they retain their purple color.

“It’s beautiful looking, and even better tasting,” he says, “although you have to season it again after cooking it, because it loses a little flavor during the cooking process.”

Before plating the potatoes, he tosses them with Italian parsley or arugula.

He also offers it as a side dish, called “greenmarket potatoes with arugula” for $6.

Some other New York chefs use potatoes in place of wheat, especially in Italian food.

At Pizzeria Veloce, chef Sara Jenkins mixes durum wheat with cooked potatoes and the cooking water for her pizza dough.

“It makes it quite tender and sweet,” Jenkins says.

At JoeDoe, also in New York, chef-owner Joe Dobias says he always has a potato pasta on the menu, and it’s not always gnocchi.

“I think potatoes are a little more user-friendly for the restaurant,” he says. “They’re a little more stable, a little less labor-intensive than semolina, more forgiving and they don’t require as much expertise.”

He oven-bakes the potatoes until they’re just cooked, and then he lets them cool.

“Most people make gnocchi when the potatoes are hot,” he says, “but I think it just makes a tougher dough. So I tend to cool the potatoes completely; I even put them in the fridge.”

“It’s a little trickier than gnocchi, which is more or less a ball,” he says. “You need a finer dough and you have to process the potato a little more so not to end up with tough pasta.”

He serves it with broccoli raab, Berkshire pork and sweet corn to imitate a carbonara. He also makes a dish inspired by East-European Jewish knishes and Moroccan-Jewish pastelico.

“It’s more or less a mashed potato that’s combined with whole eggs and then dipped in whole egg and fried,” he says, so it forms a crust even though, unlike a knish, it’s not coated in flour.

“It leaves itself open to a lot of preparations,” he says. “In the Moroccan recipe it’s stuffed with ground beef, but ours is basically a scallion mashed potato.”

He says mixing the egg into the potatoes gives it the stability necessary for deep-frying, “so it doesn’t fall apart in the fryer.”

He serves it with a grass-fed hanger steak for $25. He currently is using local Carola potatoes from Sheldon Farms in Salem, N.Y.

Not far from New York City, in the upstate town of Ellenville, chef-owner Marcus Guiliano of Aroma Thyme Bistro uses potatoes where many others use wheat to make his food gluten-free.

“By doing things gluten-free, we open up a whole new market,” he says.

So to thicken his soups and lobster bisque, he throws in whole thin-skinned potatoes while the soup is cooking and then purées them with the soup.

“I like to use smaller ones, so we get a higher skin-to-flesh ratio,” says Guiliano, because he likes the skin’s flavor. “Some of the fingerlings we get are literally the size of a fava bean.”

When they’re not in season, he uses B or C size Yukon golds. He uses those potatoes as the binder for his crab cakes, too.

“I tried quinoa and millet, but Yukon gold works best for us, because it keeps the crab cakes moist,” he says.

He simply purees the potatoes and folds in all of the other ingredients, forms them into cakes, fries them and serves them.— [email protected]