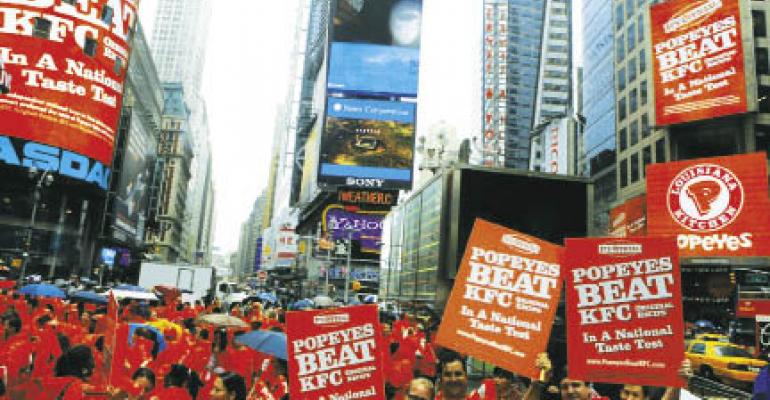 It all seemed pretty familiar. The crowd in New York City’s Times Square launched into a raucous celebration after the countdown on the giant screens around them reached zero.

But the scene was too early, too warm and too sober to be a New Year’s Eve celebration.

Actually, the revelers, clad in the signature orange of Popeyes Louisiana Kitchen, were gathered in Times Square on a late August afternoon to celebrate the chicken chain’s victory over KFC in a nationwide independent taste test.

And Popeyes, the 1,945-unit chain owned by Atlanta-based AFC Enterprises Inc., kept the party going with a “Love That Chicken from Popeyes” campaign that included TV commercials, the Times Square public-relations bonanza and digital executions.

While it was too early for the brand to disclose the sales-driving impact of its taste test victory lap, both Popeyes and industry watchers said the campaign did much to highlight the brand’s heritage and boost its perception of quality.

While the taste test evoked comparisons between Popeyes’ Bonafide chicken and KFC’s Original Recipe — as did  the www.popeyesbeatkfc.com  microsite — Popeyes tried chiefly to emphasize the singularity of its traditional Louisiana menu, said chief marketing officer Dick Lynch. For instance, a full-page ad in USA Today boasted that Louisiana, “the land of good cooking,” triumphed over Kentucky, “the land of fast horses.”

“Our marketing strategy has been very overt,” Lynch said. “One dimension is to focus on our famous and favorite items like Bonafide chicken, and the other key is our Louisiana positioning. Everything from the menu platform to the taste profile has something to do with Louisiana. The question was: How do we differentiate our chicken and heighten the perception of its superiority? The competitiveness of the claim was just a way to do it.”

While Lynch could not divulge specific traffic and sales figures resulting from the promotion ahead of AFC’s earnings report, he characterized the consumer response as “remarkable.”

Popeyes communications manager Karlie Lahm said the “Love That Chicken” contest, which asked the chain’s fans to share online why they loved its signature Bonafide chicken, received 5,822 entries and that its website got more than 10,700 visits. After the Aug. 25 announcement in Times Square, the contest website forwarded visitors to the Popeyes Beat KFC site, which garnered 28,500 hits and solicited more than 2,000 votes for contest finalists. Half the visitors came to the Popeyes Beat KFC website directly, she said.

“We had a webinar to announce this to the whole system about two days before the big announcement in Times Square,” he said. “Not only was it watched by hundreds of [franchisees] here, but I was in Asia a week later, and our operators there told me they were up at 2 a.m. watching that webinar.”

Everyone loves a winner

As the “Love That Chicken” campaign played out through September, consumer research firm YouGov BrandIndex noticed a significant rise in Popeyes’ quality, satisfaction and buzz scores, which the firm tracks by interviewing thousands of consumers every day about hundreds of brands.

BrandIndex found that Popeyes’ quality score — calculated by asking consumers to rate a brand’s product quality as “good” or “bad,” then subtracting the number of “bad” answers from the number of “good” — rose from 14.6 on Aug. 31 to 27.4 on Oct. 1. Also, the disparity between Popeyes’ and KFC’s quality scores narrowed from a gap as wide as 17 points to just 3 points during that time frame.

“That’s all a good combination,” Marzilli said. “If you’re increasing buzz, people are taking note of the campaign and the message is sinking in. Satisfaction scores going up tend to imply that people have actually gone to the stores and had a good experience. It seems like they’ve taken action, not just taken notice, based on the ad campaign.”

Lynch said the transition from Popeyes’ marketing focused on the taste test to future campaigns, like the one in November for its Crawfish Festival, should be smooth because the contest with KFC wasn’t the point of this past effort. It was just the means for talking about Popeyes’ core product and Louisiana heritage, he said.

“The driving force of the campaign was not so much a competitive claim, it was about our core bone-in product and our differentiation,” he said. “We have had success with both our core favorites as well as [limited-time offers]. What we’re finding is just the right balance.”

Going forward, the chain also will keep the “Love That Chicken from Popeyes” slogan in its advertisements for the core chicken product, he said.

“The tagline still will be ‘Louisiana Fast,’” Lynch said, “but ‘Love That Chicken’ is such a great equity for the brand.”