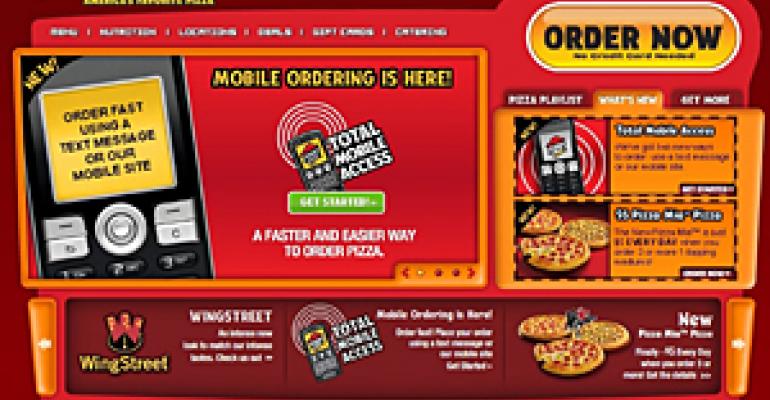 Dallas-based Pizza Hut has augmented its support of Web orders by accepting customer requests via cell phone text message and from the browsers of Internet-capable mobile devices in a move the chain said gives it a competitive edge.

"Our [order processing computer] servers last week were the busiest they've been in eight years, and we think that is due in large part to the interest in Total Mobile Access," Pizza Hut spokesman Chris Fuller said following the chain's Jan. 17 announcement about its support of the new ordering channels.

Total Mobile Access is the name Pizza Hut has given to its initiative to accept text message and mobile device orders in addition to those placed using desktop or laptop computers with Web browsing software and an Internet connection. Fuller said that about 6,200 of Pizza Hut's approximately 7,500 U.S. outlets are participating in the multi-order-channel program and added that the locations not taking part are of the express style or kiosk configuration or are otherwise nonconventional operations.

QuikOrder Inc. of Chicago is supplying the back-end technology that enables Yum Brands Inc.!-owned Pizza Hut to field all three types of customer-entered orders. In most instances, QuikOrder officials said, orders are routed directly into the point-of-sale systems, or POS, of the restaurants involved, improving order accuracy and reducing labor by eliminating the need to manually enter requests from computer, cell phone or mobile device users.

"To put that into context," he added, "you have to keep in mind that each order that is received on the QuikOrder website has to immediately be sent into outer space over a satellite network and then from the satellite into one of some 6,000 [Pizza Hut] POS systems — and this all has to happen in real-time."

Pizza Hut would not reveal what percentage of total sales is now tied to online, text-message and mobile device orders, in aggregate, or reveal any of those order channel's individual contributions to the sales mix. However, Fuller said, "Within five years, we expect 50 percent of our business to come from online, text and mobile orders — obviously, this is a significant and quick-growing segment of our business."

"While our major competitors have either mobile ordering or text ordering, we're the first to offer both nationally," Pizza Hut chief marketing officer Brain Niccol said.

The drive by all three major pizza chains and others in that segment to add more channels supporting guest self-ordering reflects the findings of some that the average ticket for such orders are higher than those generated when store-level employees serve guests by phone or in person. Order channels, such as those dealing with online, text message and mobile device users, also may cost less to support than centralized telephone call centers with specially trained operators, which also typically generate higher than average checks.

Also a motivating factor in the race to add self-service ordering channels: consumer appreciation of the perceived convenience and greater control over the ordering experience afforded by such options.

Fuller said Pizza Hut increasingly is promoting its online presence in general. Related to advertising or promotion of Total Mobile Access and some of its specific components, he referred to the National Football League's upcoming Super Bowl XLII on Feb. 3 and remarked, "You will see it pop up in marketing efforts more and more, especially around the 'big game.' "

To use text message ordering, Pizza Hut customers first must log on to www.pizzahut.com to create a profile and compile a "pizza playlist," or a list of up to four of their favorite pizza varieties or combinations of foods. After that, customers can place an order from their phones by texting to 749488, or 749HUT, a self-assigned code aligned with one of their "playlist" entries.

Texters get a text message in return that confirms that the order has been received, displays the ticket amount and provides an estimated time of arrival for deliveries or the time at which a carryout order can be picked up.

Pizza Hut customers using Web-enabled cell phones or wireless, Internet-capable personal digital assistants, or PDAs, can accelerate the order process by calling up their playlist once they are online. But they also can assemble their order from scratch by navigating the chain's website as if they were on a desktop or laptop computer, as the web pages are displayed in a format suitable for the small screens found on cell phones and PDAs.

Trying to simplify the use of its two new ordering options, Pizza Hut has loaded on its website a multimedia tutorial. The educational message with audio track and animation walks Internet users through the steps needed to register their cell phones or mobile devices, compile and store playlist entries and learn shortcuts tied to text message orders.

Shortly after Pizza Hut trumpeted Total Mobile Access, Domino's publicized a revamping of its website at www.dominos.com that increases the emphasis on Internet and mobile device ordering. The Domino's site includes shortcuts to get mobile device users up to ordering speed faster, including the option to have text messaged to their PDA or Web-enabled cell phone the URL for the mobile ordering service; that step eliminates the need for users to manually enter the address in their browser software.

Papa John's at its www.papajohns.com website, too, offers a multimedia demonstration of how to use the chain's text-message-based ordering service, as well as a series of answers to related Frequently Asked Questions, or FAQs.

Fuller of Pizza Hut said the chain took about a year to finalize the shape and form of its text message and mobile ordering services. He explained that much of that time was spent doing "extensive consumer research to find out what was convenient and easiest for them to use."

That research and other studies drawn on by Pizza Hut indicates "that the people who are texting and using mobile devices now are 18 to 25 years old," Fuller said. "We'd expect those people to be the early adopters"  of Total Mobile Access, he continued, "but we're also finding it has appeal to people outside that age range."

Pizza Hut's technology provider QuikOrder has provided online ordering support to some of the industry's largest pizza chains since 1999 but recently began offering its services to individual restaurants and chains of all sizes and types. Among other technologies, some of which are patented, QuikOrder has global positioning science-based tools that help quickly match Internet users looking to order food with the closest participating restaurant.

Neither Pizza Hut officials nor representatives of QuikOrder, at www.quikorder.com, would discuss the financial arrangements between the two companies.

QuikOrder sources said that, in general, a deployment involving the company's standard template runs $250 per location, with ongoing fees equal to 5 percent of each order processed, or 10 percent of cell phone orders for which QuikOrder has to pay carrier fees. They added that volume discounts can be applied to such standard pricing and indicated that larger customers may get custom features for free or at reduced development rates.

The QuikOrder representatives also said that the company offers interfaces to popular POS systems or, if the customer prefers, standalone order-output stations with printers or support for Internet Protocol printers.