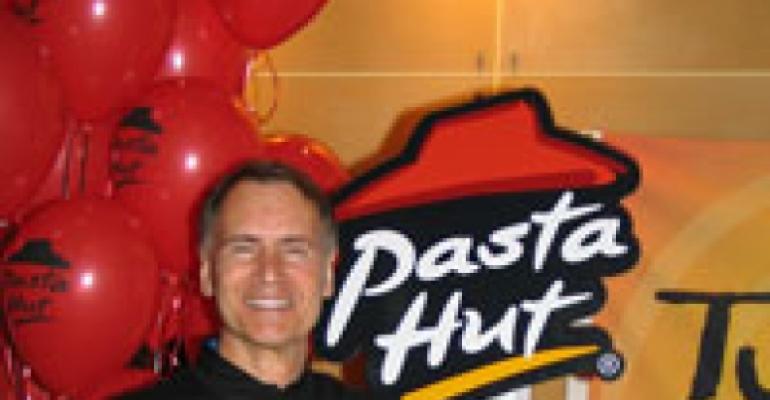 DALLAS Pizza Hut is temporarily changing its name to Pasta Hut in a promotional tie-in to its new family-sized pasta offerings.

The new Tuscani Pastas, which also are available for delivery, were introduced at press conference Monday by Scott Bergren, chief executive of Pizza Hut, a division of Louisville, Ky.-based Yum! Brands Inc.

To promote the new pastas, the exterior signage at Pizza Hut's Dallas headquarters facility has been temporarily replaced with the new Pasta Hut logo, and the company’s print, television and website advertising are now proclaiming “Pizza Hut is now Pasta Hut.”

“We know we can do $1 billion in sales in this product alone,” Bergren said of the new pasta.

Two types of pasta will be offered initially: Creamy Chicken Alfredo and Meaty Marinara. Both feature rotini pasta, and sauce and cheese are added to the pasta before it is oven-baked. Each 3-pound serving of pasta costs $11.99 and includes five breadsticks.

Teaser ads of an imploding Pizza Hut red-roof unit are running this week. Pizza Hut also will promote the pasta with a hidden camera taste-test ad, filmed at Provence Restaurant in New York, that begins running on Sunday.

Chris Tripoli, owner of the AlaCarte foodservice consulting group in Houston, said the Pizza Hut move into pasta offered a number of advantages.

“It plays to their strength, delivery,” he said, “It speaks to the guests' same occasion as pizza delivery [eating at home]. It should broaden their appeal among their established customer base while keeping the product line similar, and it as the same or better price value relationship as pizza.

“Their challenges include ‘perception of quality,’" Tripoli added. “Guests might ask: How good can premade pasta be after it is boxed and delivered?”

Pizza Hut has nearly 6,200 stores in the United States.