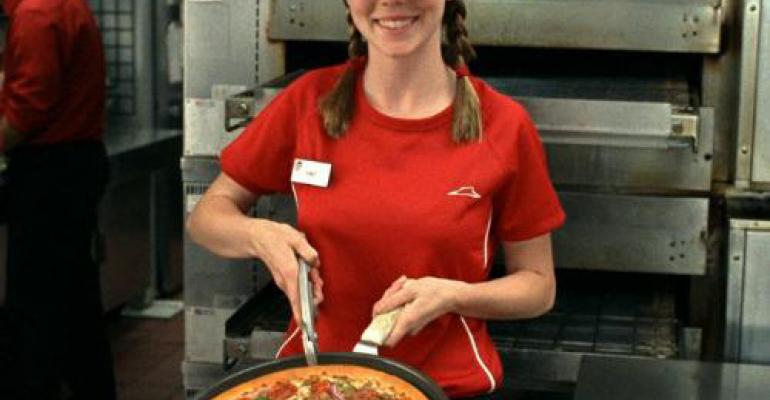 The spots mark a pivot away from Pizza Hut’s advertising focus on its $10 any-size-pizza deal toward a branding effort centered on employees’ favorite foods and moments with their guests. The chain’s biggest rival, Domino’s Pizza, has scored a public-relations coup and increased sales all year with its “Oh Yes We Did” campaign, in which its executives and employees tout the chain’s authenticity and its decision to reformulate its old recipe.

By turning the camera on eight employees, whose ages range from 17 to 29, Pizza Hut is shifting the emphasis off price points and new products to get consumers focused on the dining experience at the Dallas-based chain. Pizza Hut said the stars of the new commercials were chosen from hundreds of employees who submitted videos sharing their favorite Pizza Hut stories.

The new “Your Favorites. Your Pizza Hut.” tagline, which replaces “America’s Favorite Pizza,” also allows for the brand’s increased attention on its WingStreet wings and Tuscani pastas.

“With our new brand campaign we really wanted to hone in on what sets Pizza Hut apart,” said Kurt Kane, Pizza Hut’s vice president of marketing. “Pizza Hut customers know that they’ll get great-tasting pizza, pasta or wings from us. But what keeps them loyal to the brand is a connection between our food and the special moments in their daily lives. Whether it’s family pizza night or a get-together with friends; at Pizza Hut we believe every moment deserves to be a favorite moment.”

Pizza Hut developed the new campaign with The Martin Agency, which won the account last December to replace the chain’s longtime agency of record, BBDO.

For its second quarter ended June 12, Pizza Hut recorded an 8-percent increase in same-store sales, contributing to flat systemwide same-store sales in the United States for parent company Yum! Brands Inc. Pizza Hut, which recently simplified its pricing structure to sell most medium pizzas for $8 and large pies for $10, has competed with Papa John’s Pizza on price for much of the year. Louisville, Ky.-based Papa John’s promoted its own $10 deal through the first half of the year.

Domino’s also tied a value offer to its new pizza — two medium, two-topping pizzas for $5.99 each — this year, and logged same-store sales gains of 14.3 percent in its first quarter and 8.8 percent in the second quarter.

“Value advertising is easy for the consumer to digest, but with branding it’s harder to measure the immediate effects because people aren’t rushing in to buy that specific pizza on special,” Marzilli said. “Value advertising tends to be overemphasized because it is so easily measurable, and I think having branding advertising is an important complement.”

He added that Domino’s may have an advantage in getting traction with authenticity-centric ads since it produced theirs before Pizza Hut’s new spots, but Pizza Hut can still get many benefits from the commercials and the new tagline.

“By saying ‘your favorites, your Pizza Hut,’ it’s a way for them to hold on to saying that they serve America’s favorite pizza and that now you can get it your way,” he said. “Trying to combine the mass appeal across the country with the individualization that person can have is a potentially powerful message.”

Pizza Hut, which has more than 10,000 restaurants in more than 90 countries, will release behind-the-scenes videos of its employees participating in the campaign on its website in coming weeks.