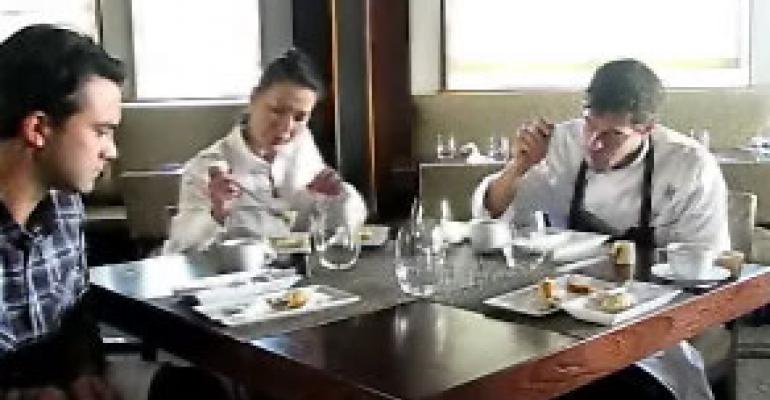 Picking out local food not so easy

A blind taste test comparing local and non-local food and wine resulted in some surprises recently.

Nation’s Restaurant News gathered a panel of chefs at Elements restaurant in Princeton, N.J., and compared two prune plums — one from a supermarket and one locally grown — an organic chicken from Colorado and another organic one raised on a central new Jersey farm, the hearts from those two birds, and lamb grown on an organic farm in central New Jersey served beside a Colorado lamb bought at a supermarket.

New Jersey wine made with Bordeaux grape varietals was sampled alongside an actual French Bordeaux.

VIDEO: Chefs talk about why they choose local

Truth be told, it’s not easy to compare apples to apples, or in this case plums to plums, chickens to chickens, lamb to lamb and wine to wine. And this was not a scientific study, by any means.

One set of plums was a little riper than the other. But still, the riper fruit was bought at the farmers market and the panel thought they tasted a bit over the hill, so the tasters assumed they were from the supermarket and had sat there for too long.

In fact, bigger operations often can turn product faster, resulting in fresher food. In this case, it was the farmer who had sold older fruit. It was brought a day before the tasting around the corner from Elements at a popup farmers market.

The tasting sparked a debate among the panelists on how to tell local products from food shipped from farther away. They assumed that the local items should taste better, but time after time, that wasn’t the case.

The bigger chicken, which came from a nearby farm, was cooked for the same amount of time as the smaller one bought at the supermarket, so if anything, it should have been the one that seemed less cooked. But in fact it seemed overcooked — the breast looked to have less fat in it. Both had been brined overnight in the same solution, and they were about the same price.

The lamb shanks that were braised in the same sauce – a light tomato broth with garlic and rosemary — came out about the same. However, the larger lamb, from Colorado, was fattier and more flavorful than the local lamb, so the panel thought it was the one from New Jersey.

Both had been cooked until the meat almost fell off the bone, so texture wasn’t an issue. Of course braising in a flavorful sauce isn’t a great test, since that kind of cooking can make almost anything taste good. But lamb chops weren’t available at the local farm — a reminder that supply is often an issue when it comes to local products.

The local lamb also was about three times more expensive than the Colorado lamb.

With the chicken hearts, the inexpensive batch from the supermarket was just as delicious for most of the tasters as the one from the organic farmer. That could be because both were cooked well by Elements’ staff, and good cooking techniques is always key.

But the wine from New Jersey beat out its French counterpart. Both were about the same price. Each contained Cabernet Sauvignon, Merlot and Cabernet Franc grapes.

Lesson learned — local food and wine, which is one of the hottest trends in the industry today, may be mostly hype. Local foods that are freshly picked can be outstanding, but that can be true of items from around the globe.

To read more about local-sourcing issues and how they are affecting national chains, read "Local sourcing proves problematic for large national chains" from the October 18 issue of Nation's Restaurant News.