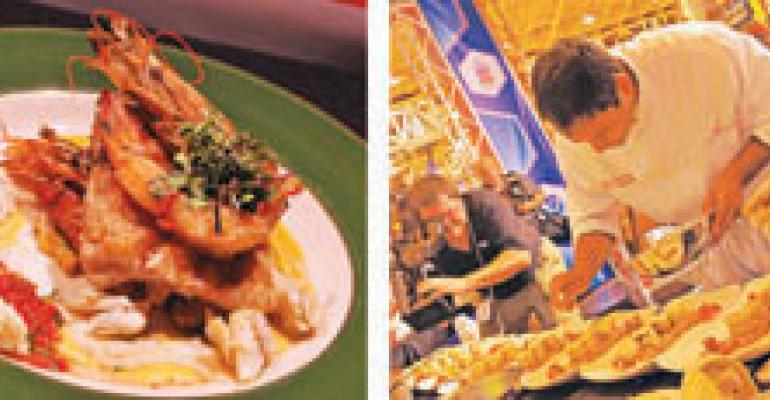 When homely sheepshead and paddlefish appear on the list of entries at a culinary contest, it may seem as if contestants think judges will give extra credit for ugly fish.

But for the chefs presenting less attractive or lesser-used species at the sixth annual Great American Seafood Cook-off held recently in New Orleans, flavor is all that matters. The competition, which is designed to encourage use of local and sustainable varieties, mandated that chefs use fish harvested from their state’s waters.

Chef John Varanese, chef-owner of Varanese Restaurant in Louisville, Ky., used paddlefish available both wild and farm-raised in the Bluegrass State. Paddlefish is often used just for its roe, but with his contest entry, Varanese aimed to make better use of the fish.

“That’s a lot of meat left unused, and that’s not too sustainable,” he says.

“I really like paddlefish, though I know it’s a stretch for some people,” he adds. “It’s sort of mild like catfish, but with a bit more muddy flavor. The texture is really nice: steaky and flaky at the same time.”

To offset some of the paddlefish’s muddiness, Varenese filleted its thick sides thinly enough to form into roulades, stuffed them with a blend of chopped freshwater prawn, onions and celery, and rolled and tied each with butcher’s twine. After pan searing them, he finished them in the oven and sliced each into discs placed over tomato and spice-infused risotto.

“People are catching on to new varieties, but it’s slow,” Varanese says, referring to other abundant native-Kentucky species, such as bass and bluegill. “I think a European market would appreciate this much more because, for them, everything doesn’t have to be mild in flavor. Sometimes in America, people don’t want their fish to taste like fish.”

Tory McPhail, executive chef at Commander’s Palace in New Orleans, won the cook-off with a Creole seafood mixed grill that featured the not-so-pretty-face of sheepshead. The nearby Gulf waters are teeming with the big-toothed breed, which McPhail says costs less than $5 a pound. He garnished small grilled fillets with whole grilled Gulf prawn and lumps of crab.

“We’re exploring right now,” McPhail says, regarding his seafood choice and what winds up on the menu at Commander’s.

Like Varanese, he says most guests buy fish types that they know, though some do experiment.

“We like to float around the outside margins and change things some, but people are always going to come into Commander’s for standards they expect.”

Chef John Folse, owner of Laffite’s Landing in Donaldsonville, La., says broad seafood preferences change slowly and only after people living in a particular region begin cooking, eating and praising local—read “humbler”—varieties. Recalling the redfish rage of the 1980s, when blackening was in vogue, he says tourists to Louisiana caught on and requested redfish when they returned home. Folse dodged the chance to predict the next “fish of the moment,” and blamed the challenge on the bounty available in seafood-centered Louisiana.

“The order of the day is what you catch that day in Louisiana,” says Folse, who helped emcee the contest. “Sometimes down here it doesn’t matter what you catch, but how you prepare it. We’re starting to see more global flavors in our fish cooking, like the tandoori snapper I had last night. It’s not just what we know in Louisiana, these influences are from all over the world, new flavors being painted on our local seafood.”

Struggling to choose from a wide range of fish is a problem chef Ed Fischer never faces as co-owner of the North Fork Mountain Inn in Petersburg, W.Va.

“There isn’t a lot of fresh fish locally because of our location” in the Appalachians, he says. “So we have to rely a lot on the fresh produce and other ingredients we can get to make the fish we have more interesting.”

Fischer’s catch for the contest was golden trout, a species brought to the state’s streams about a century ago for sport angling.

“It’s a very popular fish, it’s unique and it’s sustainable,” Fischer says. The breed spawns and hatches its offspring at state controlled fisheries, and then mature offspring are trucked to open streams.

“Golden trout is a very mild trout,” he says. “I think that’s part of why people like it.”

Fischer coated his skin-off fillets with panko before sautéing them in butter. A sautéed blend of fresh morels and ramps were added along with red peppers and caramelized onions. The sauce, made from a French Burgundy, bore a nod to Fischer’s background as a master sommelier.

Patrick Hoogerhyde, chef at Wild Fin Sea Grill in Anchorage, Alaska, played it safe in the contest by cooking king salmon. But he admits he’s much more interested in lesser-caught and, arguably, uglier, fish varieties now showing up aboard local boats.

“In our area there are more than 30 species of rockfish and 18 species of skate,” says Hoogerhyde, whose salmon cooked in birch syrup and garnished with low-bush cranberries landed a third-place finish. Ample supplies of both fishes make them a great catch for cost-conscious chefs looking for something new.

“Here’s something that comes from our waters, a highly sustainable and affordable resource that everyone’s throwing away,” he says. “That’s crazy.”

Hoogerhyde believes customer perception changes when chefs develop attractive preparations for unusual fish. He called rockfish “a lot like cod” and says it can be prepared the same way. Though he’s seen skate prepared with wine and lemon sauces, “you can just dust it in cornmeal and fry it,” he says. “It’s great like that.”