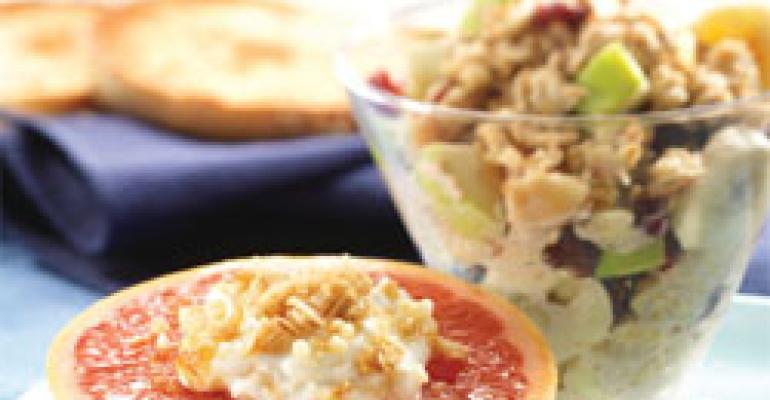 Painting the picture of health

While it’s perfectly fine to promote more healthful or nutritious meals, foodservice marketing executives agree, ads that come off as too “preachy” or that insult people who have a weight problem will alienate the very audience restaurants are trying to reach.

Consider a TV spot for Subway’s new Black Forest Ham and Tender Roast Beef sandwiches, which have 8 grams of fat. The spot promotes the subs as healthful alternatives to the fattening meals found at the fictional Burgertown chain.

In the spot, an accountant at a business is examining an employee’s expense account and demands a receipt from him for his lunch at Burgertown.

He doesn’t have one, and instead asks, “Can I just photocopy my butt instead?”

The accountant motions for him to turn around. He gets a good look at the employee’s butt and says: “Hoochie mama. Yeah, that’ll work.”

A voice-over describes how diners will “pay in the end” from eating double-burger combos instead of Subway’s lower-fat sandwiches.

The spot ends with the employee crashing through the photocopier as he tries to copy his butt.

Subway tested the ad in storyboard form and ran into a problem.

“Consumers thought it made too much fun of the guy,” said Tony Pace, chief marketing officer for the Subway Franchisee Advertising Fund Trust.

That didn’t deter Subway from running it. As Pace said, “you’ve got to be willing to take some risks.”

With the right casting of actors, the situation became funny without demeaning the employee—or, by extension, consumers—who would benefit from a lower-fat meal, Pace said.

“It turns out to be a great spot,” he said. It is the latest in a series of ads that poke fun at competitors while positioning Subway’s lower-fat sandwiches as meals that won’t put extra pounds and inches on customers.

Milford, Conn.-based Subway, which has nearly 29,000 units worldwide, last year launched its Fresh Fit “better for you” meals, which follow the American Heart Association’s approach to healthy lifestyles. The adult meal includes a 6-inch sub with 6 grams of fat or less and more-healthful side dish choices.

In one spot a couple pulls up to a quick-service drive-thru. “Can I have the love handles, double chin and some blubber?” the man asks.

The woman orders the same thing, except she substitutes “thunder thighs and a buh-donk-uh-donk butt” for the blubber.

Another ad spot is set inside a corporate meeting room. An employee interrupts to ask whether anyone wants lunch from Burgertown. The workers order such menu items as the “Can My Butt Look Any Bigger Meal” and a “Bucket of Please Keep Your Shirt On.”

A lighthearted approach is needed to sell healthful meals, Pace said, but caution is called for.

“When you do humor, you have to be interesting, and you’re trying not to insult people,” he said. “We didn’t choose heavy people for those spots.”

Subway, of course, broke ground in the “better for you” marketing category with its commercials documenting the weight loss of Jared Fogle. He’s not as prominent in Subway’s ad lineup these days, Pace said, simply because viewers like to see new commercials about eating better.

Chains like to use humor in marketing healthful meal alternatives because it can deliver a serious message without seeming to be preachy about it.

Chipotle Mexican Grill has long relied on witty, irreverent print ads to sell burritos, but two years ago it broke a campaign with the words “Honest Ingredients” added to its print ads and billboards.

The campaign was an extension of the chain’s “Food with Integrity” positioning and retained the irreverent and edgy tone of Chipotle’s traditional “burrito and a headline” print ads. Spokesman Chris Arnold called the ads “humorous but not preachy.”

Arby’s also had fun in its TV spots when it launched Chicken Naturals, a product line made with all-natural chicken.

The spots used lookalikes of Hollywood celebrity Joan Rivers and wrestler Hulk Hogan to depict their “unnatural states” —Rivers without cosmetic surgery and a skinny Hogan who seemingly had never pumped iron—to point out that all-natural chicken was better than chicken injected with water, salt or phosphates.

The Subway, Arby’s and Chipotle ads benefit from breaking at a time when consumers are paying more attention to healthful meals than they did in the past, when McDonald’s advertising failed to sell the McLean Deluxe and Taco Bell’s spots could not persuade consumers to “run for the border” and buy the Border Lites menu items.

Some restaurant chains today, however, find they can promote health and nutrition without resorting to expensive media campaigns. The Sweet Tomatoes and Sou-plantation concepts, owned by San Diego-based Garden Fresh Restaurant Corp., encouraged their customers to keep their New Year’s resolutions about leading healthier lives with a promotion offering free one-year memberships to Healthyroads, which provides Web-based coaching programs to meet health goals.

TV commercials, whether funny or solemn, have the potential to spread health and nutrition messages to millions of consumers, especially for national brands. Boston-based Au Bon Pain, which has more than 220 U.S. and foreign bakery-cafes, prefers a more subtle approach than flashy TV ads.

“We call it ‘stealth health,’” said Thomas John, executive chef and senior vice president of food and beverage. “We do not tell people, ‘This is low-fat or low-sodium.’”

One stealth-health move was to reduce the amount of sodium in a 12-ounce serving of broccoli-Cheddar soup to 1,000 milligrams from 1,380 milligrams without pushing the product on consumers.

The reason for taking a low-key approach, Thomas said, is that consumers simply don’t want to be told to eat something that might be good for them.

When Au Bon Pain switched to all-natural chicken, the chain used point-of-purchase material to inform customers of the change but did not make a big deal of it, said senior vice president of marketing Ed Frechette.

“We’re relying on people and their basic knowledge of what’s healthy or not,” he said. “Our first job is good-tasting food that happens to be healthy, instead of healthy food that may taste good.”

The chain is now testing a muffin made with whole-grain flour that contains more fruit than the standard variety. It’s a “great-tasting muffin,” Thomas said, and “if you don’t tell people it’s a healthy muffin, they buy it for the taste.”

Au Bon Pain wants customers to decide for themselves whether they like healthful meal alternatives. The chain’s My Plate section on its website allows consumers to search for meals to meet their dietary needs. In-store nutrition kiosks provide information about meal ingredients.

Other in-store cues, such as fresh fruits and vegetables visible to customers, showcase the healthful menu items available for meals. Grapefruit and muesli are breakfast options, for example.

Both Thomas and Frechette agreed that no amount of marketing can sell a product with health benefits if it doesn’t taste good.

“People are looking for taste and flavor,” Thomas said. “If [a product] fails on any of these qualities, people are not going to buy it.”

That’s why Au Bon Pain emphasizes product flavor instead of sending a health and nutrition message to consumers.

“The marketing of a healthy product is to make it so seductive that intent of purchase is there,” Thomas said, “and once [customers] buy it, they should actually get hooked on the taste and flavor and keep buying.”

Like Au Bon Pain, grilled-chicken specialist El Pollo Loco has confined its healthful-eating messages to in-store material, but that’s set to change this year with a TV campaign that will “bust the mythology” of health messages, said Karen Eadon, chief marketing officer of the 389-unit chain based in Costa Mesa, Calif.

Specifically, a commercial will point out that fried chicken offered by competitors may be trans-fat-free, but “[trans-fat-free] doesn’t mean healthy,” Eadon said.

“We really point out where there are obvious miscues given to consumers by the competition,” she said.

KFC was the first national quick-service chain to promote its switch to frying oil containing zero grams of trans fats. A TV campaign that broke last spring promoted the “same great taste” of KFC fried chicken while noting that it contained no trans fats.

The tortilla soup has been a “big hit,” Eadon said. Sales of Pollo Choice are growing, but it’s not a big seller.

El Pollo Loco has partnered with Lindora, a medical weight-control program in California, and several items on the menu are certified as Lindora Lean for Life selections.

One of the major ways the chain markets it healthful meals is through sampling programs with health care professionals and school nutritionists so that they can recommend El Pollo Loco’s food to their clients, Eadon said.

In 2006, El Pollo Loco was featured in an episode of NBC’s “The Biggest Loser,” in which contestants vie to see who can lose the most weight. Jon Miller, director of research and development, prepared healthful meals for the contestants.

The chain also participates in healthful-eating food shows and food fairs, Eadon said, because consumers still need to be educated about healthful alternatives despite all the attention such menu items have received.

Some consumers have the wrong idea about what makes a healthful meal, Eadon said. They think fried chicken must be a healthful meal simply because it’s chicken. Others eat a salad believing it’s good for them, even though they load it with fat grams by pouring salad dressing on it, Eadon said.

“I think you have to educate them,” she said. “Some haven’t paid attention [to healthful alternatives].”