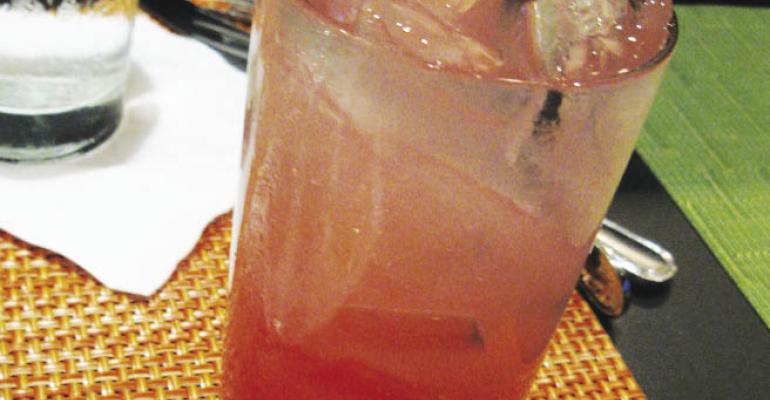 Unaged whiskey, commonly known as moonshine or white dog, is pushing its way into the mainstream and shedding its illicit connotations as bartenders incorporate its bold flavor into classic drinks.

Cocktail aficionados praise the young spirit’s versatility and assertive flavor profile, and guests are intrigued by its rough-and-tumble reputation.

“A lot of people do come in saying ‘I heard you have moonshine,’” said William Davis, manager at Cochon in New Orleans. “I think people come here for it.”

“Since the summer time it’s become one of our highest selling cocktails,” he added.

The word “moonshine” may conjure up images of stills hidden deep in the mountains producing rough, unrefined and illegal spirits. Even the Boss Hogg cocktail at Cochon is a wink and a nod to the fictional villain from television show, “The Dukes of Hazzard,” who illegally distributed moonshine, among his many criminal exploits. And the Midnight Moon used in that drink was developed by Junior Johnson, a NASCAR legend who got his start in fast driving by running moonshine for the family business.

But the spirit is gaining legitimacy as more distillers, in particular craft and boutique distilleries, are bottling and selling their own unaged products.

“It’s very much a new phenomena,” said Max Watman, author of “Chasing the White Dog: An Amateur Outlaw’s Adventures in Moonshine,” a book detailing the history of moonshine in the United States. “There is a whole new segment of the population drinking and experimenting with white dog, and it certainly is very prevalent among the geeky spirits crowd.”

“The definition [of moonshine], in fact the very existence, has changed as laws have changed,” he added. “In early America, there was no such thing as moonshine because it was perfectly legal to distill your own spirits; you didn’t need a license to do it.”

Even use of the label “white whiskey” comes under contention, since some insist the name whiskey can only apply to products that have been aged. “White dog” is a more accurate name for legally produced unaged whiskeys, Watman said.

“I think [increased interest from bartenders] was something distillers weren’t planning on necessarily,” said Damon Boelte, bar director at Prime Meats in New York. “Nowadays with any of us out there mixing drinks up and trying to do the new thing, anything you throw at us we’re going to use in a cocktail.”

“You lose some of that new-grain quality from the whiskey with aging,” he added. “With white dog it’s part of the character, a bolder mouth feel that works better with sharper flavors.”

Boelte described unaged whiskeys not as an unfinished product, but simply a different category that requires just as much attention and care to quality because, “if you can get that white dog down right, then the aging should typically go well” in the making of traditional aged whiskey.

“This is whiskey going straight back to its roots,” said Neyah White, West Coast brand ambassador for Suntory Yamazaki, a Japanese single-malt whiskey. “I look at it the same way as [unaged] cachaça [and] rhum agricole, and pisco is brandy that still tastes like grapes. It’s a whole terroir-driven kind of spirit.”

In his previous position as the bar manager for Nopa restaurant in San Francisco, White worked with several types of white dog. One of the drinks he created was the White Manhattan, which is made with white whiskey, Benedictine, white vermouth and orange bitters.

“The drink is closer to a martini than anything else; the name is definitely misleading,” White said.

He added that white dogs tend to work well with old cocktail recipes. He likes to use white dogs in classic sours because young spirits, with their hotter and bolder alcohol profile, work well with fruity citrus beverages and spirit-forward cocktails.

Derek Brown, owner of The Columbia Room and Le Passage in Washington, D.C., agrees that white dogs and classic cocktails work well together, but cautioned, “It’s important to start off with the knowledge that they won’t produce the same results.”

For example, when using white dog in a whiskey sour, Brown uses less of the spirit than the classic ratio because of its roughness. With lemon juice, simple syrup, egg whites and a few drops of Peychaud’s bitters on the egg white foam, the drink has a different aromatic quality than the usual aged whiskey version.

White dogs can also cross the line between aged brown and white spirits, especially in drinks that call for gin or vodka as a base ingredient. Brown found white dog can replace genever, the predecessor to gin, in certain recipes.

“Even though people wouldn’t think of connecting gin and whiskey, in terms of the texture and the spirit itself, I connect those two.”

“Whiskey is such a diverse category,” Brown added. “There’s certainly a lot of different ones coming out that range in the proof and in terms of the grain or mash they use in it, so all of that will affect the product. Not all white dogs are equal.”

At Prime Meats, Boelte swaps out gin in the classic The Last Word cocktail for his The Good Word, shaking a mostly wheat-based white whiskey from boutique distiller Death’s Door with yellow chartreuse, lemon juice and maraschino liqueur. The result is a drink that is so popular it survived five menu changes.

“I actually did take it off the menu at one point, and a few people that constantly drink that drink threw a fit.” Boelte also experimented with using white dog in classic cocktail styles that span a wide variety of spirit categories like a lemon Crusta, a Bloody Mary using green tomatoes and celery bitters, and in a julep, which Boelte described as “a kind of old-school Georgia julep.”

He also found that white dog works in dessert cocktails with heavy Madeiras and Ports. Its versatility stems from white dog’s transformative effect in drinks.

“There are times when I’m using a rye in a drink and rather than cutting down alcohol … if I split that and do one and a half ounces of rye whiskey and a half ounce of white dog, it makes a really cool thing happen where it adds extra viscosity to the mouth feel and a certain creaminess.”

A little bit will go a long way, and knowing what you’re working with is important in getting the most out of white dog. Boelte pours it with caution.

“Go by classic guidelines with sours, fixes, daisies. It’s really that balance you want in the end,” Boelte said. “It’s not a neutral spirit per se. Working with that and another spirit and the rest of your ingredients in your cocktail really works when you take a delicate approach to it.”