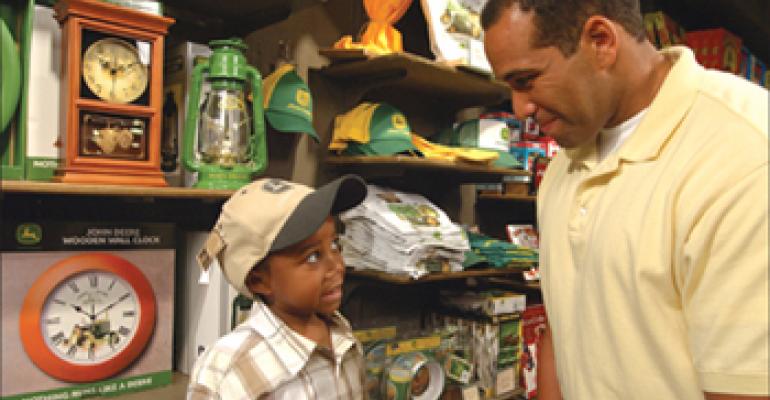 Operators say the kids are all right

Revamping, revitalizing and re-energizing are the watchwords of family-dining establishments working to keep a vice-like grip on their core customers—families with kids in tow.

With increasing competition from fast feeders offering beefed up breakfast menus and casual dinnerhouses luring away parents who want a beer with their burger or a glass of wine with their fettuccine, family-dining chains are rethinking their kids’ menus and improving kids’ programs to better win over pint-size patrons, who often decide where the family eats.

“More than half of the time, kids are the deciding factor on where to go eat,” says Darren Tristano, managing director at Technomic, a Chicago-based restaurant consulting firm. “And kids are very much affected by marketing.”

According to Technomic’s 2006 Understanding Kids’ Menu Report, nearly four of 10 parents, or 39 percent, take their kids out to eat once a week or more. Of those heavy users, 26 percent visit only limited-service restaurants, while 4 percent dine solely at full-service operations. Technomic executives say time constraints, lower-priced meals and entertainment options likely play a role in parents’ dining-out decisions.

For family-dining players, the need to boost traffic is pressing, Tristano notes.

“This segment has been very, very flat over the past four or five years,” he says. “It’s been kind of a tough opportunity to grow and a tough segment to compete in. There aren’t many major chains growing. It’s a place to go for breakfast and, sometimes, lunch and dinner.”

In an effort to bring in more customers, family-dining operators are retooling strategies to keep their brands in the forefront of children’s minds. Executives are revamping menus, revitalizing programs aimed at children 3 to 12 years old and refining kid-targeted marketing and activities.

For instance, Shari’s, Friendly’s and Denny’s have tweaked their kids’ menus. Nearly every company in the segment has added healthful options to its kid-oriented offerings. Meanwhile, such others as Cracker Barrel Old Country Store have begun offering activity books to help cut down on squirming while children wait for their food. IHOP and Cracker Barrel also are expanding their advertising campaigns.

David Archer, vice president of marketing at Shari’s Restaurants, says the 27-year-old chain is enjoying the fruits of kid-based initiatives that started in 2005. At that time, Shari’s began offering kids a free “Cookie on a Stick.” Chain officials also “totally revamped the kid’s menu,” he says, by adding more healthful options, such as vegetables, fruit and applesauce to accompany meals.

“When we added those, there was a massive amount of growth in add-on sales,” Archer says. “Add-ons increased over 200 percent.”

Overall, he says, the 98-unit chain with operations primarily in the Northwest, saw its kids’ menu sales jump 13 percent. To maintain that momentum, executives added a “kids eat free” option with the purchase of a kid’s beverage on weekend nights. The promotion is available every Saturday and Sunday from 4 p.m. to 9 p.m.

“Shari’s isn’t the place families first think of on the weekends, and everyone else was targeting weeknights,” Archer says. “It’s turned into a very popular offering.”

At 520-unit Friendly’s, marketing manager Nancy Polak gathered the opinions of some 500 children to help the Wilbraham, Mass.-based chain upgrade its 10-year-old children’s menu. The result is a flashy, triangle-shaped menu with fold out flaps that was introduced last July. In addition to influencing the shape of the menu, the panel was instrumental in choosing the bright color palette of purple, green, yellow and blue.

“We make the distinction that on some days kids can say, ‘I’m not all that hungry’…and sometimes they might be coming off the soccer field and they are starving,” she says. “We wanted to give the child the chance to decide where their appetite was, and parents like that.” They also like having two different price points, she notes.

Friendly’s also made the decision to bundle a drink, entrée and dessert, which is fairly unique, Polak says. Many chains offer two of those items, but not all three.

The new menu and different portion options led to a 9.1-percent jump in kids’ menu sales, Polak says. “We’re getting both repeat visitors and new guests who have heard about us from a friend,” she says. That success also led Polak to establish an ongoing kids’ panel with 50 representatives from various markets called the Fab 50.

Tristano of Technomic says that most of the innovation coming out of the family-dining segment is in the breakfast daypart, and the leader of the pack is publicly traded IHOP Corp., based in Glendale, Calif.

“The innovation is definitely coming out of IHOP,” he says. “The other operators are focused on execution.”

Patrick Lenow, spokesman for IHOP, says kids are naturally attracted to the 1,302-unit chain, which specializes in pancakes. Nonetheless, IHOP is working to appeal to families looking for lunch and dinner as well as breakfast, he notes.

“IHOP continues to be an inviting place for families with children, due to a couple of factors,” he says. “First and foremost, we have a menu focused on pancakes and breakfast food—foods that kids naturally like.”

In addition, “if kids are noisy and make a mess, no one is going to give them a funny glance,” Lenow says. “We welcome kids of all ages.”

Nearly a year ago, IHOP launched an additional healthy menu featuring items with reduced calories, reduced carbohydrates and reduced fats. The 45-year-old chain saw a bump in sales and decided to incorporate the items into its standard menu by moving it to the back cover.

“It catches more guest attention in that spot,” Lenow says. Those items “aren’t a dramatic part of our sales, but we continue to see a market.” This year, IHOP is plowing additional efforts into national television advertising and expanding its “Come Hungry, Leave Happy” campaign with various promotions. At the beginning of the year, IHOP offered all-you-can-eat pancakes. The chain is in the midst of rolling out a second promotion, this time pushing Cinn-A-Stacks, which are pancakes or French toast slathered in a cinnamon spread and icing. “You’ll continue to see this type of familiar product with a unique IHOP twist,” Lenow says. “It’s part of our effort to help people find new opportunities to visit IHOP.”

IHOP also is rolling out refinements to its takeout operations this month. Takeout makes up just 2 percent of IHOP’s annual sales.

“One of our strategies is to make IHOP more accessible for our guests,” Lenow says. While IHOP has offered takeout for a number of years, the company recently has solidified operational changes to the program and its packaging.

“We went from using generic Styrofoam to new packaging to retain heat better for our guests,” Lenow says. “We went to clear lids. We’re trying to give the guest a better product when they arrive at home.”

Overall, “we’re trying to re-energize IHOP,” says Lenow. “The family-dining category has been a little sleepy, some would say. We’re trying to continue our operational excellence, maximize franchise development and re-energize the brand.”

Like IHOP, Cracker Barrel, which is owned by CBRL Group Inc., relies on the strength of its brand to attract families. The Lebanon, Tenn.-based chain has 555 company-owned restaurants and caters to families looking for home-style meals.

“We are differentiated from the competition because we have both restaurant and retail, and can cater to kids’ basic needs to have fun as well as to eat,” says Simon Turner, senior vice president of marketing and innovation for Cracker Barrel. “Come visit Cracker Barrel, and you’ll see families playing checkers on the front porch…and you’ll see kids playing with the toys in the retail store. No one else offers that kind of atmosphere.”

Cracker Barrel’s marketing focuses on its multigenerational appeal, and seniors are allowed to—and frequently do—order off the kids’ menu, according to officials. To help entertain children who frequent the restaurants more than once a week, Cracker Barrel two years ago added activity books. The chain changes the content of the books frequently.

“We want to make sure that families who visit frequently can enjoy fresh materials,” Turner says.

As part of its effort to attract more customers, Cracker Barrel has revamped its advertising and is in the process of rolling out its new campaign on 1,500 billboards across the country. The company also will test new television ads in its fourth quarter, which starts in May.

“One of our main initiatives this year is increasing the effectiveness of our marketing efforts, and testing TV is part of that,” Turner says. “Historically, Cracker Barrel has not advertised on television, and we are now testing to see whether this is now effective for us.”

Despite such efforts, some industry watchers maintain that many establishments could do a lot more to win over children.

“Most restaurants are not doing enough to attract kids, and they are missing out on thousands and thousands of dollars in sales,” says Joel Cohen of Restaurant Marketing Group in Raleigh, N.C.

Restaurants need to be more proactive and look into their local neighborhoods, which is where they will find children who live and play and are more likely to go to their establishments, he says.

“They need to explore every opportunity on how they can invite children to the restaurant,” Cohen says. “Many restaurants are so entrenched in their operations and marketing that they don’t have the time, ability or vision” to attract the group that will be their future customers, today’s children.

“Customers are volatile,” he says. “They pick and choose where they want to go, and they are fickle. Restaurants need to be proactive in discovering where their new guests are going to come from.”

He suggests partnering with schools and the community—not knocking on the door with preconceived programs.

“They really need to be going out to the community and asking, ‘How can I help you?’” Cohen says.

Many local pizza operators, such as Little Caesars, have taken this approach and have been very successful, Cohen says. Little Caesars gives a percentage of sales to the school, he says, adding, “When they do that, business booms.”