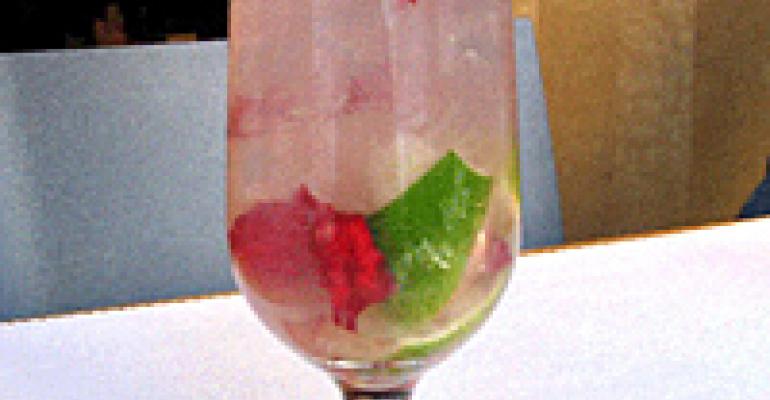 NEW YORK Part of a special seasonal cocktail menu created by Junior Merino for Bombay Talkie in New York, Coming Up Roses is made by muddling rose petals with half a lime. Rose syrup, rose water and raspberry-flavored rum are added and the drink is shaken. After being poured into a glass, Coming Up Roses, priced at $12, is topped off with sparkling wine stirred.

Merino said that he wanted to create drinks that would help encourage appetite, so many of the drinks featured on the new menu have some acidity or dryness. "The whole idea is to have something refreshing that matches the style of the restaurant."

For example, the Amrit is a cocktail made with pineapples, white grapes, lemon, elderflower syrup, sparkling wine and pisco. The Dark Brown Pod is a concoction of tamarind concentrate, lemon, ginger beer, cachaca and a Colombian anise-flavored liqueur called aguardiente. The drink is served in a glass is rimmed with a mixture of salt, brown cardamom, tamarind and a little sugar.

The use of Latin American spirits came from the lack of indigenous Indian spirits on the market.

Merino added, "When Spaniards came from Spain, they brought a lot of ingredients and spices from India to Central and South America."