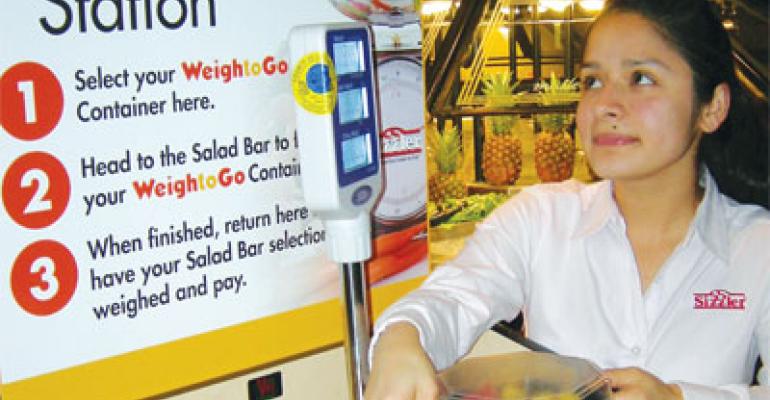 NRN 50: For your convenience

Perpetually time-strapped consumers have been telling restaurants that convenience remains one of their key concerns, and they want foods they can either eat on the run, or take home or to the office. As a result, a growing number of responsive operators have taken action and are benefiting from meeting the needs of these customers.

“Consumers encouraged us to put together a program to figure out a way to use us conveniently,” said Kerry Kramp, president and chief executive of Culver City, Calif.-based Sizzler.

The result, launched as a test last fall, is the steakhouse chain’s new Weigh to Go program. Diners choose anything from Sizzler’s extensive salad bar — which includes more than 51 items as well as specialty salads, soups, hot appetizers and desserts — place it all in eco-friendly to-go containers, and then weigh and pay $3.99 per pound at a cashier.

With Weigh to Go already meeting the chain’s goal of capturing between 2 percent and 5 percent of total sales at the test site in El Segundo, Calif., Sizzler plans to roll out the program to the entire system by the end of 2011.

To meet the needs of its on-the-go consumers, Greenleaf Gourmet Chopshop, a quick-service salad concept with two units in Southern California and products in more than two dozen area gyms and juice bars, doubled the size of its menu over the last two years.

“There’s such a demand for healthy food, but no one seems to have time to sit down,” said Greenleaf chef Kristi Ritchey. “We really tried to listen to consumers and give them what they want.”

So far sales of grab-n-go items have almost doubled, Ritchey said. Among the menu additions consumers are eating up are wrap versions of signature salads, turkey meatballs, stuffed red bell peppers and breakfast burritos. The company also added grab-n-go cold cases to both of its restaurants.

“Fast is the No. 1 thing that consumers want, hence the name fast casual,” said Denny’s vice president of development Steve Dunn, the man who came up with the idea.

“[Denny’s Cafe] gives guests what they want from a Denny’s menu, but fast.”

Two cafes currently are open in California, and the chain has plans to launch additional sites by mid-year.

“It’s not that Denny’s didn’t have portable items ... We embraced what it was about to-go that was important [to consumers],” Dunn said. “The biggest benefit is that it gives customers more options.”