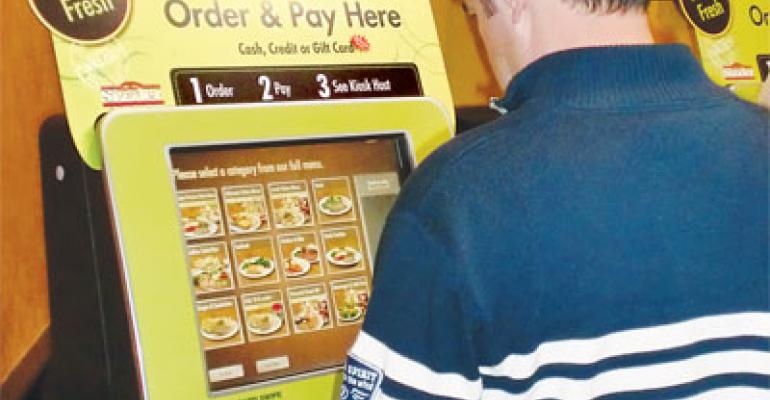 Heading into a recently launched pilot test of two guest self-order kiosks at a restaurant in El Segundo, Calif., the Sizzler grill-and-salad bar chain, which traditionally funnels entering customers to an order counter, set a goal of bumping the $11.97 average ticket by 10 percent to 12 percent.

The Culver City, Calif.-based chain, which has 178 domestic and 85 international locations, was inspired to aspire to that incremental gain by the power of digital upselling. That term refers to the ability to get some guests to spend more through the use of images or video of food, beverages and convivial settings as well as automated text prompts, such as those asking consumers if they want a premium topping on their sandwich or steak, to add a beverage or to make room for dessert.

“We are seeing anywhere from a 15-percent to 20-percent average check lift,” said Michael Branigan, vice president of marketing for Sizzler USA, the chain’s parent, of early results from the use of EMN8 Inc. kiosks in conjunction with Aloha point-of-sale system software. He said the chain plans to expand the test within a month by adding a pair of kiosks to five additional California stores.

Digital upselling increasingly is occurring in a variety of places that impact restaurant sales, including in-store and drive-thru digital signage and Internet ordering interfaces accessible from desktop computers and smart phones, which some operators credit with double-digit increases in average transaction amounts.

Also contributing to higher checks are the promotional food and beverage images and text prompts on the TVs and display screens used by in-restaurant, interactive games systems, such as the NTN Buzztime Inc. technology used in nearly half of the 120-plus Hooters casual-dining restaurants operated by chain franchisor Hooters of America of Atlanta.

Diana Switzer, Hooters divisional sales manager for the northern region, said a survey of guests found that game-system users stayed about 40 minutes longer than other customers of the casual-dining chain and spent about 19 percent more, which she attributed in part to the added promotional impressions on game screens.

“We’ve sold ads to real estate, limo companies and others, and also done trade-outs” for services, Switzer said of another benefit from the promotional capabilities of the game system. “For instance,” she continued, “One of my stores is trading out for lawn service and getting a $100 a month discount by putting its landscape company’s ad on the TVs.”
Jeff Newing of Ala Carte Entertainment Inc. of Schaumburg, Ill., said he, too, could sell outside advertising for the TAP.tv Inc.-provided entertainment television and interactive game network used in his company’s 30 restaurants, bars and clubs in the Chicago area.

However Ala Carte’s director of entertainment said he prefers the full-time promotion of site-specific daily menu specials, catering and private party services and upcoming events, such as “kids-eat-free Mondays” at seven Moretti’s Ristorante & Pizzeria locations.

“Being able to show [guests] photographs of menu items and specials on the ‘pads’ is a big upsell component,” said Trio’s chef-owner, Chris Wishart.

He added that the ability of servers to direct browsers on the tablet computers to winery websites so they can share with customers the producers’ stories “always helps in selling wine.”