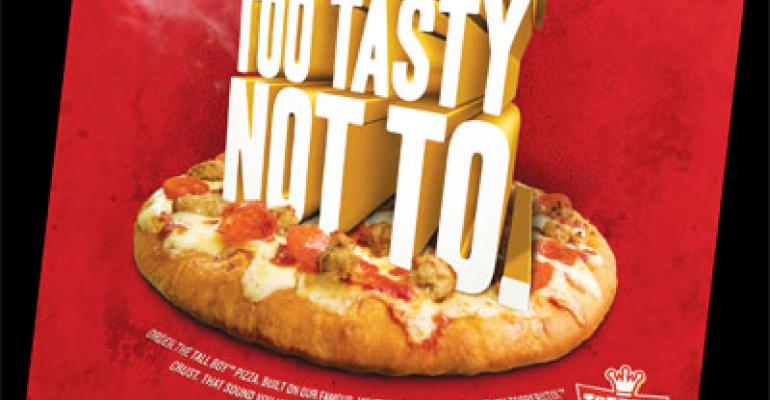 Customers have been involved in the creation myths of some of the most well-known dishes — from the Earl of Sandwich to the patron at Delmonico’s Restaurant in New York City who was said to have given the world eggs Benedict.

More recent — and far less apocryphal — are the several dishes that originated with customers engaged by chains looking to give their fans a stake in the menu development process.

Last year, Papa John’s Pizza and Toppers Pizza featured contests in which customers could submit their own pizza creations to win a spot on the chains’ menus together with free pizza and cash prizes. Toppers’ “Spank Your Pizza” contest received more than 100 entries, and the Facebook-powered tournament crowned Jon “Scooby” Ransom’s Snack as the winner.

Scott Iversen, Toppers’ director of marketing, said the 28-unit chain was the real winner of the contest, based on its ability to turn a small marketing and culinary R&D investment into significant sales and buzz.

The Spank Your Pizza contest basically turned your Facebook fans into your R&D chefs and a focus group.

That’s exactly what it was. We wanted to give our customers the opportunity to share their thoughts, given the toppings we have, on what would make their favorite pizza combination. The contest not only narrowed to the top one that our fans thought would be a great addition, but we also got 100 other possible combinations to look at over time.

The pizzas that finished second, third or fourth — we’ve already got those in our back pocket thinking of future promotions. Which is good because there definitely were some fans of those pizzas that were extremely disappointed.

What did Toppers do to guard against people suggesting only margin-busting loss leaders?

The screening questions that we [asked] once we received the inquiries were: How difficult would that recipe be to execute? Would it be profitable to actually make that? In the advance, we made clear that these [were] the toppings we had available, so for the entries that contained stuff we didn’t have on our menu, we made substitutions.

Did promoting “Scooby’s” Snack benefit other parts of the menu?

One thing that happened through this contest was that we simultaneously promoted the launch of our Tall Boy pizza crust, which was the “unofficial sponsor.” Since the launch, the Tall Boy has represented about 6.5 percent of sales during the 13-week promotional period, and we had anticipated between 3 percent and 5 percent.

Sales were up nicely in the fourth quarter, and we attribute a lot of it to the Tall Boy because it’s a more profitable pizza. We position it as a premium and sell it for $1 more, and 50 cents drops straight to the bottom line. Not only did we increase transactions, but the check average as well.

The big thing we learned in this contest is just how much we can engage people into the Toppers brand and let them feel some ownership … [which] leads to higher loyalty down the road.