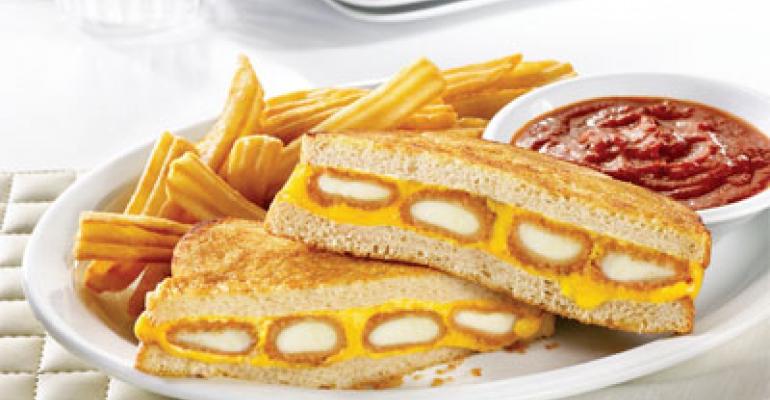 While health-oriented food items have increasingly established a hold on restaurant menus around the country, consumers are sending a clear message to foodservice operators that they should still make room for some highly indulgent, politically incorrect selections as well.

Louisville, Ky.-based KFC was happily on the receiving end of that message last spring when it launched its instant hit, the Double Down — a sandwich featuring two pieces of fried chicken instead of a bun. The quick-service chicken chain sold around 10 million Double Down sandwiches in a month and assumed an unusual status within a larger cultural conversation.

“The Double Down has been a social media juggernaut,” said KFC spokesman Rick Maynard, who cited the sandwich’s surprising presence and popularity in a variety of channels, from “YouTube videos of taste tests to Twitter reviews to Facebook fan pages.”

All of that transformed something poised to be a temporary novelty item into a true consumer force.

And the Double Down by no means stands alone. Similar sorts of extreme food — or “dude food,” as it’s sometimes known — have appeared seemingly everywhere, with a kind of one-upsmanship at play that shows no signs of diminishing.

Denny’s, the family dining chain based in Spartanburg, S.C., for example, had a timely hit with its proudly over-the-top Fried Cheese Melt, which crammed four fried cheese sticks into a grilled cheese sandwich.

“People are always wanting to try something new and especially something they haven’t thought about making at home,” said Denny’s vice president of marketing, John Dillon, who attributed the item’s success to its unique and intangible “talkability.”

Friendly’s, the family dining operator based in Wilbraham, Mass., struck a similarly resonant note with its Grilled Cheese BurgerMelt, which replaced the ordinary burger bun with two grilled-cheese sandwiches positioned on top and bottom of a hamburger patty.

“Our customers know that this is an indulgent item,” said Andre Fuehr, vice president of research and development for Friendly’s. “We certainly don’t expect that people will order items like the BurgerMelt every time.” But the addition of such a calorically
extravagant conversation starter can help enliven a menu and create its own kind of desire.

Asked if the goal of increasing check averages figured into the creation of such a stout sandwich, Fuehr said, “We weren’t looking for that as much as we were trying to promote something that would help drive guest frequency with a cravable flavor profile.”
That kind of craving, of course, isn’t limited merely to flavor. At the small two-unit Dallas-area chain Burger Extreme, patrons can be found craving a different sort of attention than the kind paid to taste.

“We have people come in and ask us to take a picture of them with it,” said Burger Extreme manager Karen Vega. She was talking about the Double Mega Extreme Cheeseburger, which features two half-pound beef patties topped with sautéed onions, mushrooms, jalapeños, American and provolone cheeses, mayonnaise, ketchup, hickory sauce, mustard, lettuce, tomatoes, pickles and bacon.

“Some people ask us to record them with their cell phone while they’re eating one,” she said. “It’s pretty funny.”